Swung by the LHS today and they had just one kit left. While I have one on the way, impulse got the best of me.

I really like the body on the Phoenix, but I wanted something a little more realistic. 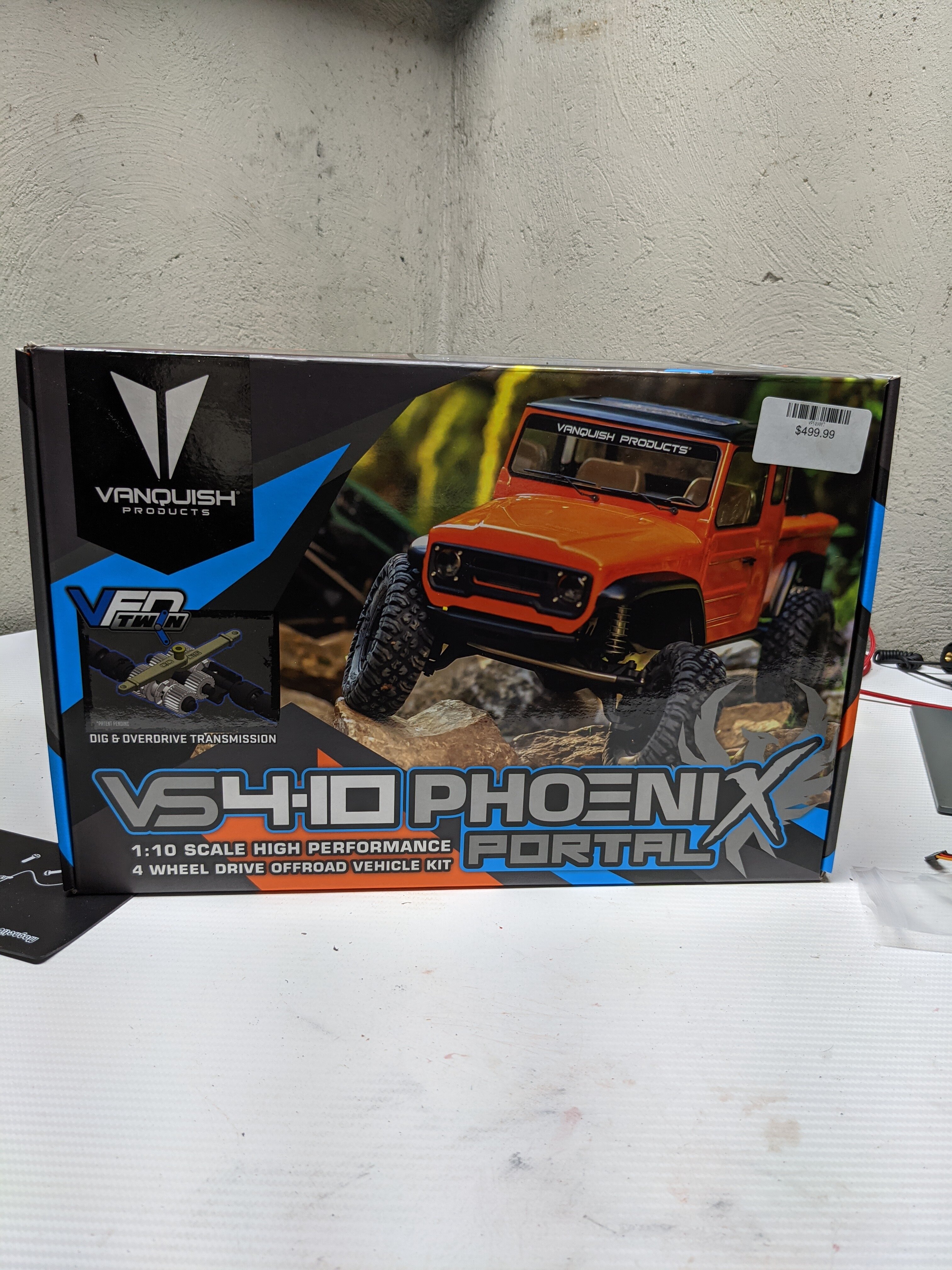 So let's get this started!
K

Front axle went together without much of a fuss. 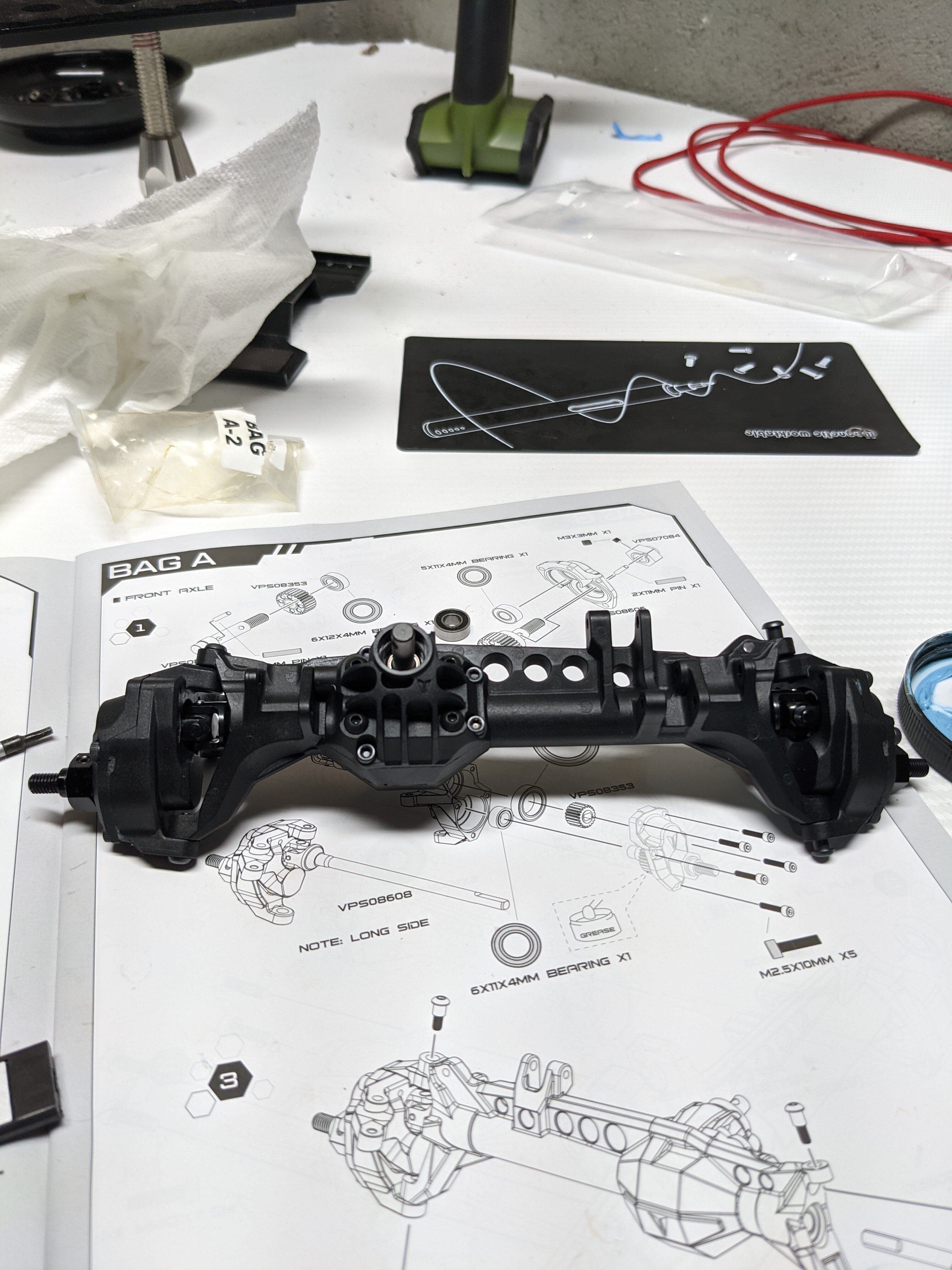 Do you see what I see? Yeah that gave me quite the panic attack. Luckily it was just the bearing that goes on the back of the axle housing. 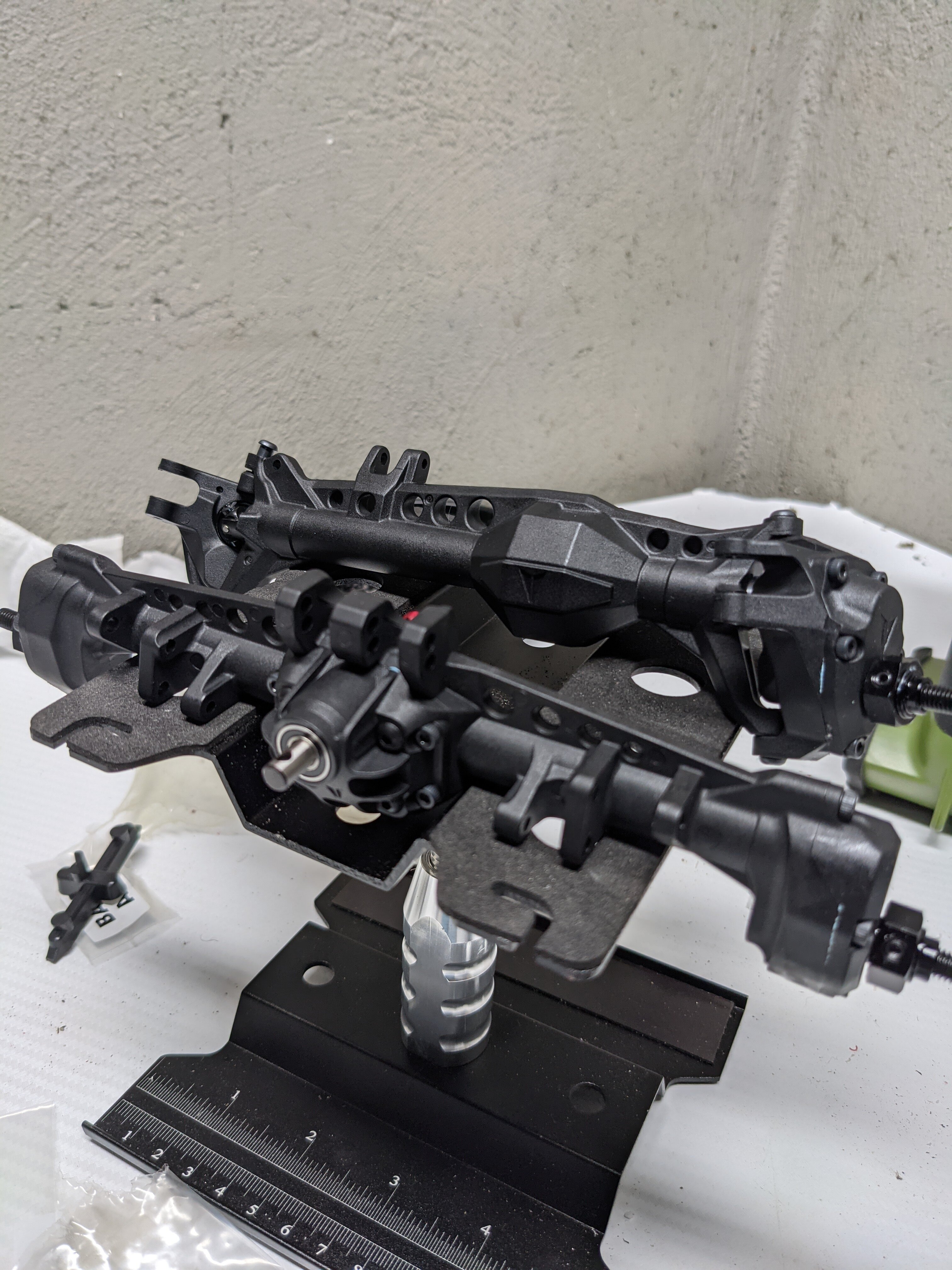 Robbing some parts from my other attempt at a VS4-10 chassis build. Reefs Tripple 4, and a little ESC shelf I printed up. 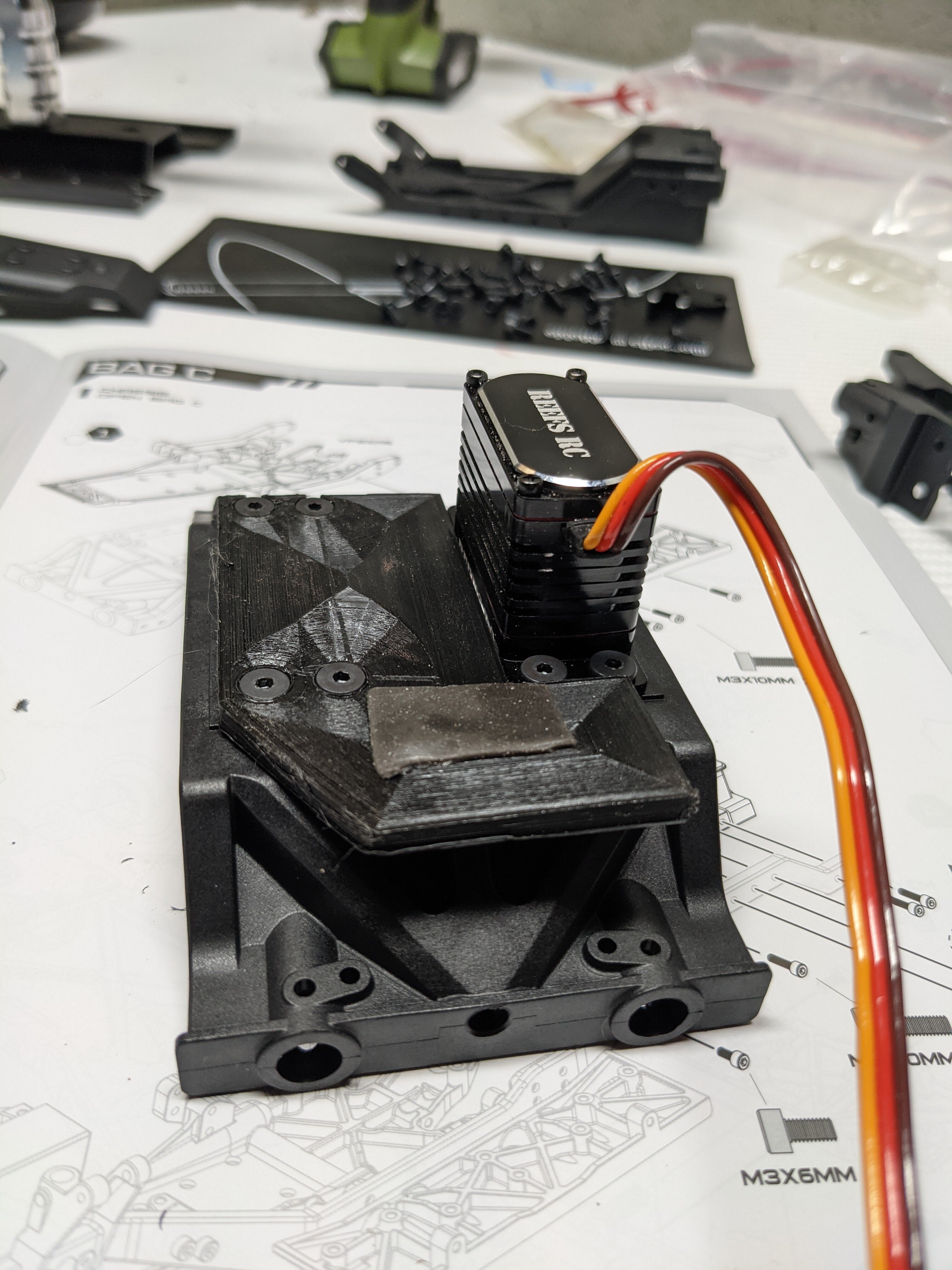 Again, robbed the Incision driveshafts from my other build. Transmission went together semi smoothly. 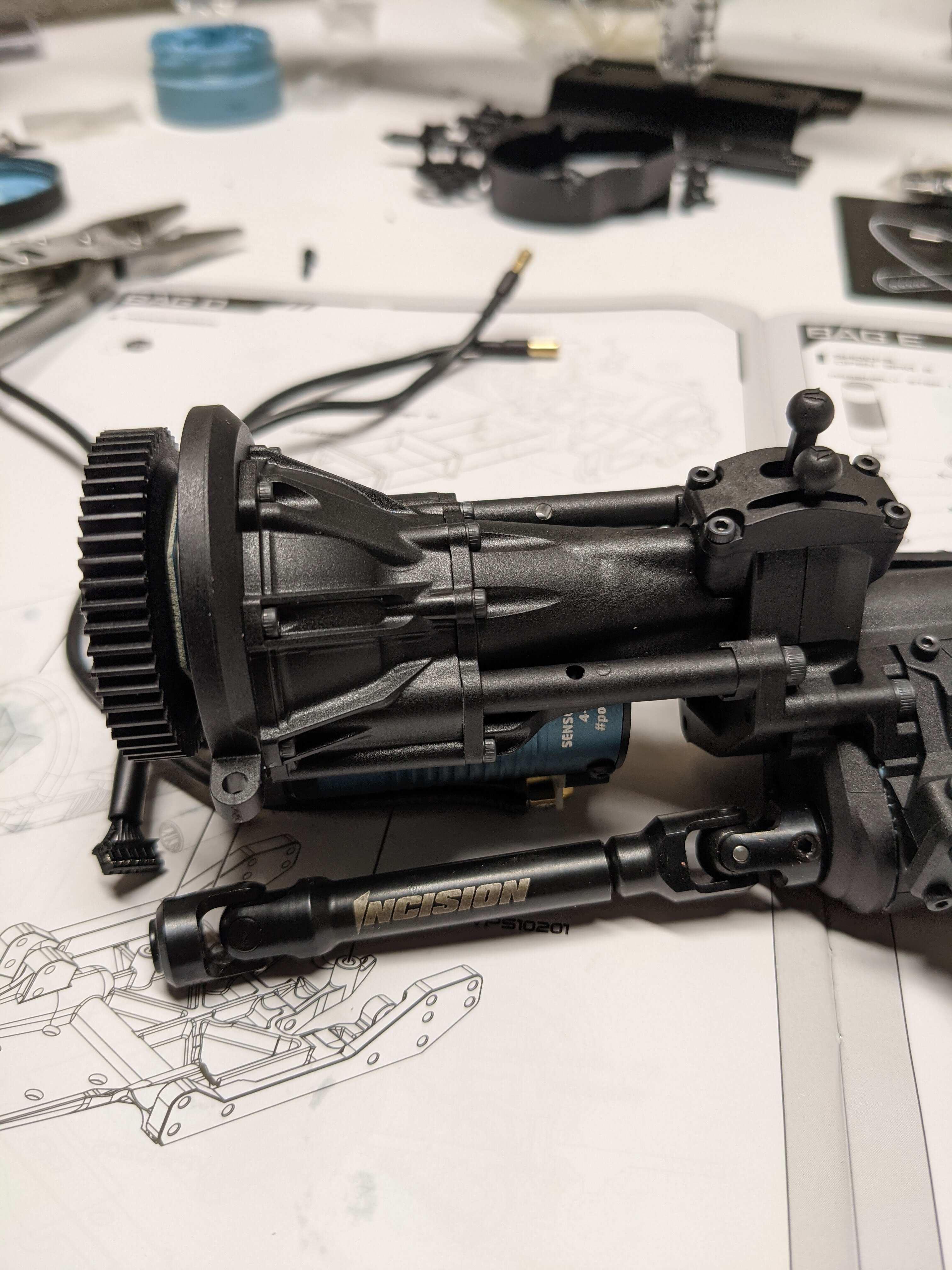 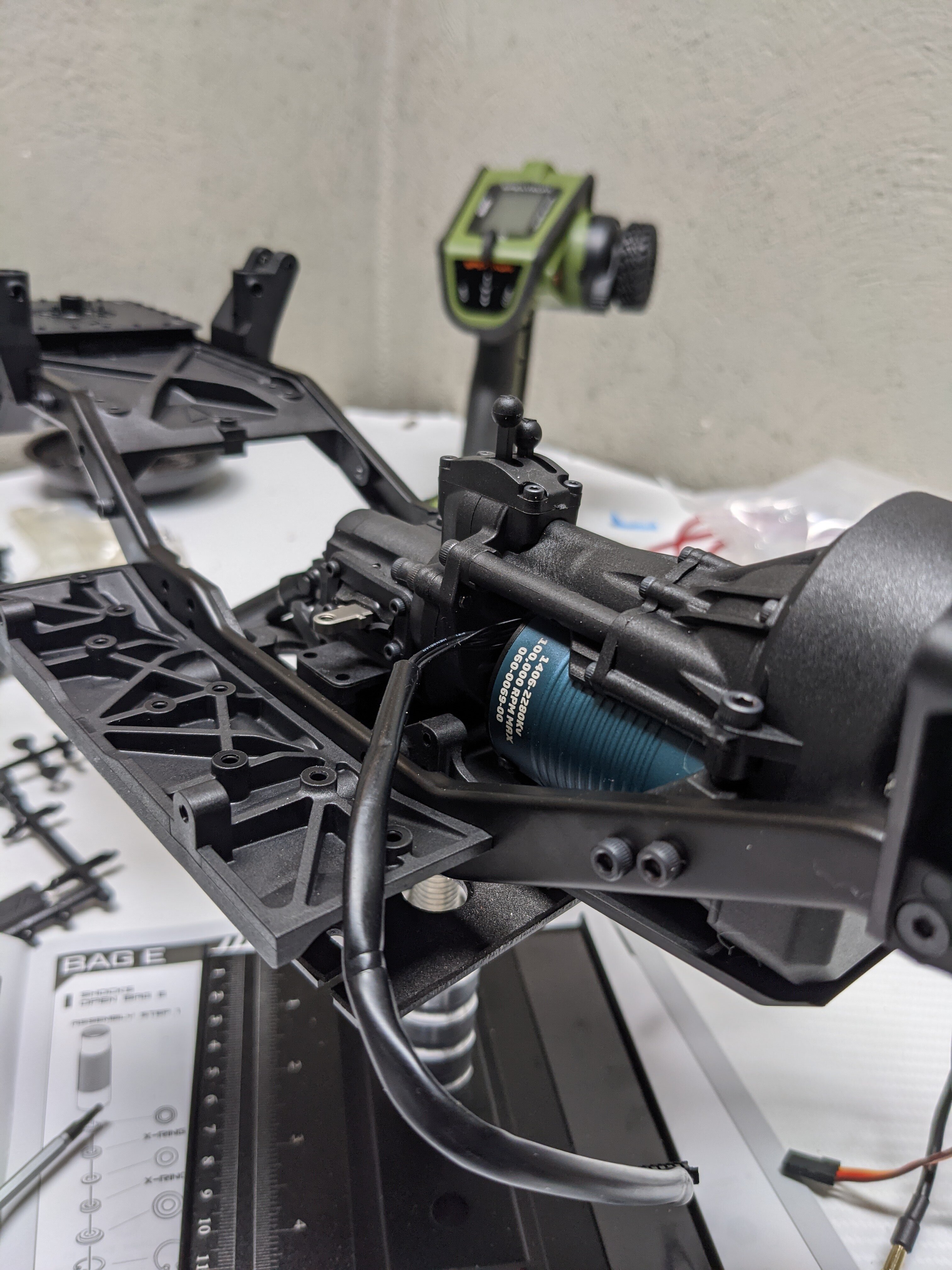 And here's where I left it for the night. The shock collars defeated me... Probably one of the biggest let downs on this kit so far.

All in all a pretty quick build, although I started an hour before the Friday build stream and Harley quickly passed me.

My quick review? It's a nice kit, it's the quality I've come to expect from VP. The axles feel more robust and stronger than the metal straight axles I bought. The transmission is something else, I'm excited to give it a shot.

Back at it again!

I came at the shocks with a fresh set of eyes and hands, took my time and was able to get them to thread on cleanly. 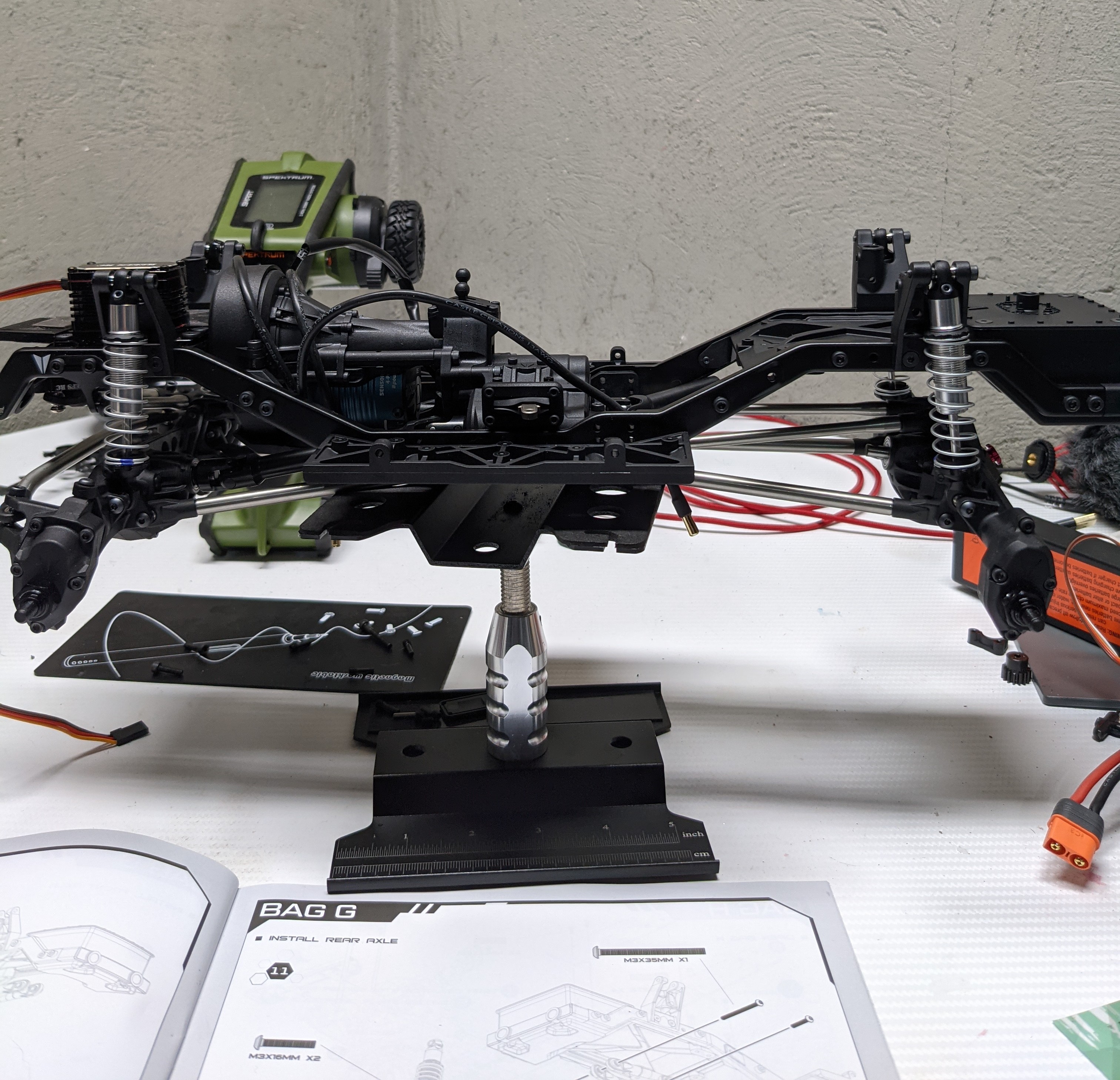 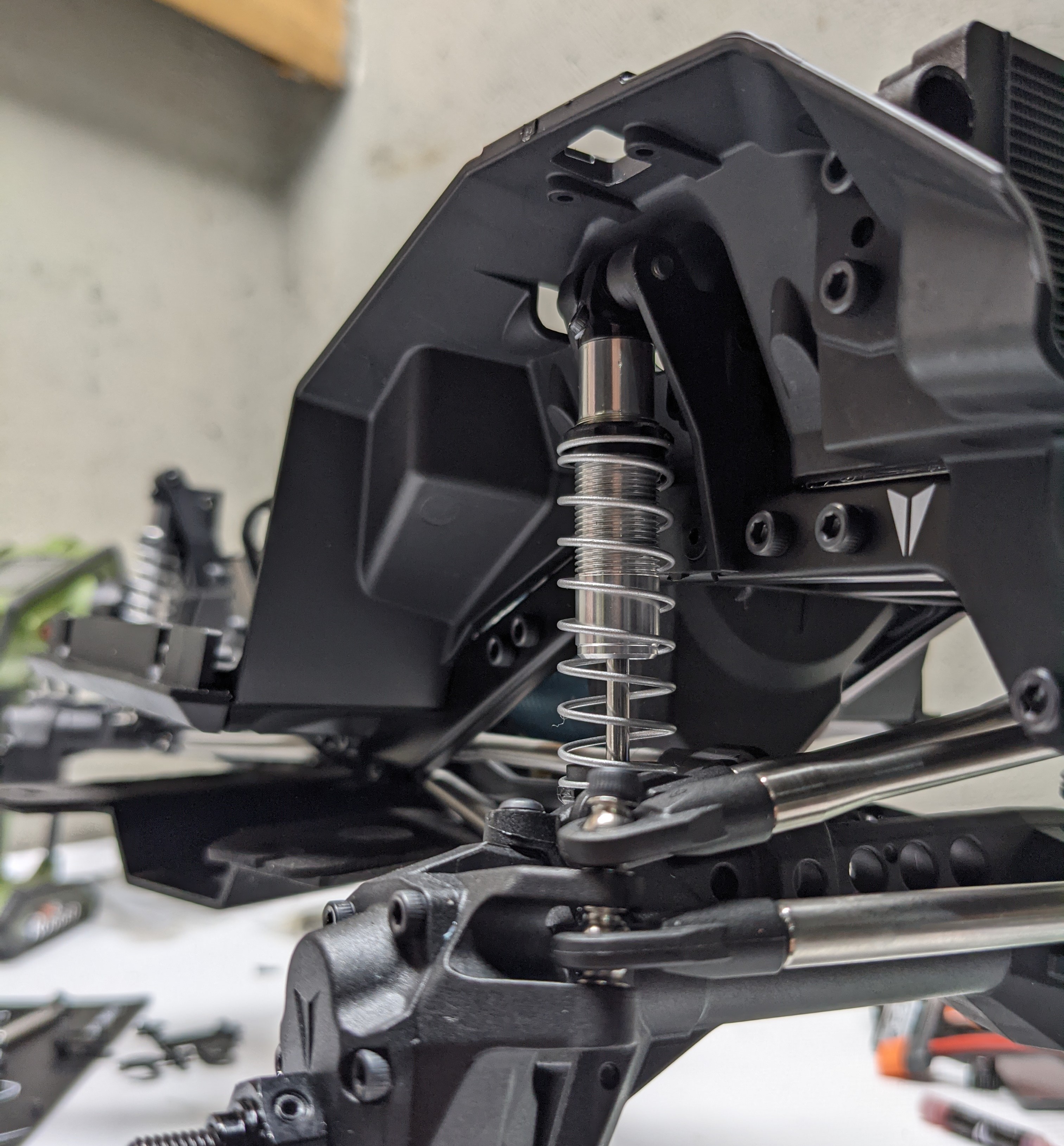 And finally the servos... (More about this later) 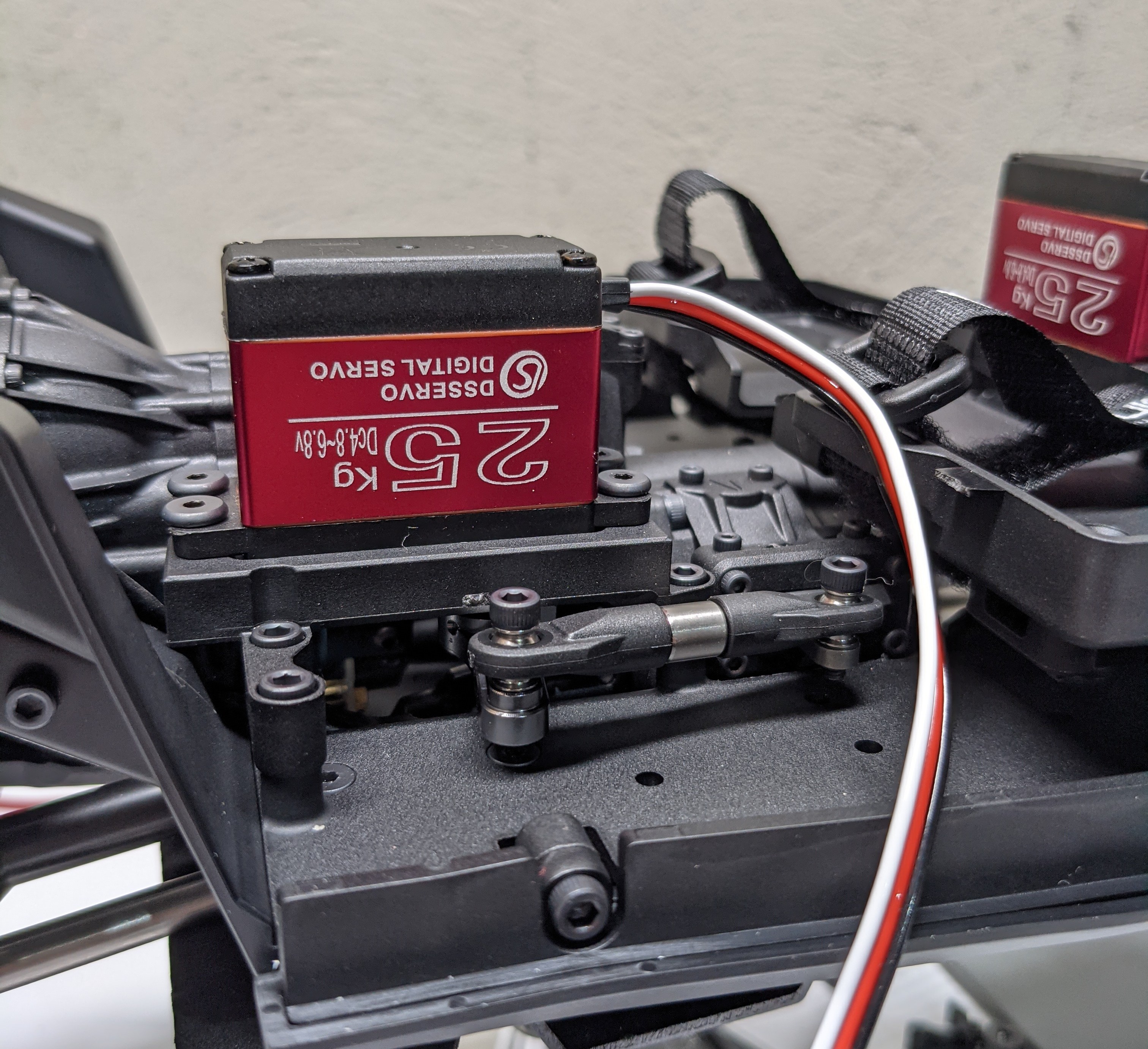 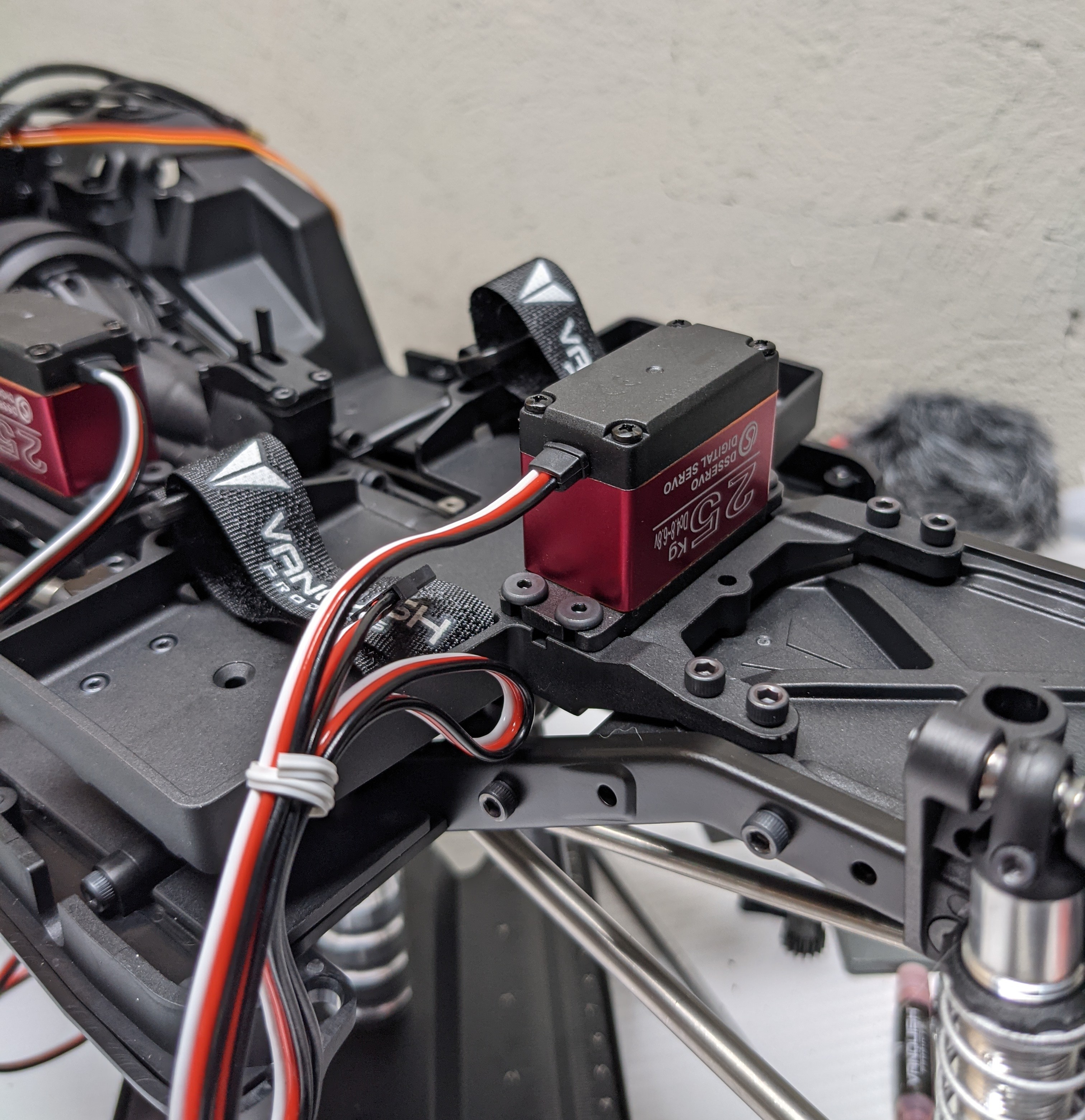 AND ITS DONE! All in all I'm super stoked with the chassis so far. ESC tucks in nicely on that plate.

I was riding high, so happy, then I went to set up the OD and Dig servos. And then I wasn't.

I don't know what I did, or if it was just the cheap Amazon servos, but then it just started smoking. Went into the Castle software, wasn't the voltage settings. Oh well, looks like it's time for some new servos.
Last edited: Oct 31, 2021

Well. Hopefully my Amazon servos don't do that. Mine are a different brand and color, kind of yellowish orange.

TexasSP said:
Well. Hopefully my Amazon servos don't do that. Mine are a different brand and color, kind of yellowish orange.
Click to expand...

As I understand it, the trick is to set the end points of the servo range [on your transmitter] so that you're not over stretching them - ie. set the end point to be just enough to move the rod into the correct position to select the gear, but no further... in other words adjust the end point trim so there is no backlash [from the transmission itself] transferred to the servo.
Last edited: Oct 31, 2021
C

those are some sexy axles...
K

After seeing a set of Rockwell's on Matt's rig I just knew that was the wheel I wanted. But then I got to looking around Amain and found something new (to me at least)

I didn't know that Hyrax came in a Class 1 variant. So in the cart they went with some CI foams. 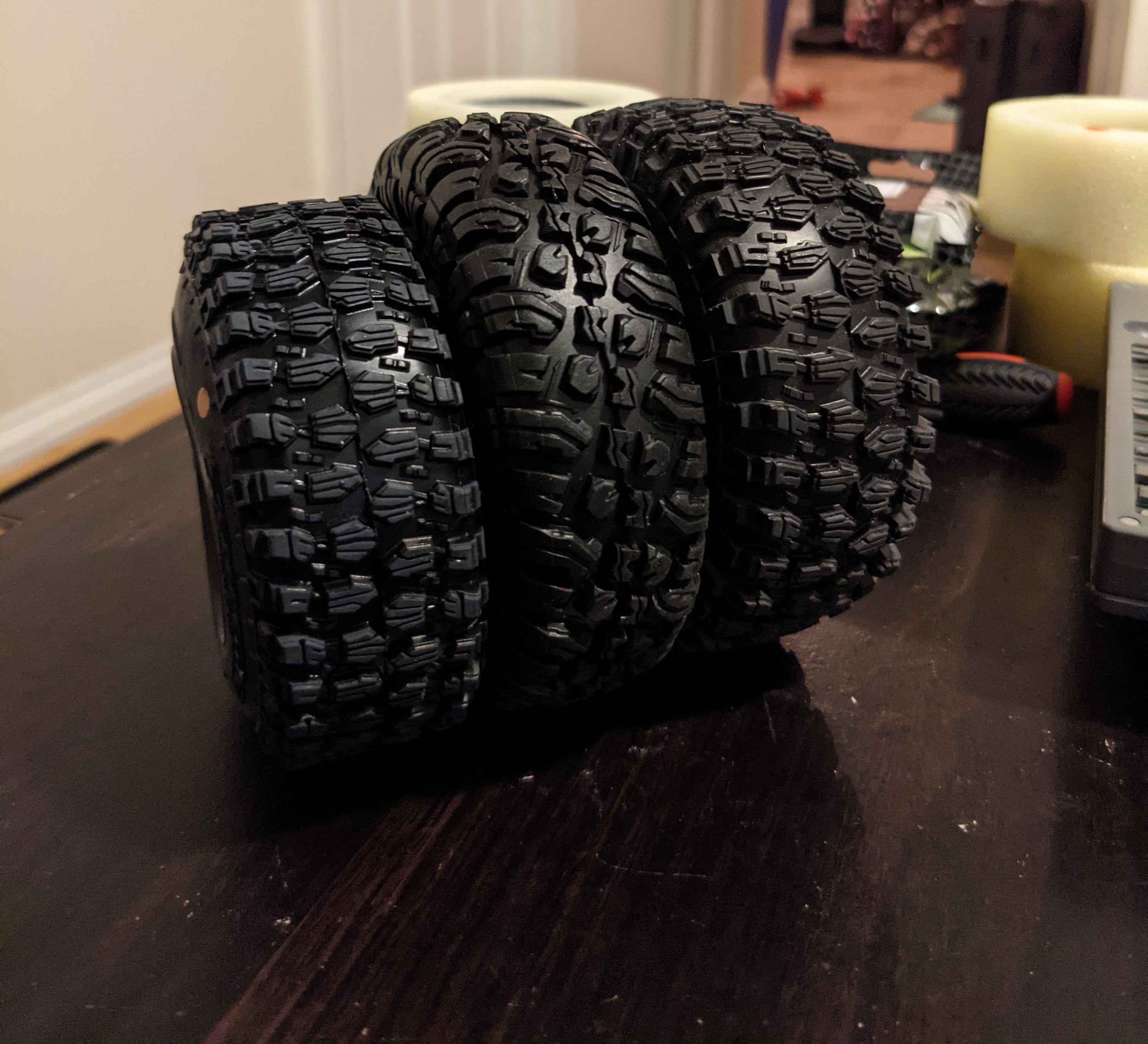 Got them all mounted up! Decided on soft foams for the front and medium for the rear. 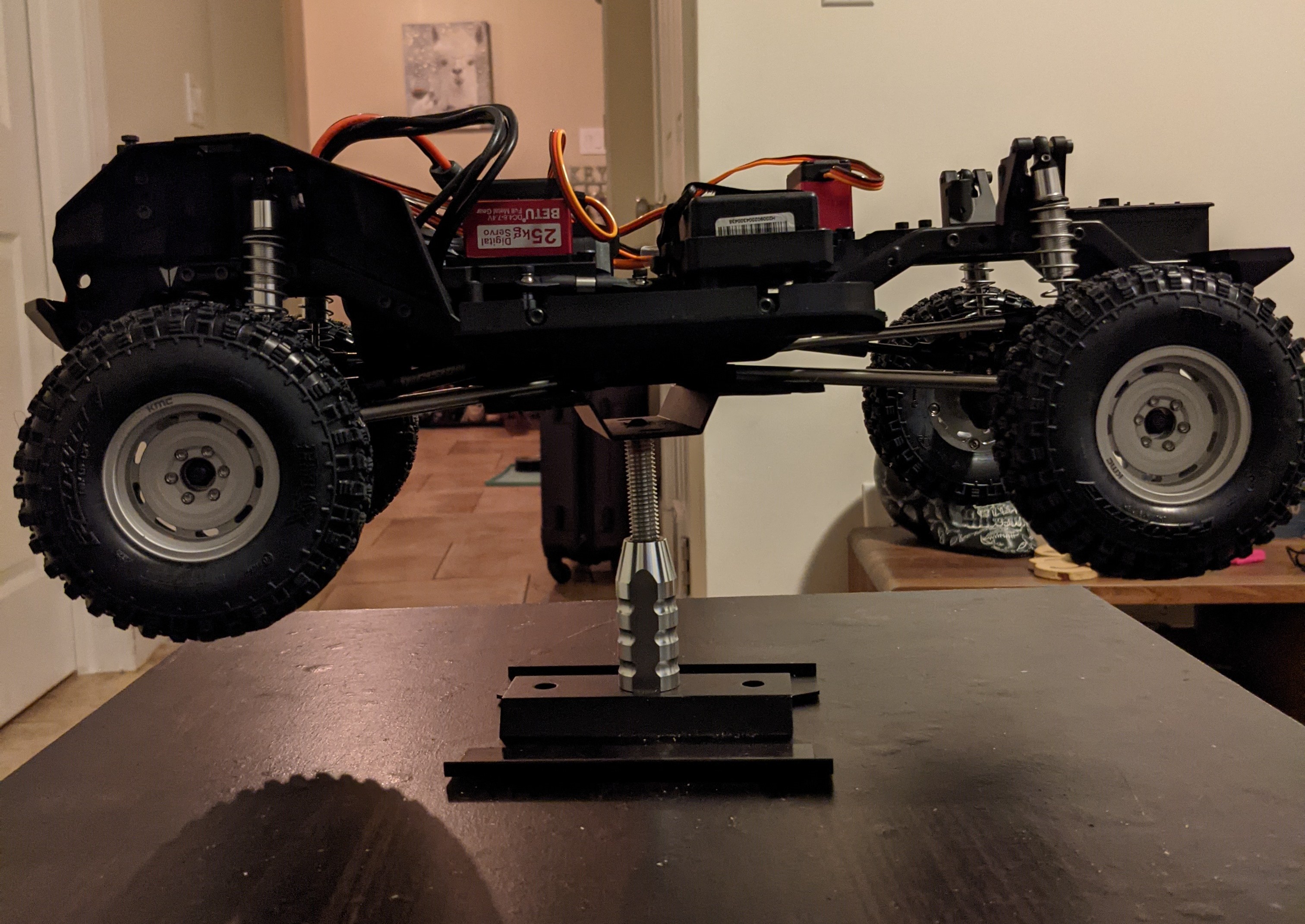 I am still not sure if I'm going to transfer these to my other build and put the standards on this. But that will depend on how it looks with the body.

Speaking of body, this is how you do it right? Just plop it on there? 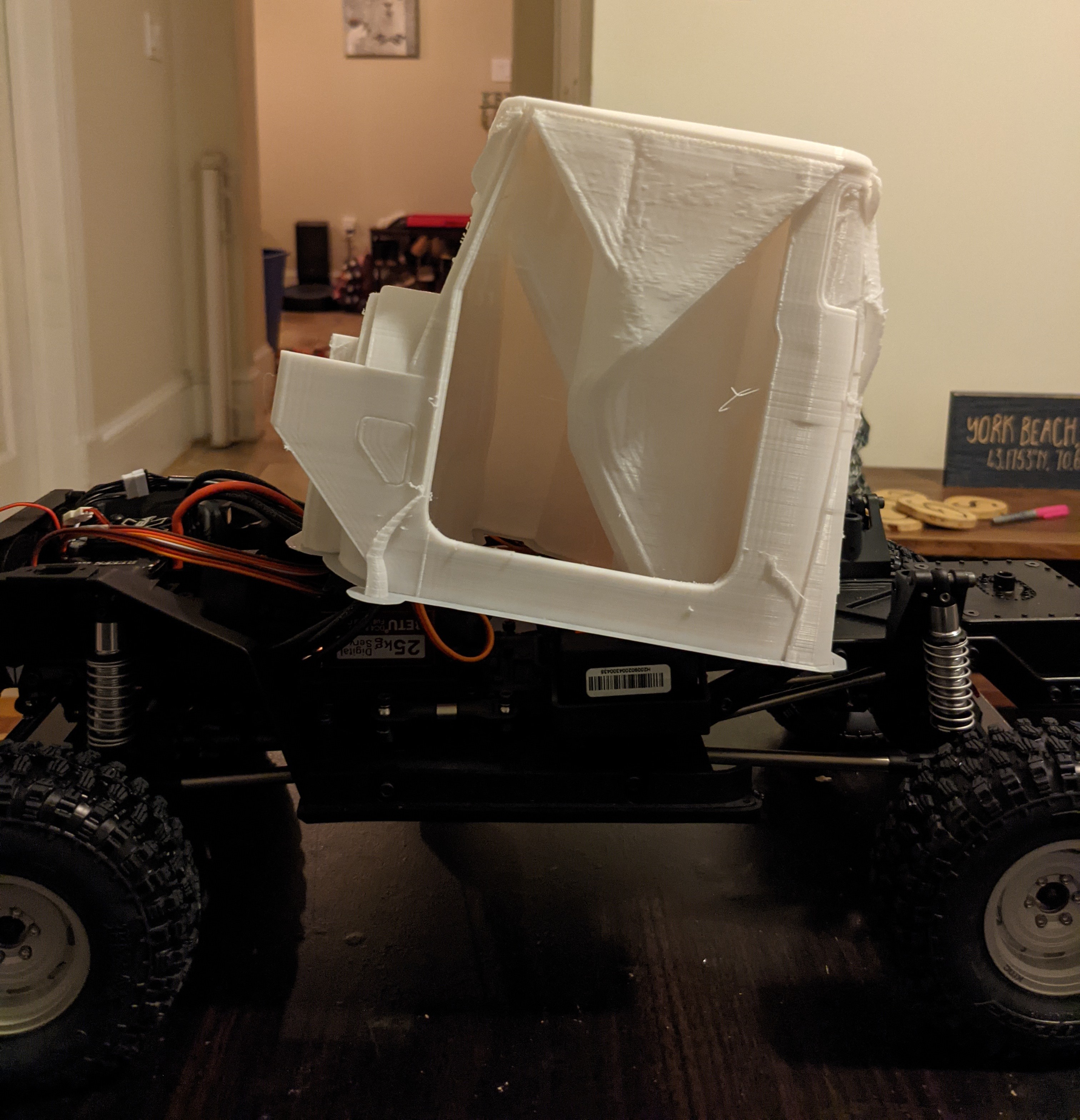 This is fresh off the printer after about 90 hours of printing.

That's all for now!
K

Part ???: Measure none, Print how many times? Aka. mistakes were made.

Well some more of the pieces finished up printing this morning. I took it upon myself to secure the hood. 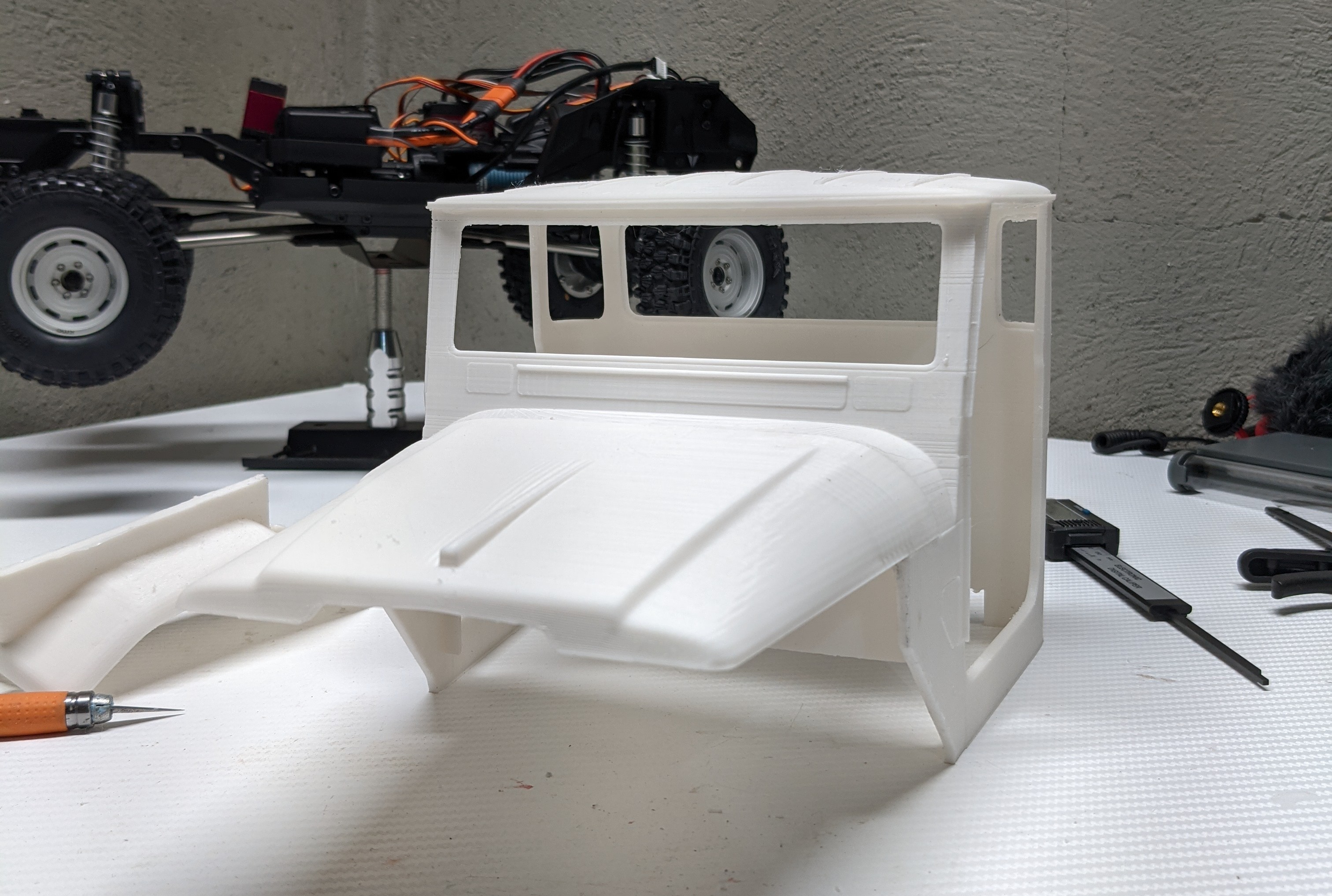 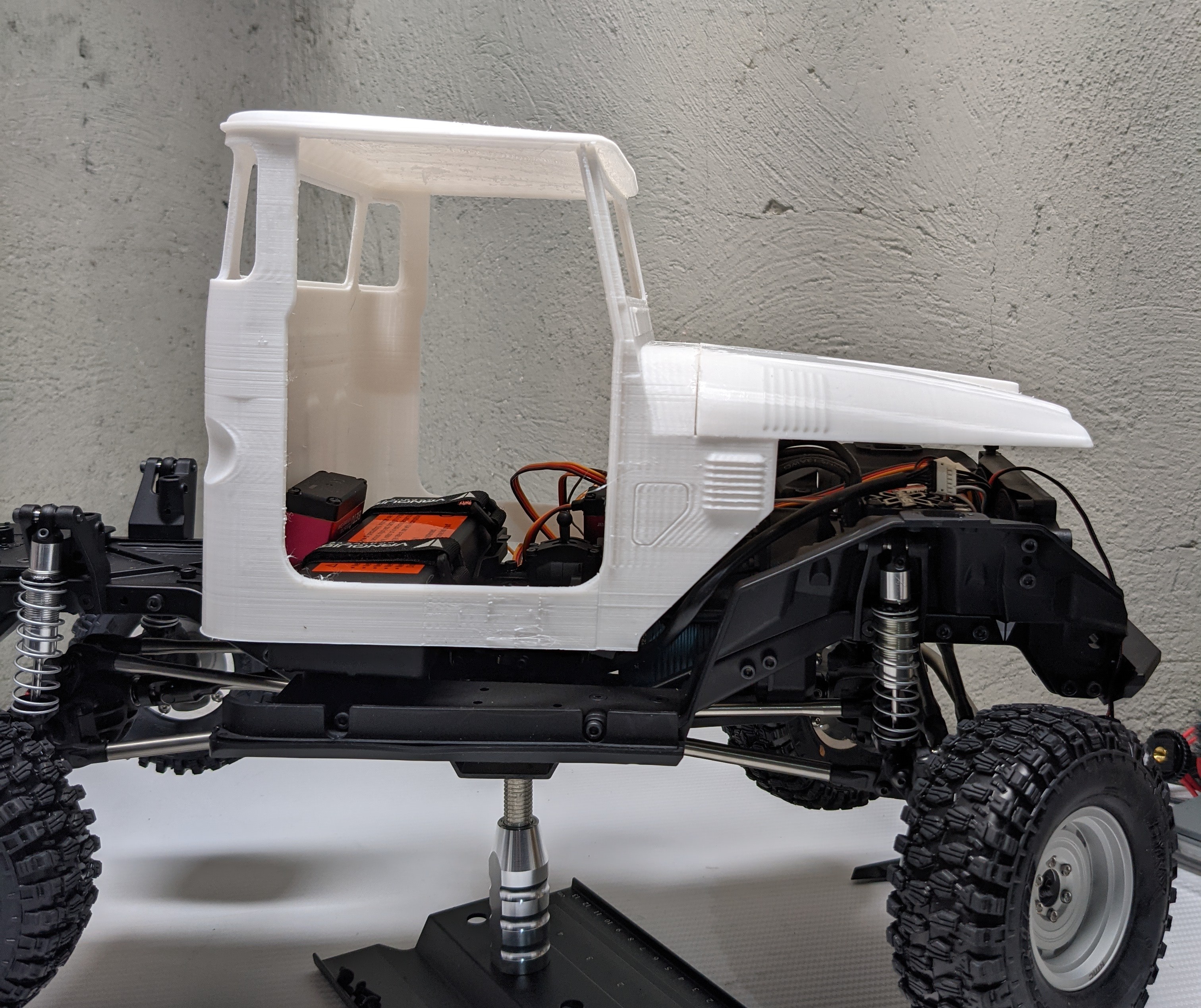 I'm starting to understand some of design elements Vanquish took with the lexan. The model I used needs some scaling, so back to the printer I go.

Since this body is going in the bin, decided to do some trimming. 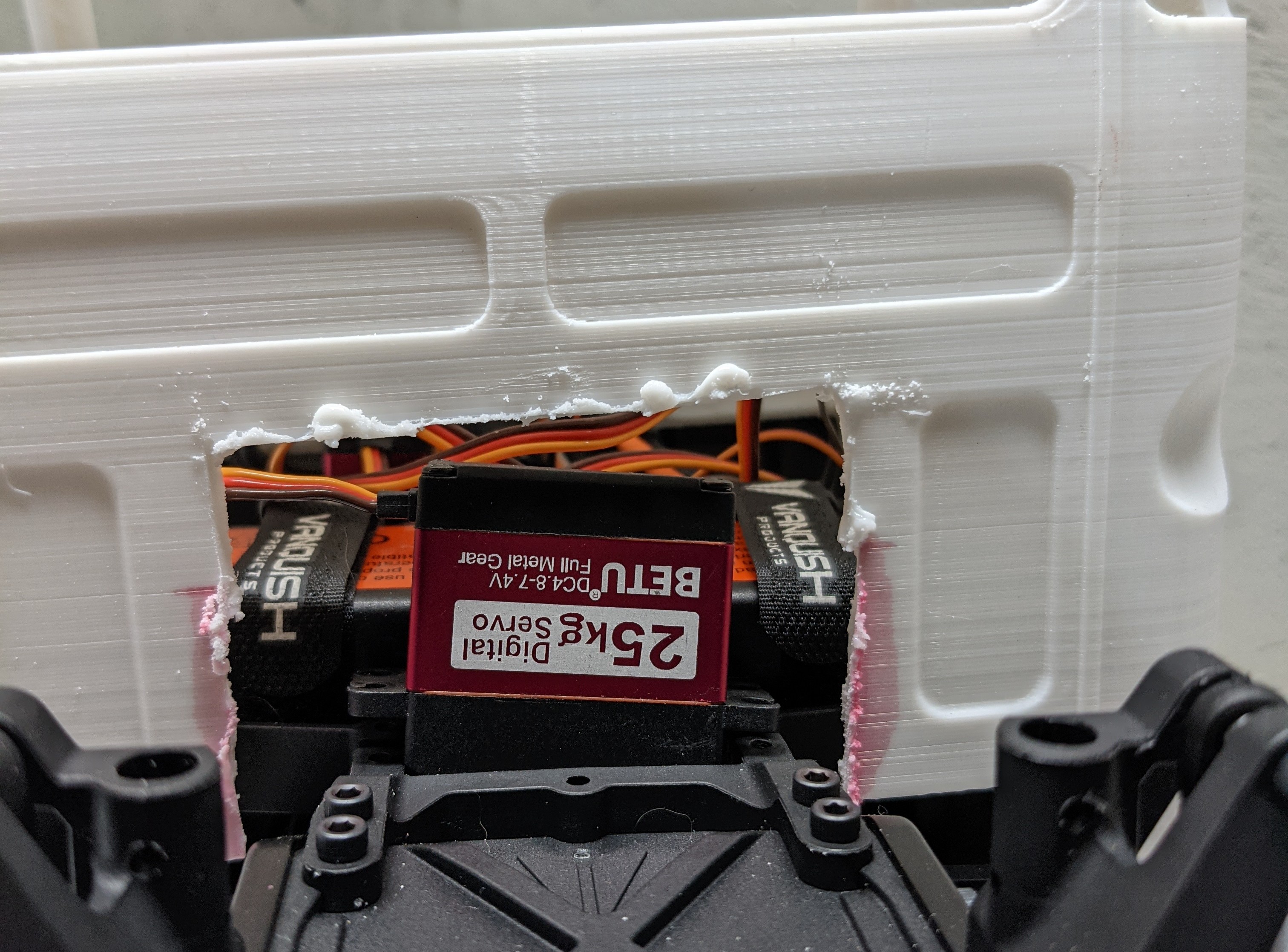 Its been awhile everyone, so lets see where we stand.

To no fault of Vanquish, the Phoenix has some weird proportions which makes it difficult when you're looking an most of the bodies (and STL files for those bodies. I was stuck, nothing seemed to want to fit right, the only thing that seemed to work was a Power Wagon model and lets be frank, that's been done 1000 times. I played around with a lot of models, I found that most were too short in the hood area, which meant I had to cut the file and scale other parts along the Y (length) which never looked good.

Then one night inspiration struck, actually it was served to my by our google overlords algorithm. I had been doing a lot of research on Toyota's but found that most of the Toyotas had already been done, or been ripped off already. So one night this video came across my feed, and I was instantly like "yes, that's what I need to do".

Now could I have gone for something like this? Sure but I wanted to take this on like it was a full sized rig.

Today was a slow day at work so I had lots of time to mess around in Meshmixer.

Ended up going with this model has it had an incredible level of detail and work put into it (just for me to chop it up). Now its not the single headlight version which I think I can live with. So I got to work modeling; 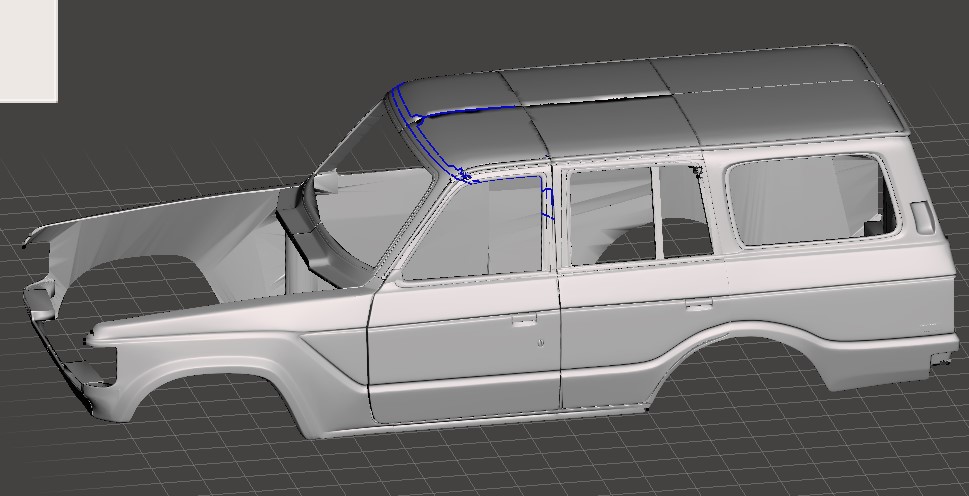 Here's the full model, of which I will only be using roughly 40% of. Luckily the way the designer set up this model they separated the body into 3 sections, which makes my job so much easier. 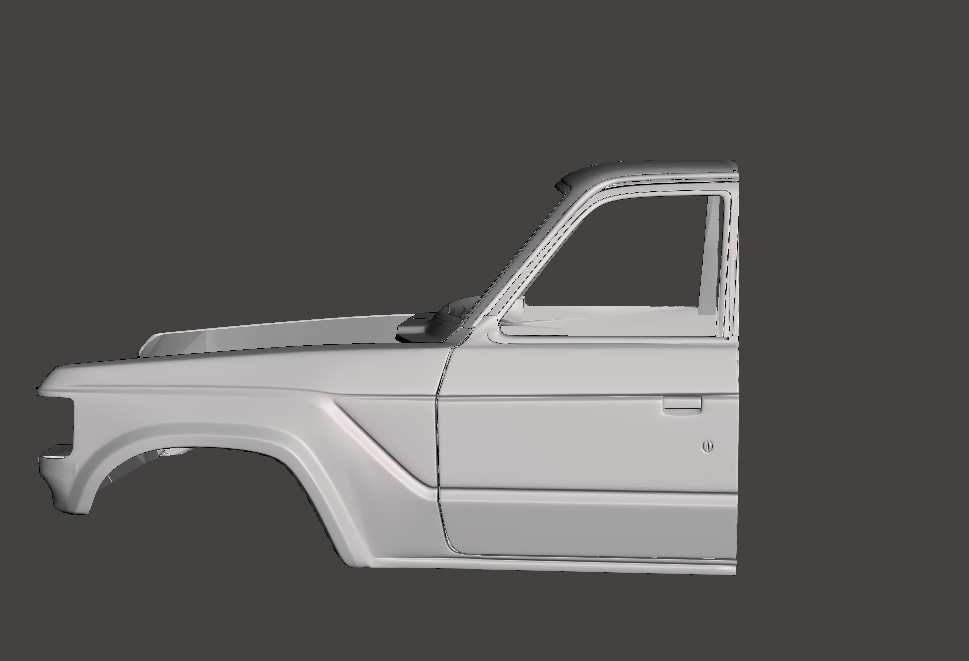 Look at that! I can already see it coming together. Now I am not savvy enough to design up the back half, but I already had the files from the other single cab design I linked earlier, and what do you know, it matches up decently. With the back half taken care of I decided to take some different approaches with the designs.

I decided to give just the standard single cab look a go. Not terrible for absolutely no idea what I am doing, but I still wasn't the biggest fan. 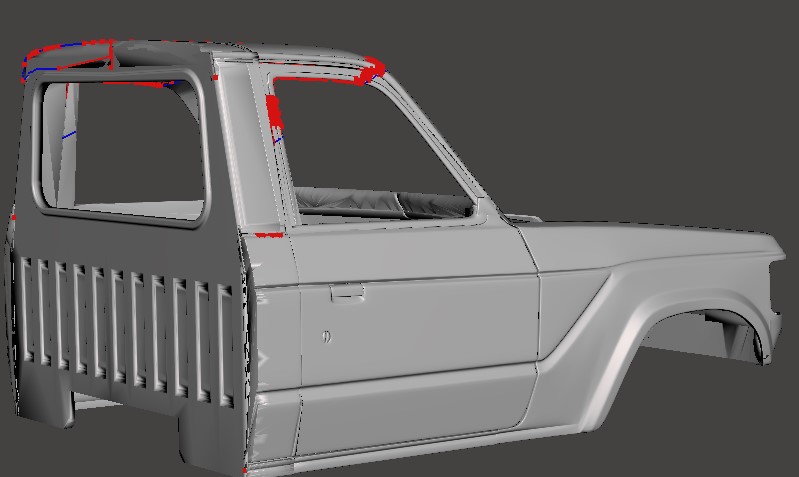 Let's try something different; some of the reference pictures I found online of 60 Series UTE's had a rear window in them. Almost like the glass in a standard Toyota Access Cab. Now this design is a step in the right direction but still seemed off to me. I am aware that there are some parts not lining up, this was a rough mock-up. 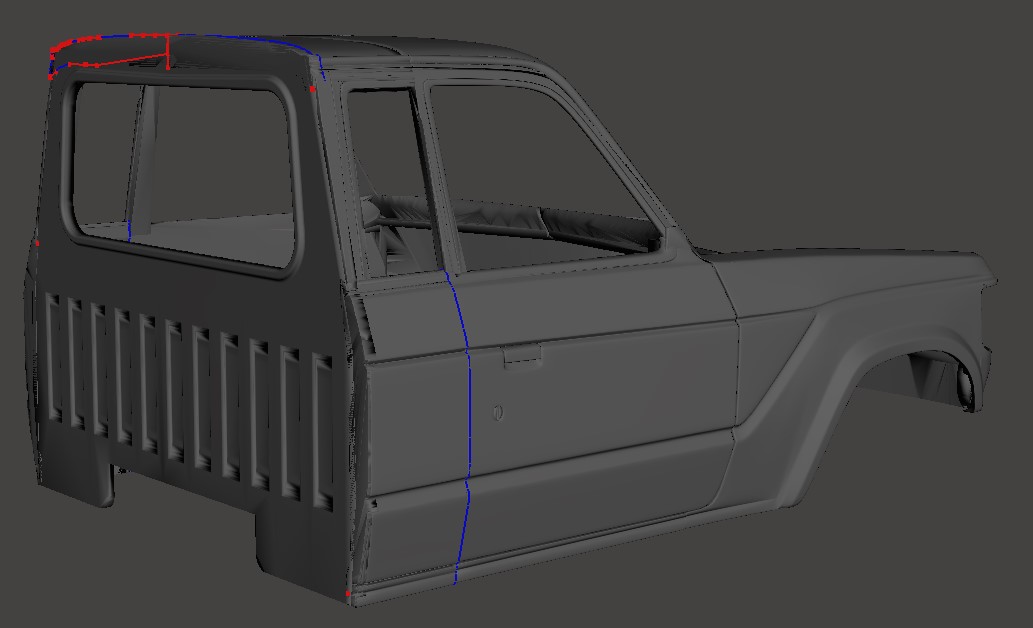 Finally we have the design I settled on after tinkering so long with the model. Now what I did is a cut right at the front of the mid section (basically where the rear and front door seams meet). I then took that section and rotated it 180 degrees, I also decreased the amount of "window". Meshed it all together and got; 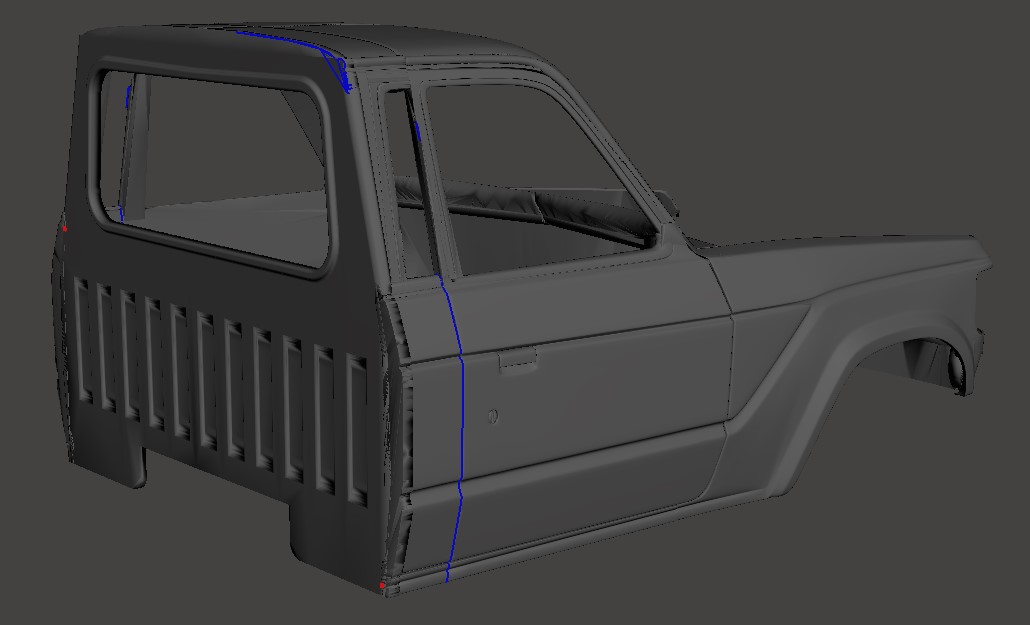 With all that being done, time to mess with the scaling and throw it on the printer at my fastest and largest layer height. See you guys after 48 hours of printing.

60 Series ute, bring it on mate, that is an excellent idea.

I've seen a few 1:1 "dual cab" ute conversions (four door cab) as well as some "extra cab" style builds like the one you are leaning towards.
I also really prefer the extra cab style, I reckon it's proportions are just more pleasing.

Still waiting on the other scaled down (to 95%) body to print up, I'm really trying to nail down the dimensions. But since PLA is cheap and I can basically leave the printer on autopilot I printed the bone stock dimensions of the files. 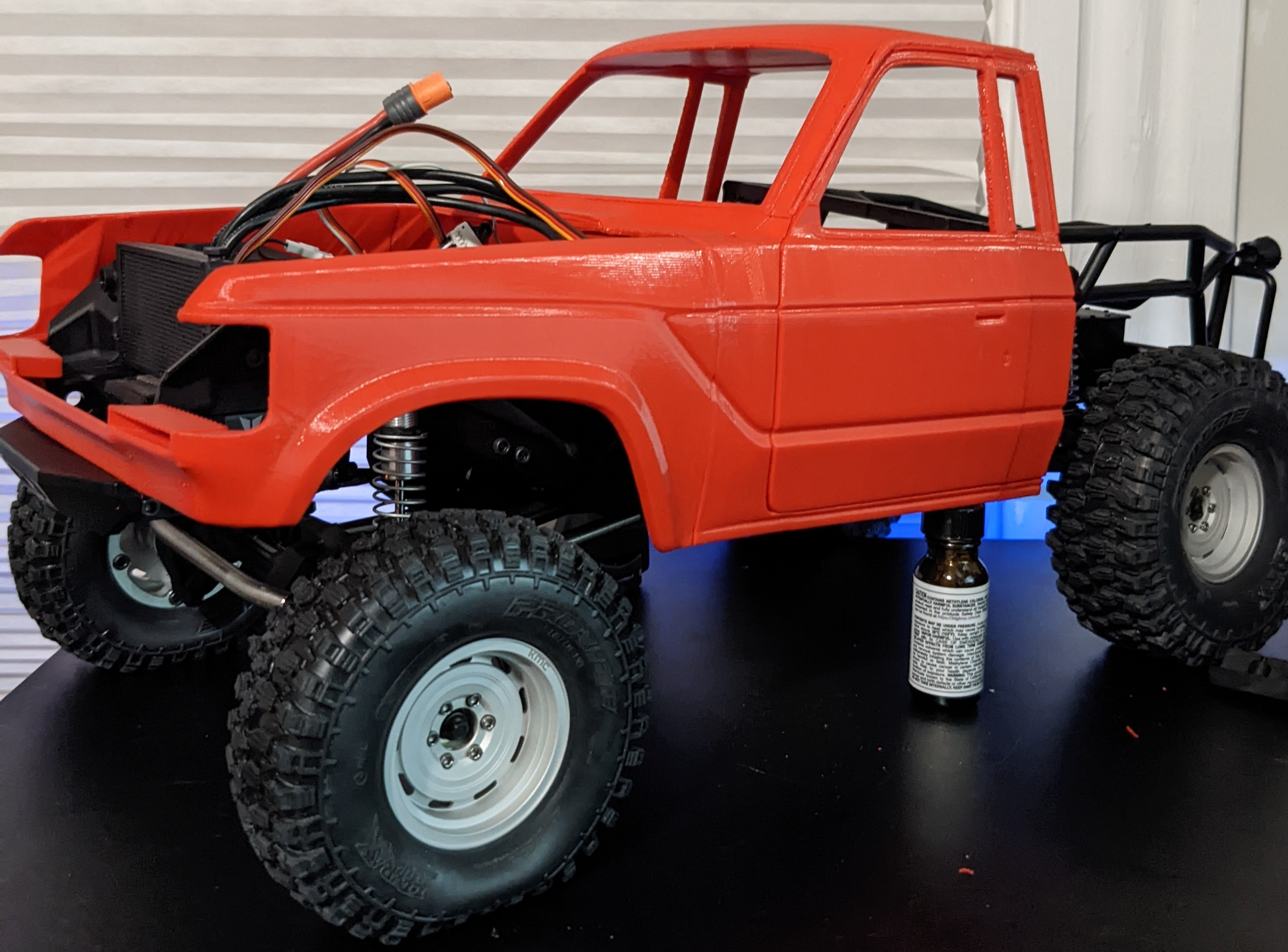 I am really conflicted with this body. It looks good but I don't necessarily like how class 1 tires look and since this isn't going into a class, I would rather have the added benefits of a full sized tire.

But at these dimensions the rear of the tire barely touches the fender when turned. The full sized Hyrax's are decently tall so I'm exploring some other options for tires.

So here are my next two(ish) options;

Scale down to 95%, but as you can see that only narrows the front which only magnifies the wheel issue when turning. 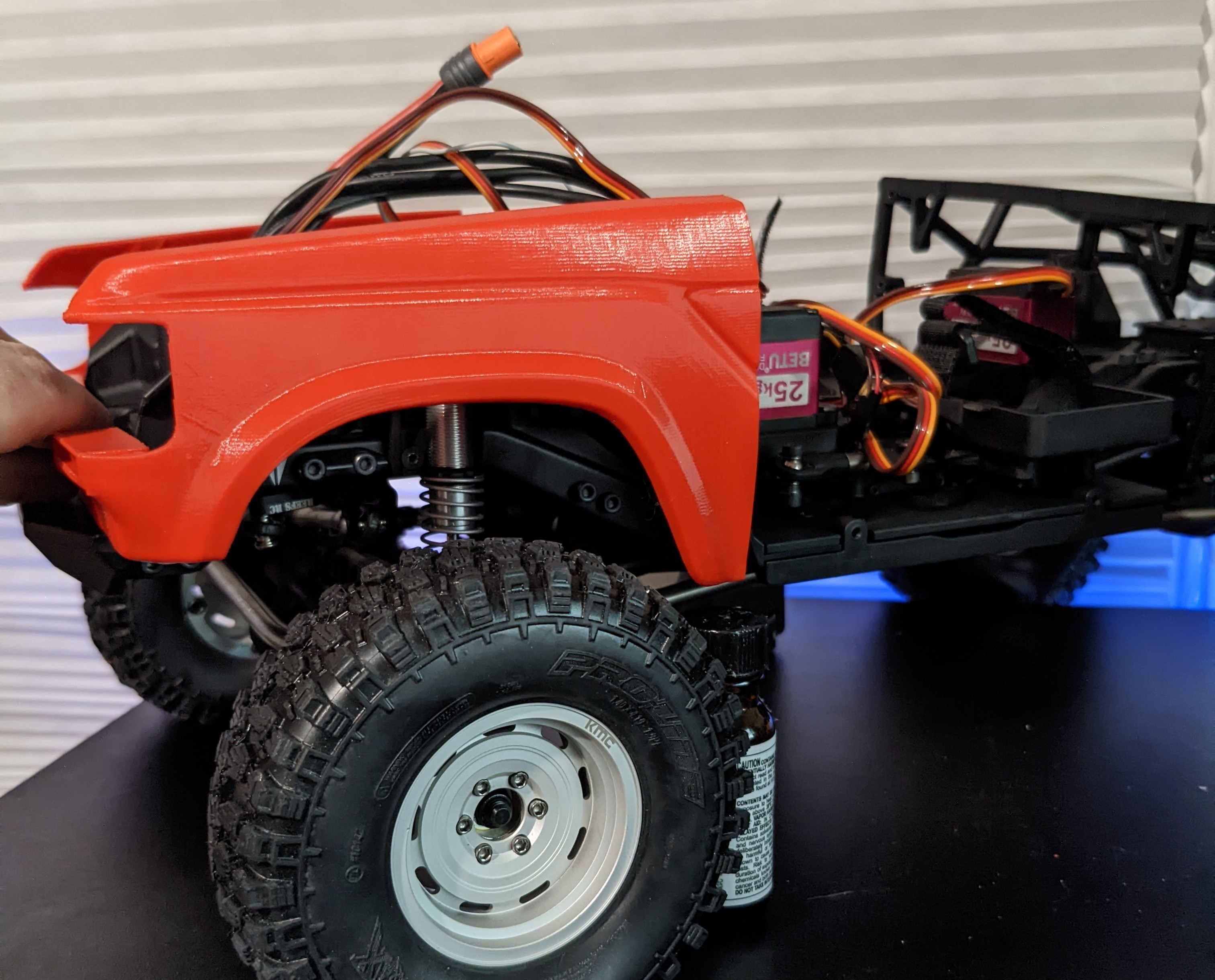 Scale the body up further to cover the tires. This is the least desirable and introduces a whole host of other issues.

Grab some slightly smaller full sized tires like some of the Pitbull options or PL Krawlers. The PB's are slightly shorter with the Krawlers being the same height but narrower.

Mess around with spacers. Obviously I can get some obnoxiously large spacer to clear the fenders. Or I could sink the wheels in more with the smallest vanquish hub.

This is where I ask you more experienced builders as I'm having a heck of a time figuring out how to approach this.
E

Well, I'm not the "more experienced builders" you were hoping for, but I'll share one other option to consider anyway. You could trim the fenders somewhat (potentially in conjunction with added fender flares, or not.)

Of course, if you were going for 100% scale accurate class 0 or class 1 build, you might not want to hack up the body... but the reality is that these big tires would be huge in real life, and if a 1:1 rig had equivalently scaled tires on it, it would most likely have cut and/or flared fenders.

I'm certainly not claiming it's the best approach, just another option to consider. It mostly depends on what look you want. I suppose it impacts performance too - more fender cut allows lower ride-height, lower CG, and therefore better balance for any given tire size.
K

ebeowulf17 said:
Well, I'm not the "more experienced builders" you were hoping for, but I'll share one other option to consider anyway. You could trim the fenders somewhat (potentially in conjunction with added fender flares, or not.)

Of course, if you were going for 100% scale accurate class 0 or class 1 build, you might not want to hack up the body... but the reality is that these big tires would be huge in real life, and if a 1:1 rig had equivalently scaled tires on it, it would most likely have cut and/or flared fenders.

I'm certainly not claiming it's the best approach, just another option to consider. It mostly depends on what look you want. I suppose it impacts performance too - more fender cut allows lower ride-height, lower CG, and therefore better balance for any given tire size.
Click to expand...

This is certainly an option and not something I am opposed to.

I was finally able to get the ride height set and on the stock dimensions of the body and full sized hyrax's there's less contact than I thought so I ordered up a set of the #3 & #2 incision hubs. I believe with the #2 hubs it will bring ~10mm less track width. I pushed the body so the flairs hit dead center of tire and it was ~11mm.