Hey y'all, new to this forum, and back to RC 4x4s after a ~15yr hiatus. My only RCs at this time are a couple SCX24s, but I've certainly gone all in at this point..

My lil truck started life as a familiar teal Chevy truck, and has gone through many standard changes for this platform. All the standard bolt on brass, wheels/tires, a pile of cheap servos and motors, a half-interior in the stock shell, front and rear lighting, and some styrene accessories, etc. It's felt like a slippery slope, chasing reliability issues ever since the first upgrades. Bent axles, smoked motors and servos, seized bearings, blown transmission gears, broken wires, etc etc.. But finally, with big bucks come big results, I'm rolling on a Furitek/Surpass motor setup with a 17t pinion, and a Reefs servo, this truck drives about as good as I imagine it could get. My goal is a solid "trail truck", not necessarily a dedicated crawler, hence the large pinion. With this setup, I can keep pace with a stock truck, but still have plenty of low end control. The extra wheel speed is also nice for brapping over obstacles. 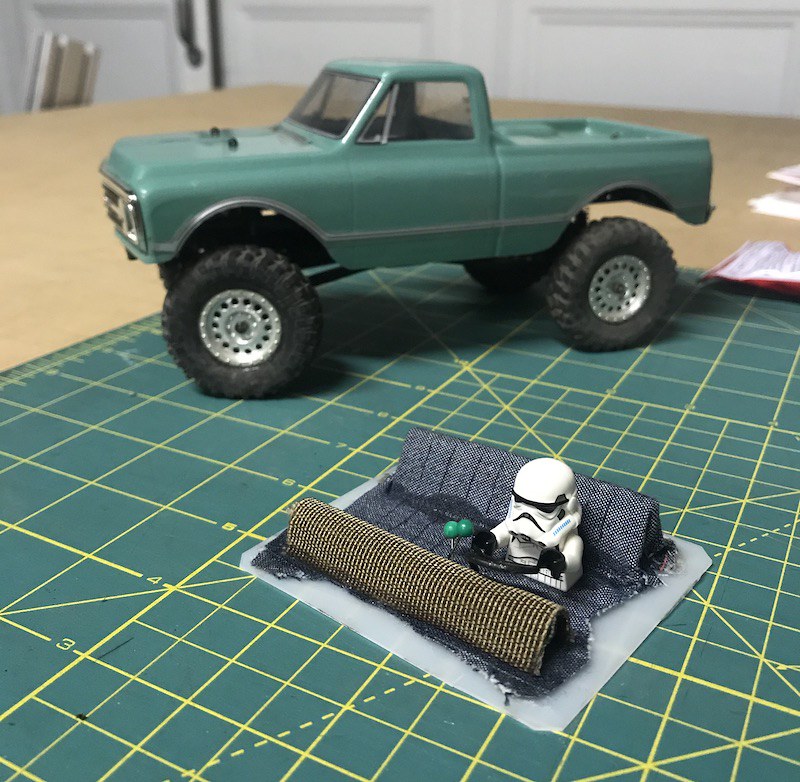 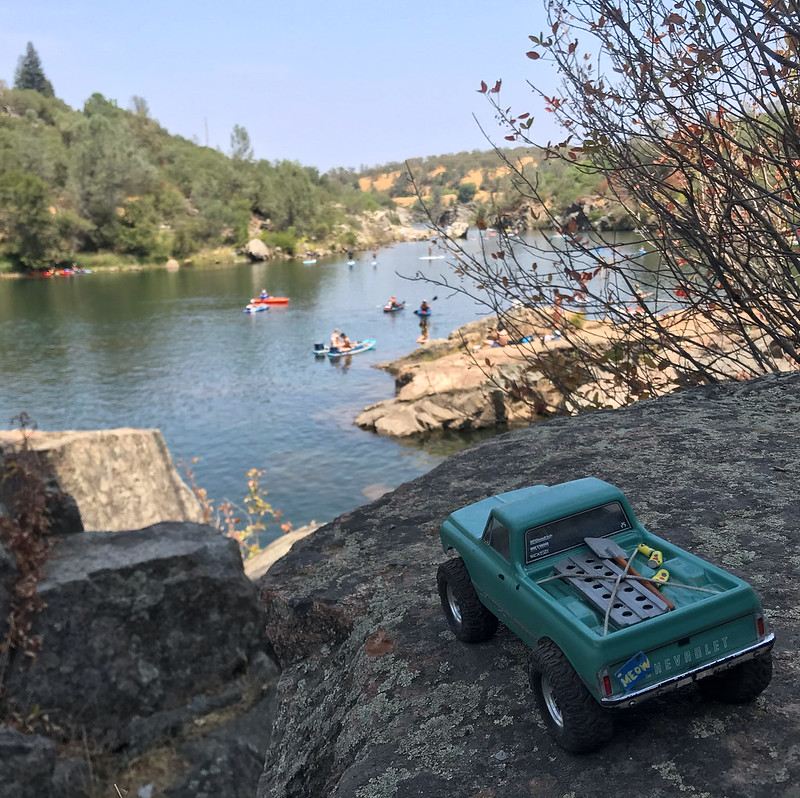 Couple a empties, and some other styrene junk in the bed. 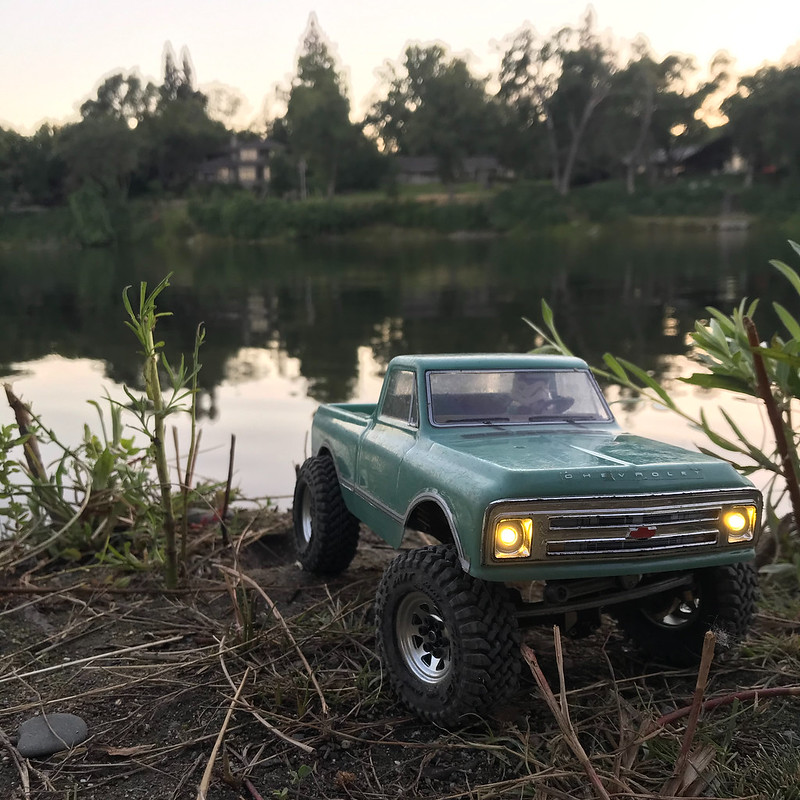 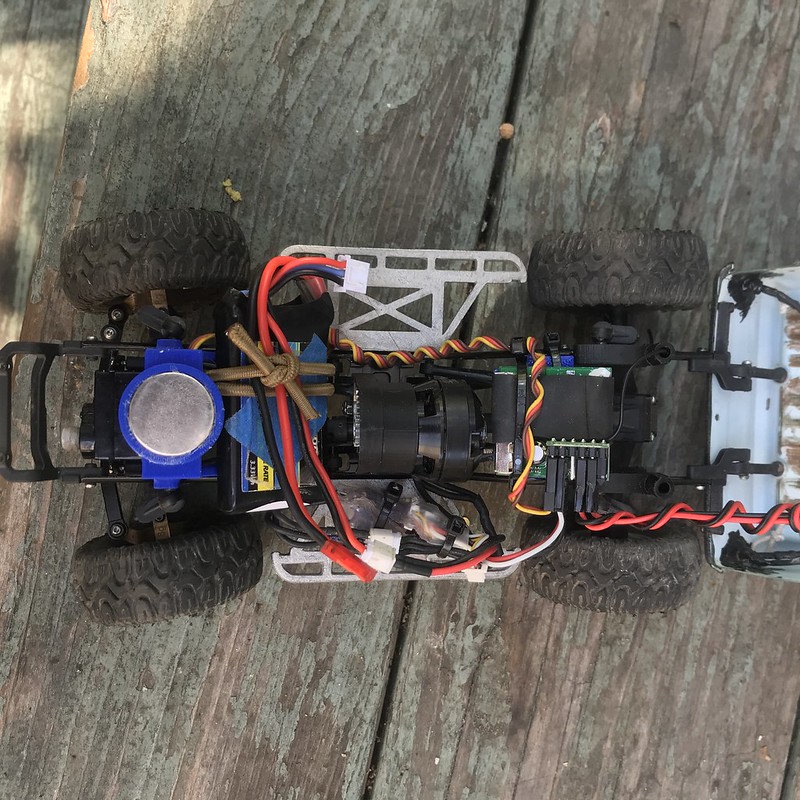 Here's a chassis shot of where it's at now. Front mounted battery and "back door" Surpass mount. Stock RX, de-cased and treated with conformal coating, as is the Furitek Lizard ESC. I've switched the shock-cord for flat elastic, but otherwise same battery setup and no complaints so far. I also really like these printed sliders from Thingiverse. They really help the truck bounce and slide over obstacles, plus it gives more room to mount electronics n such.

Good call on the Stormtrooper, you'll never hit anything.
C

Now that the chassis is sorted, it's time to get into the aesthetics. I recently picked up a Suzuki Samurai shell from Iceberg RC. I had found them on the Instagrams, they offer several styles of molded polycarbonate shells, specifically intended for SCX24 trucks. Being that they are polycarbonate, the details are somewhat limited, and the shapes tend to be boxy, but I think they work well for the scale and models offered. For the price, low weight, and my use as a basher, it seemed like a good choice. Besides, always happy to support a cottage maker (note my canvas sewing shop in the background).

The shells are molded from 0.3mm polycarbonate, so not as thick as the stock Axial shell, which I measured at a little over 0.4mm. The shell shipped from the UK, and included window mask templates(cut them from masking tape) and grille/light decals. The decals appear to be inkjet printed on contact paper, leaving something to be desired.. No worries, my new 3d printer will address that. 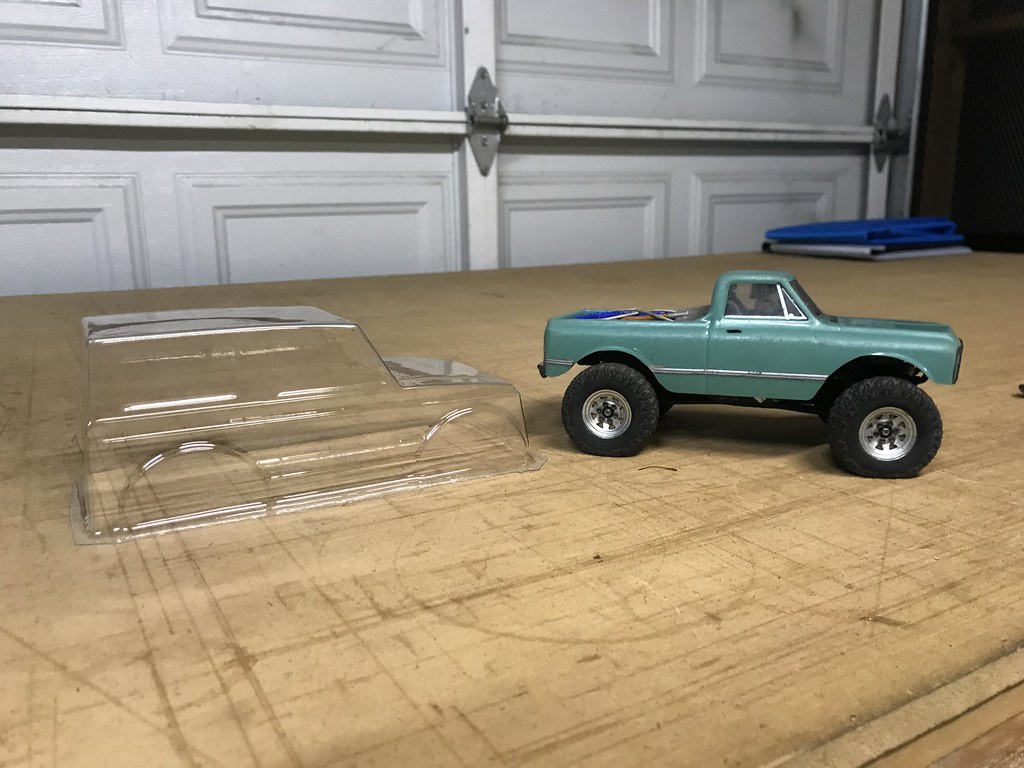 The unboxing. Just your usual vacuum molded polycarbonate piece. The thinner sheet makes the body noticeably softer than many bodies I've held in the past.

I trimmed the shell and got to work prepping for paint. For this truck I wanted to go for a OEM+ type of build, so finding a stock-ish color was important. Not fully satisfied with my choices, I settled on Tamiya PS-35, blue-violet, backed with white. Not quite as purple as I might have wanted, but satisfactory for this job. 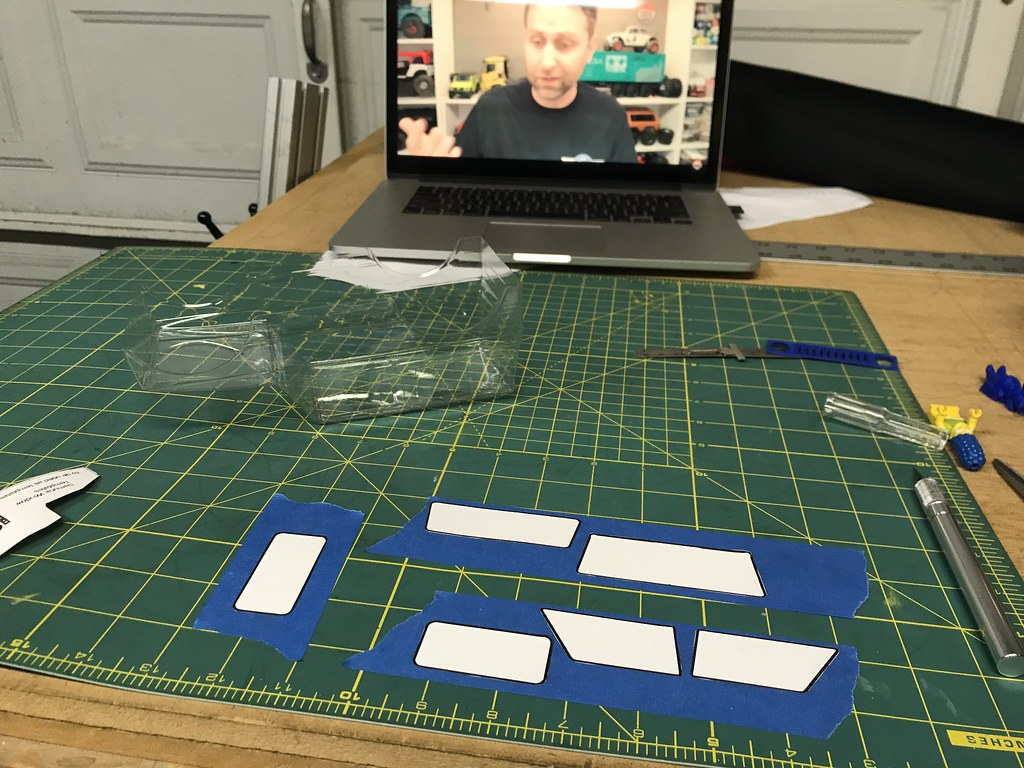 The window masks come printed on something like a shipping label, so I transfered them to masking tape and stuck em inside the clean shell. Proper entertainment in the background. 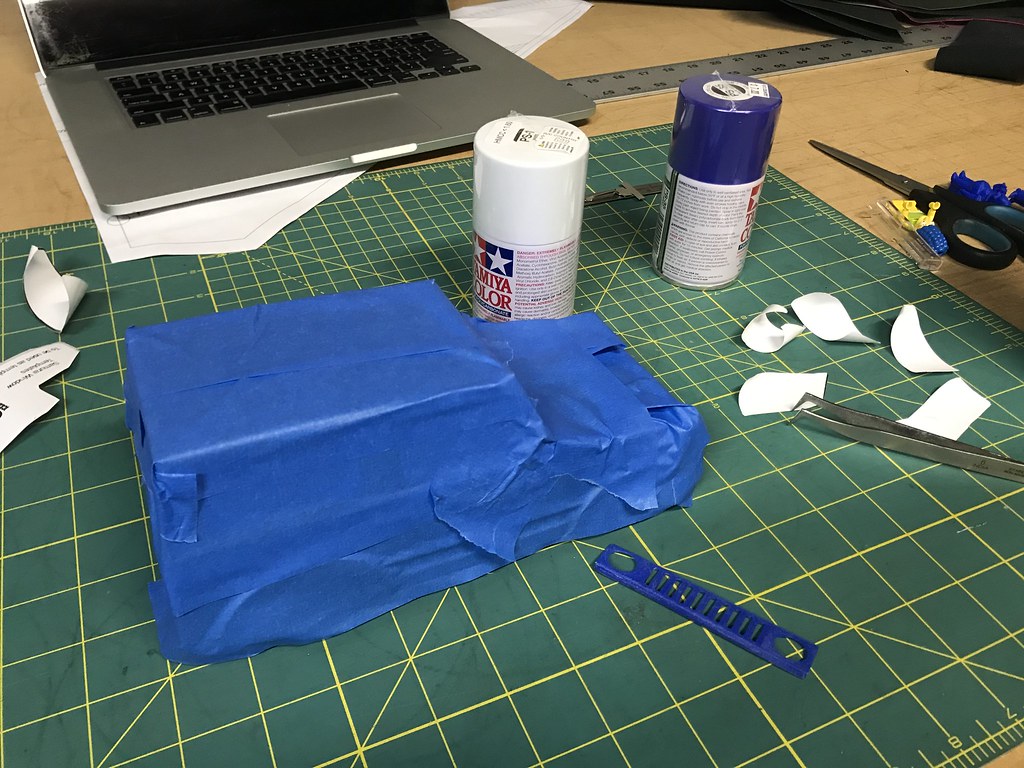 The shell does not include overspray film, so I also masked off the outside. My paints in the background, and an initial mock up of my grille insert. 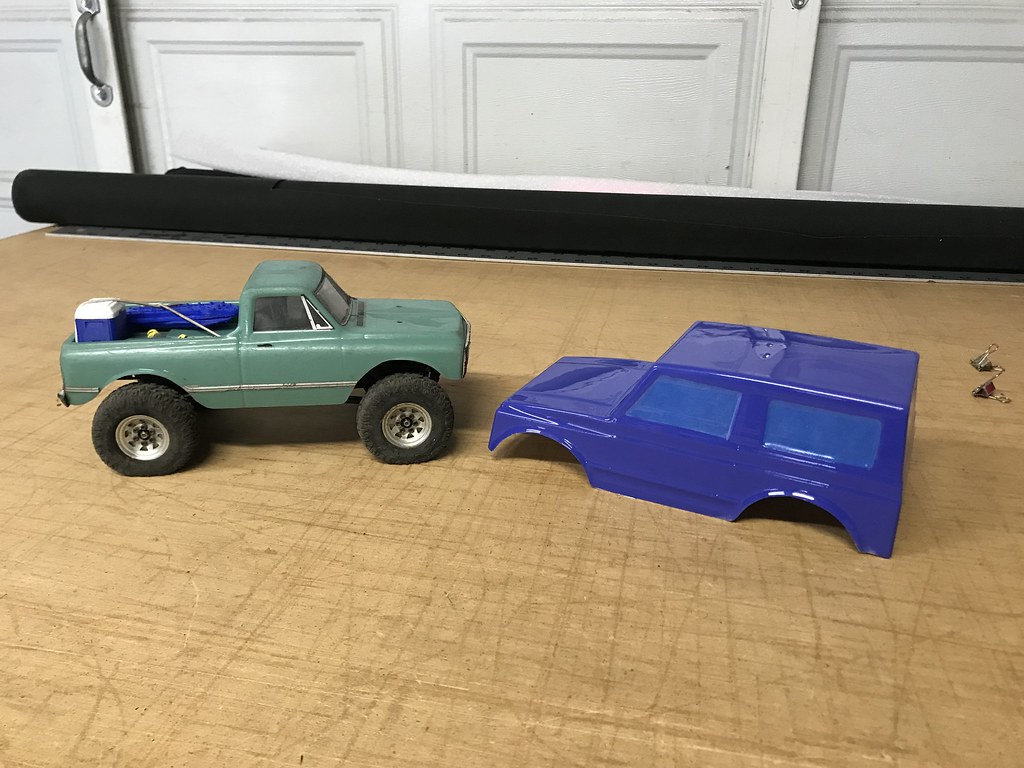 Unmasked the outside for an initial glimpse. Not as purple as I might have wanted, but it looks nice and fits the vehicle well. The Iceberg shell is also noticeably larger than the stock body, though it makes sense in order to match the wheelbase.
Last edited: Sep 11, 2021
C

While the paint is curing, I'm also working on a set of bumpers, a grille, dashboard, and some other bits and bobs that I'm pulling from a SJ-410 model kit on Thingiverse. See here for a beautiful example of a Sami/SJ-410 body: https://www.thingiverse.com/thing:2956295
I would love to print and build this whole thing, but my current printer is a MP Delta Mini, so approx 100mm diameter build capacity. Good enough for 1:18 scale parts, but not entire bodies or large panels.

Anyway, I'm modifying and working some of these pieces in Fusion 360, as well as basic scaling in Cura. As I mentioned, I'm going for the OEM+ build, so I'm using the stock square bumpers from the SJ-410 model and adapting them to a re-worked frame mount that I grabbed from Thingiverse. On a real stock Sami, the auxiliary lights mount in the bumpers, and that was the initial idea here.. 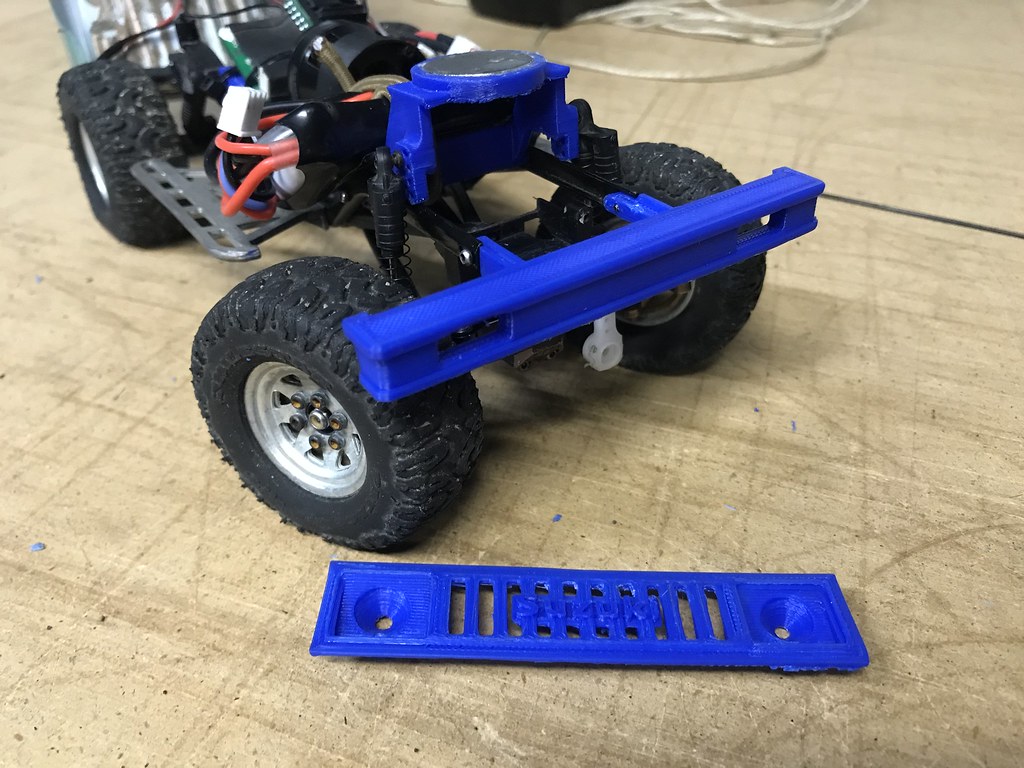 Stock boxy bumper, and re-worked non-US grille. I scaled it, added the logo, and made the headlight buckets. The idea is to insert this into the shell from the inside, through a cutout.

The bumpers proved to be terrible for performance, approach angle suffered too much to be drivable. Because of the perceived delicacy of the thin shell, I really want to have solid, chassis mounted bumpers that protect all the corners. So I'm starting with the first logical step for any home-brew 4wd enthusiast, cut the stock bumper! In this case, I did it in Fusion360... 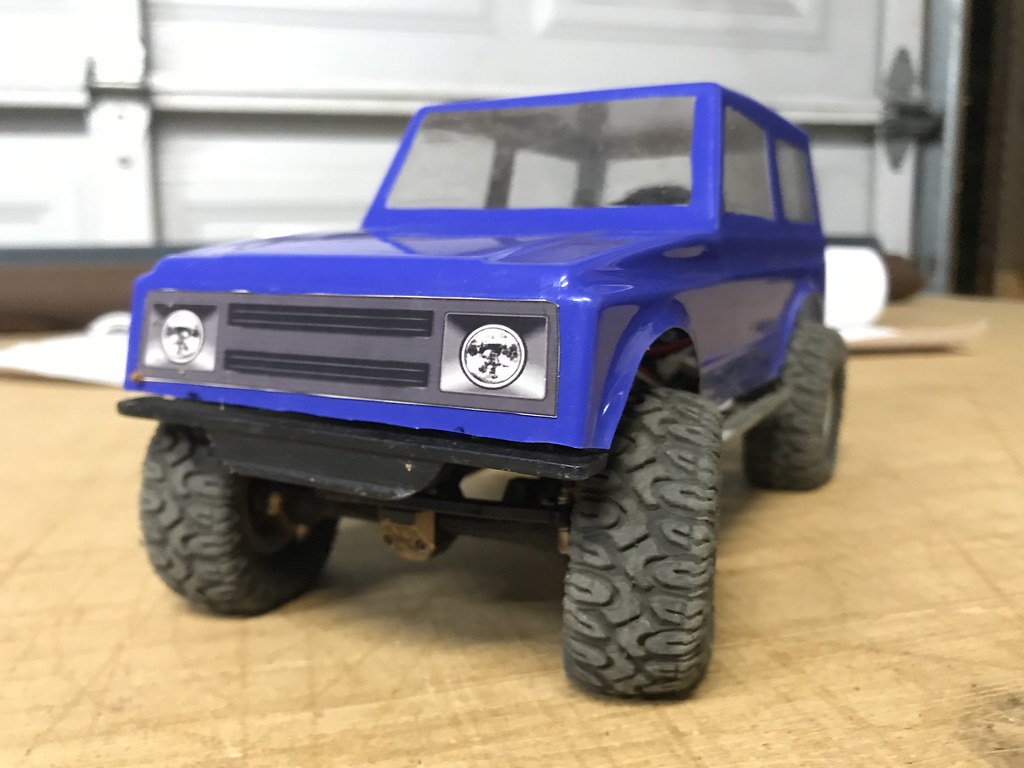 This is the current iteration, after dialing in the cut and stick-out to be just a few millimeters. I'm happy with the balance of performance vs stock aesthetics for now. I'm tempted to work on that square edge on the bottom, but more likely I'll make some type of tube bumper later. Also, peep the included grille decal. It's temporary. 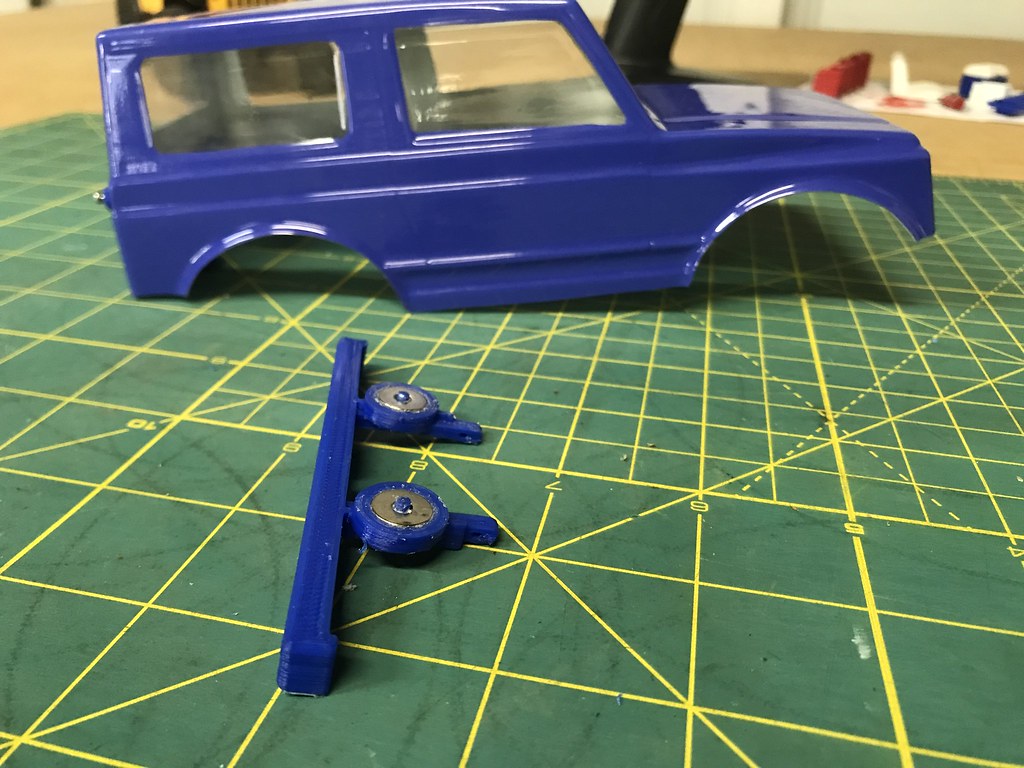 Similar story on the rear bumper, I've used the stock square bumpers from the SJ-410, and added some disk magnets for the body mount. The position is a little odd, but I figured it will keep the extra weight lower, and allow me to adapt to multiple bodies. 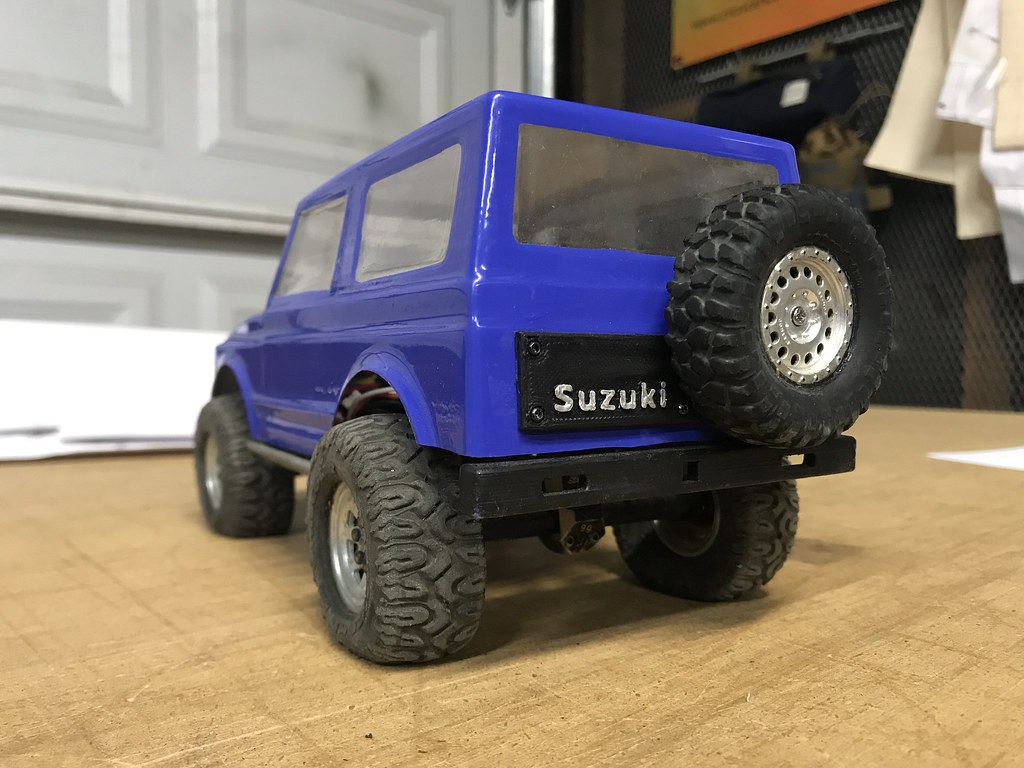 And the rear end painted and mounted. I modeled the rear panel/tire carrier myself, it uses 6 stock 1.4mm screws to catch a backing plate which locates to the magnet mounts. 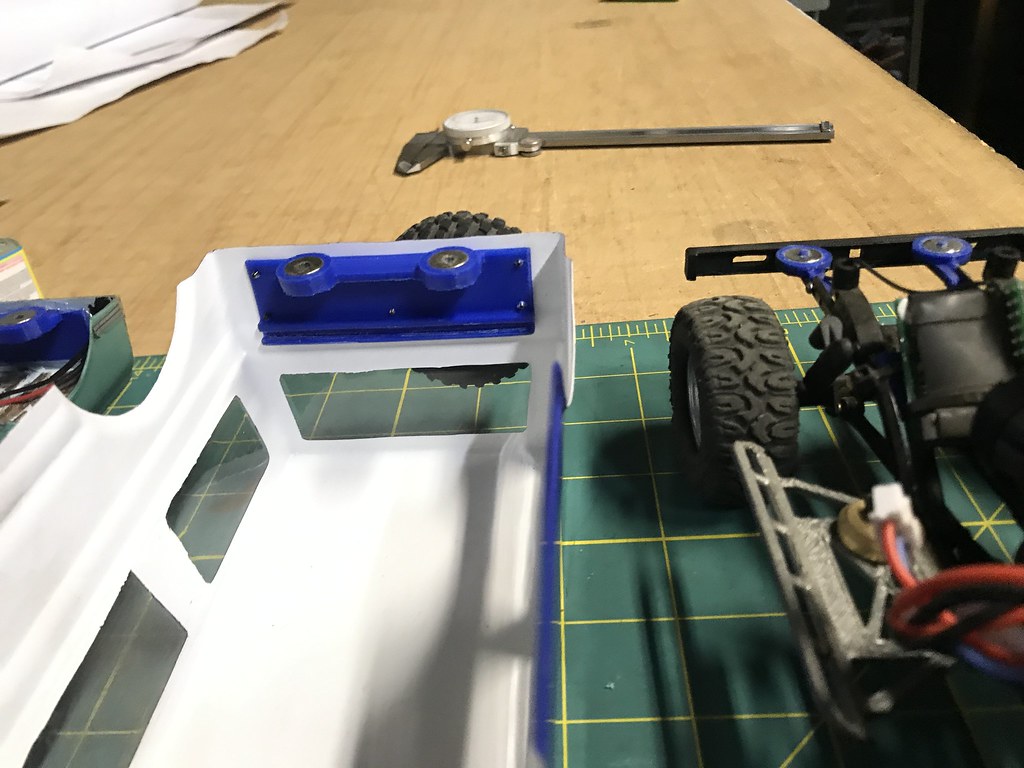 This picture isn't the best, but you can see the backing plate and mag mounts. The channel on the top of the backing plate will be used to mount a half-depth interior. Also notice the little nubbins inside the chassis magnets, they locate inside the opposite mag to keep things centered. 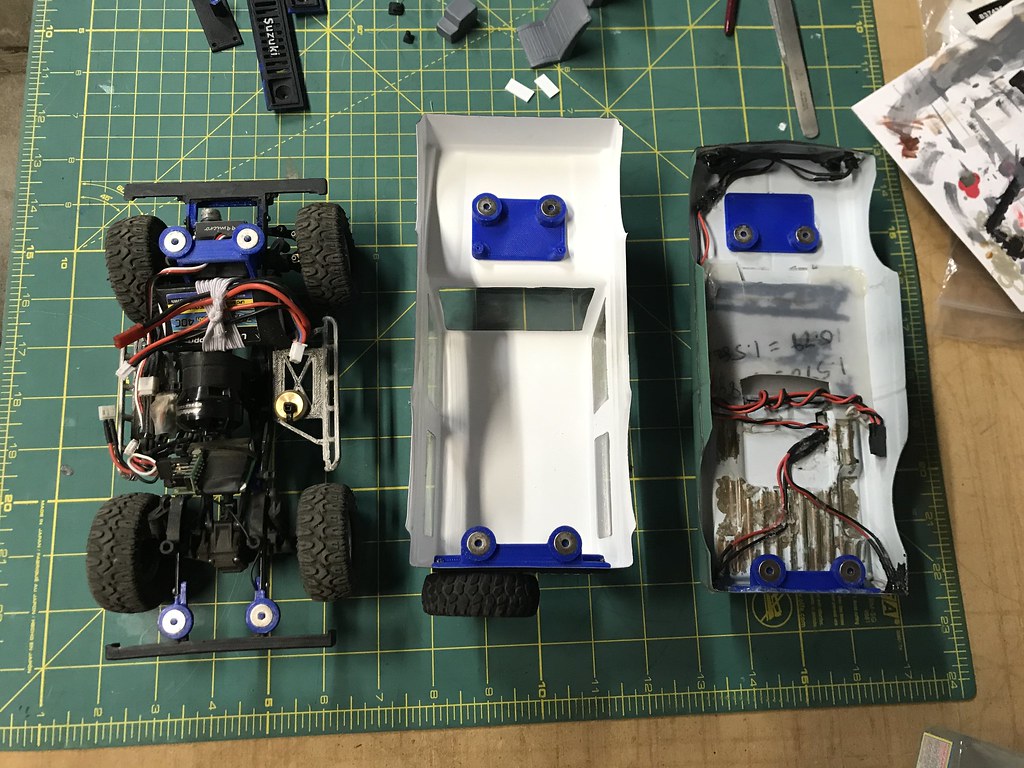 A complete shot of the chassis, plus Samurai and stock Chevy body. Both bodies snap on and off, and so far have proven to be rock solid.

That was a lot of techno mumbo, thanks for reading so far. I'll part with a little garden glamour shot. 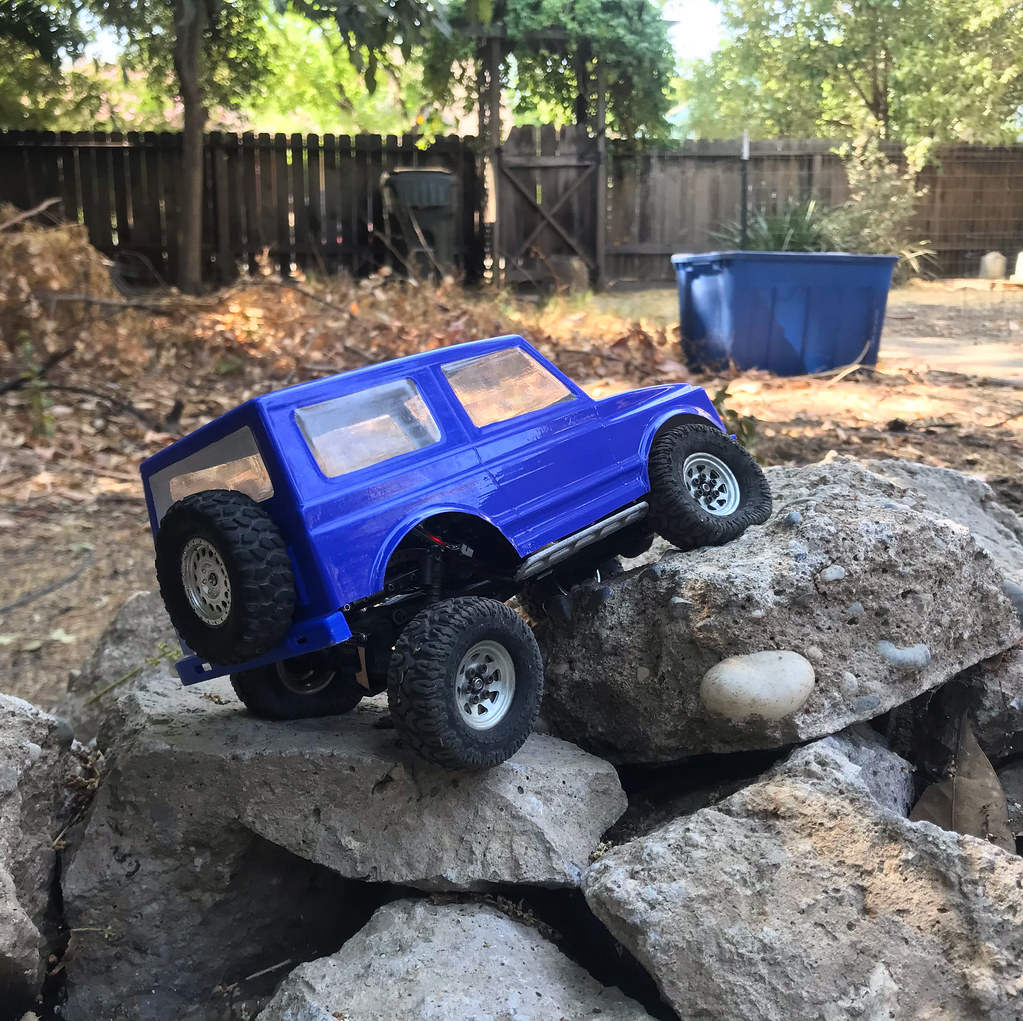 The proportions of that Samurai body look spot on with those rims and tyres.

TLC said:
The proportions of that Samurai body look spot on with those rims and tyres.

Thank you! Yeah I really l like this wheel/tire combo for performance, and I think it really suits this vehicle. The tires are a bit "flat" right now, the foams seem to have degraded from water. I just ordered some Crawler Innovations micro foams to try out.

Thanks! I was supposed to inherit one of these as my first car, but sadly it popped a head gasket a few years too early. I'm a sucker for tiny 1:1 trucks..