I am the best at naming these things.

This started as a Gelande II "Extended Axle Distance Ready to have all it's screwed stripped out because who ever put it together used like 4 tubes of loctite and it literally took a propane gas torch to remove some of them and a cut off wheel equipped rotary tool for the rest." Edition 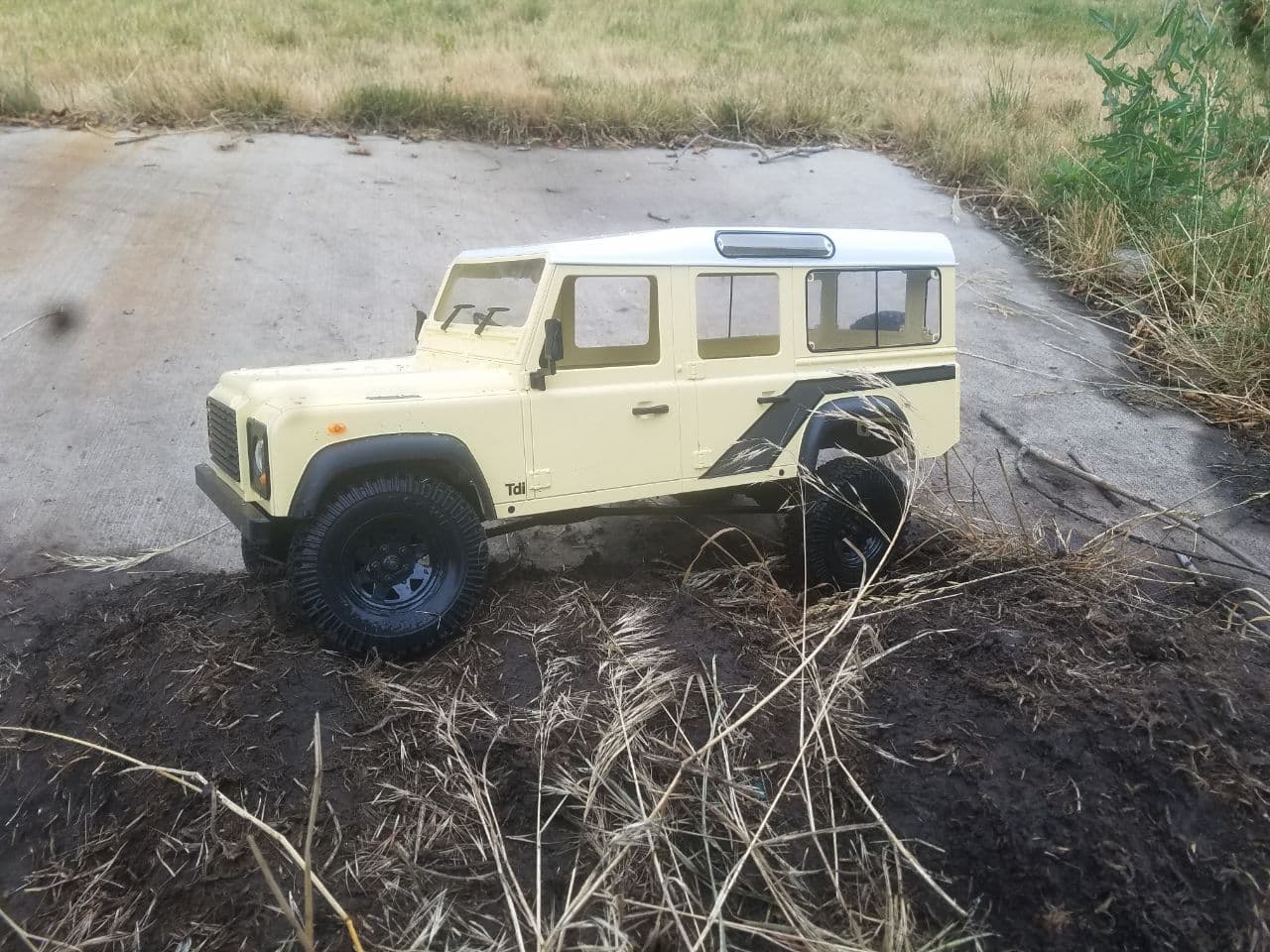 But after some repainting, modification and careful styrene work it looked exactly like this. 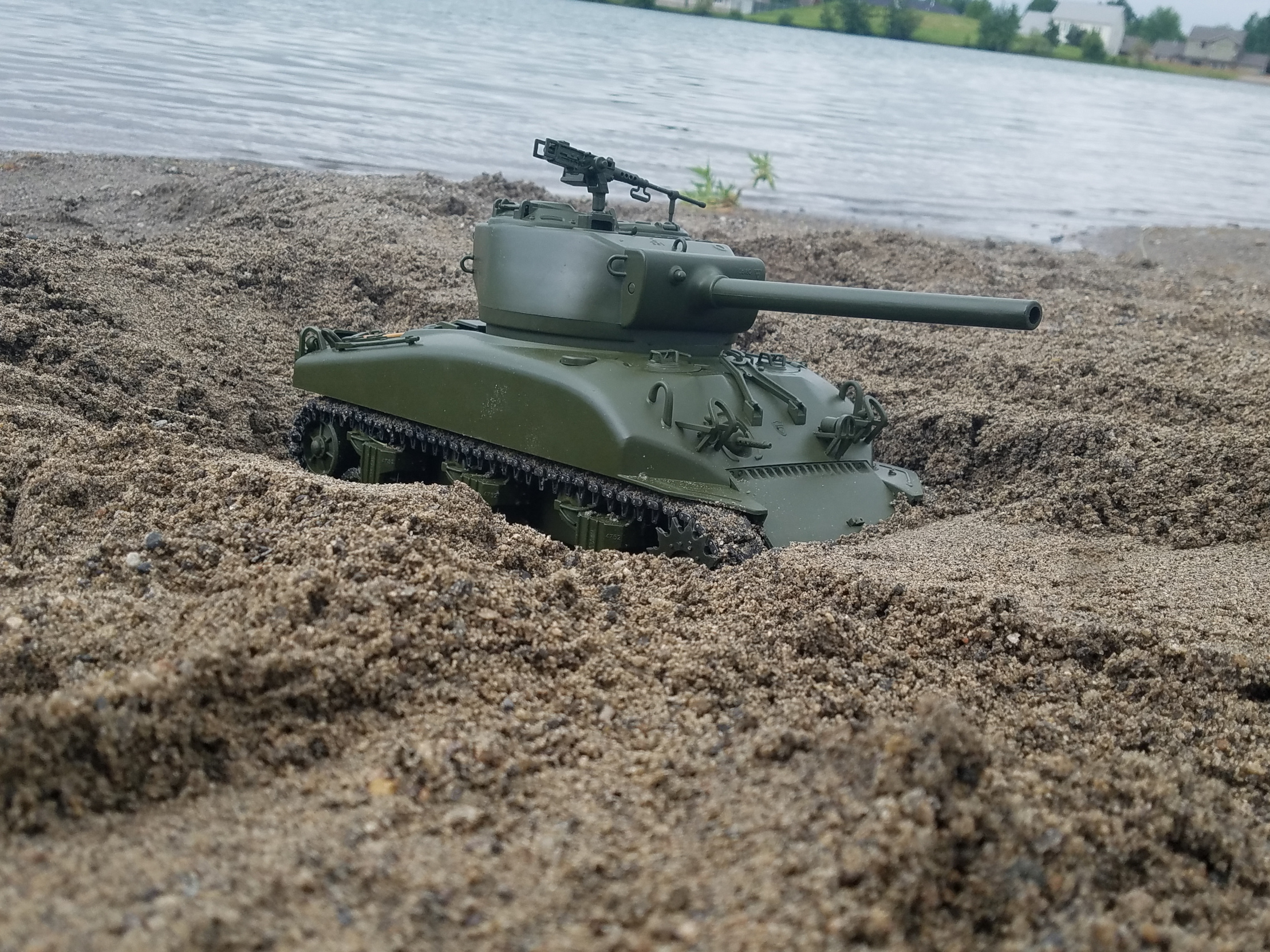 Impressive right? It changed drastically. Not only changing color, scale, vehicle type but location too.
The secret is uploading the wrong photo and just running with it as a joke.
The tank there is a 1/16 Scale Mato M4A1 76 (W)

But after EVEN MORE DRASTIC SURGERY! 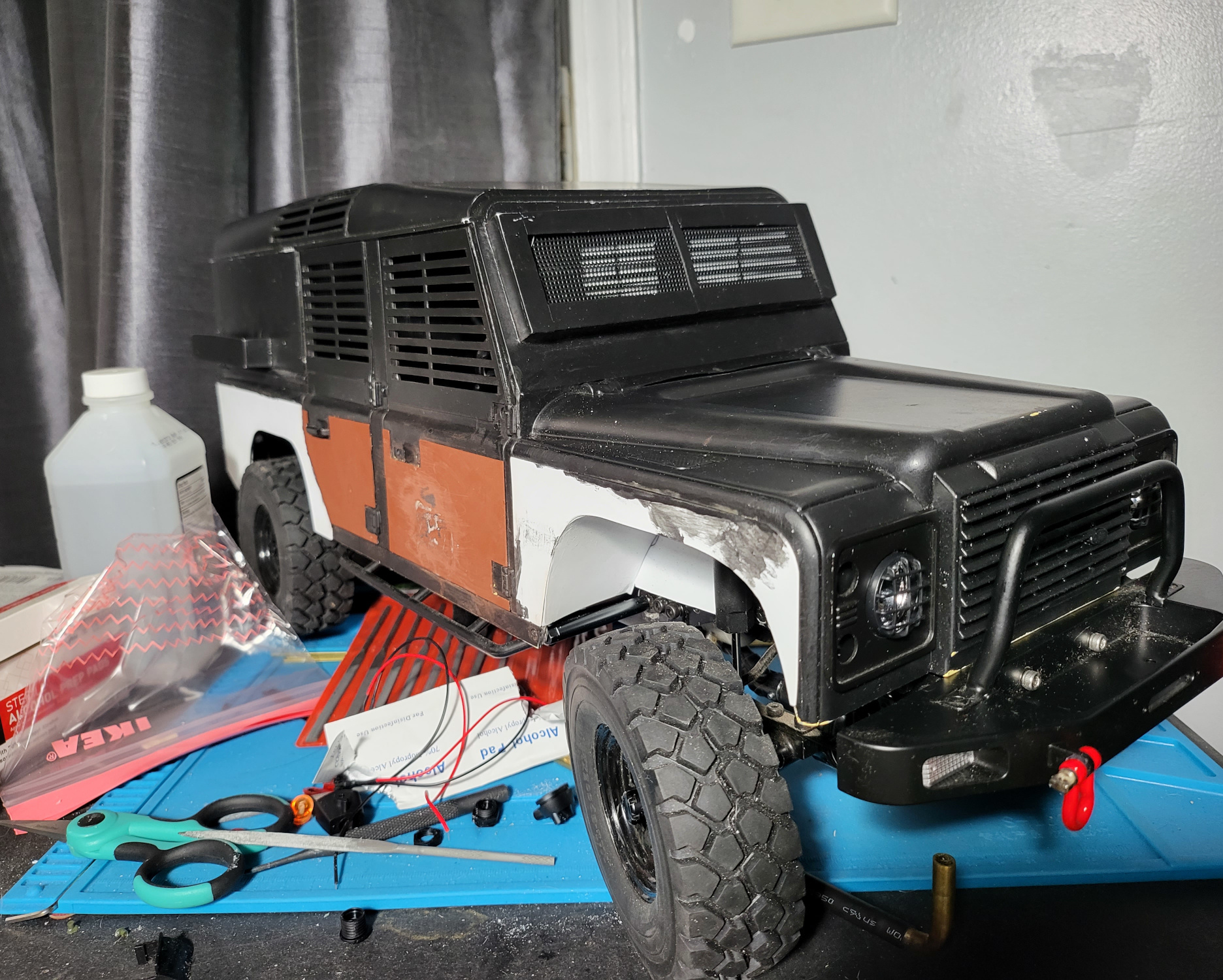 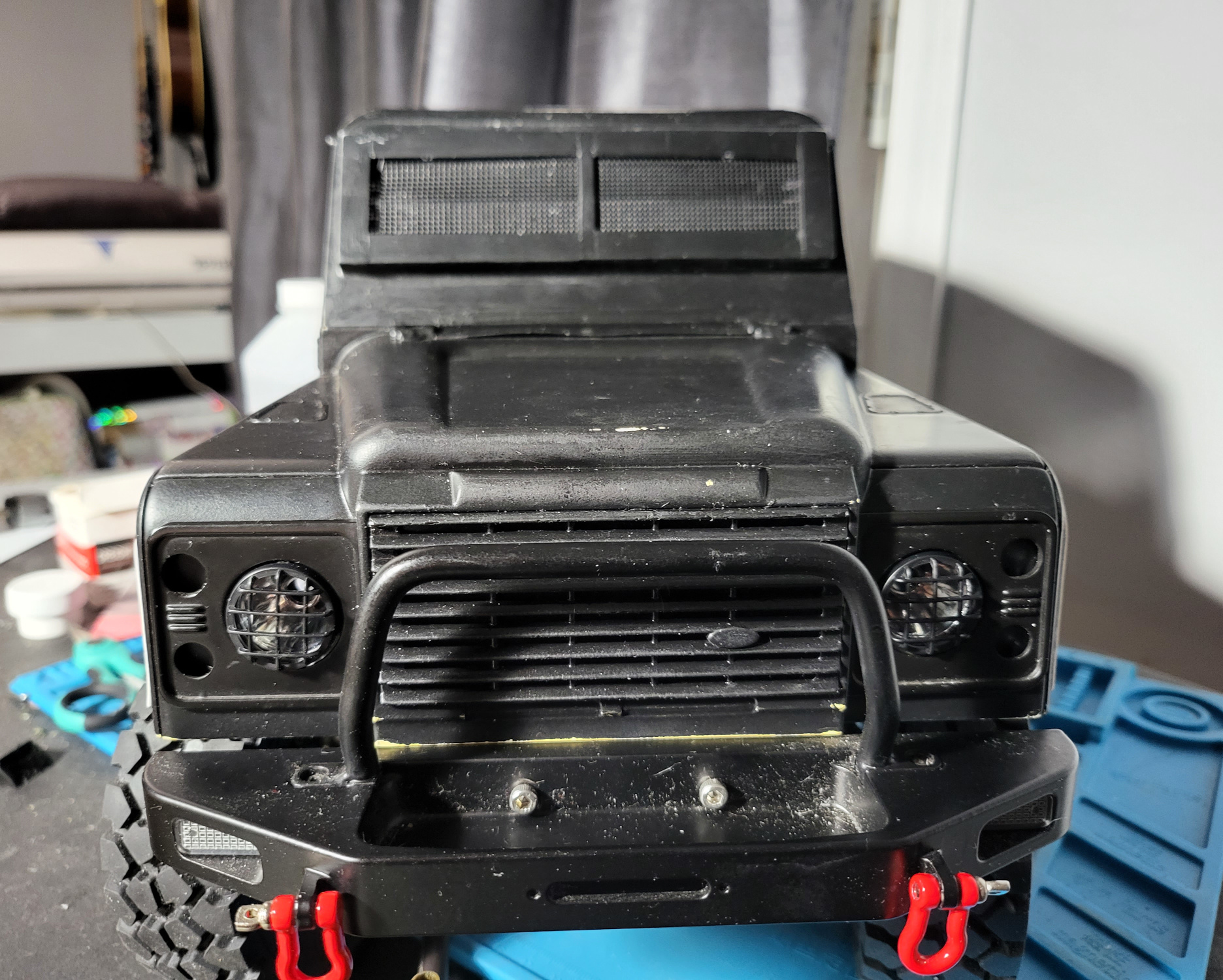 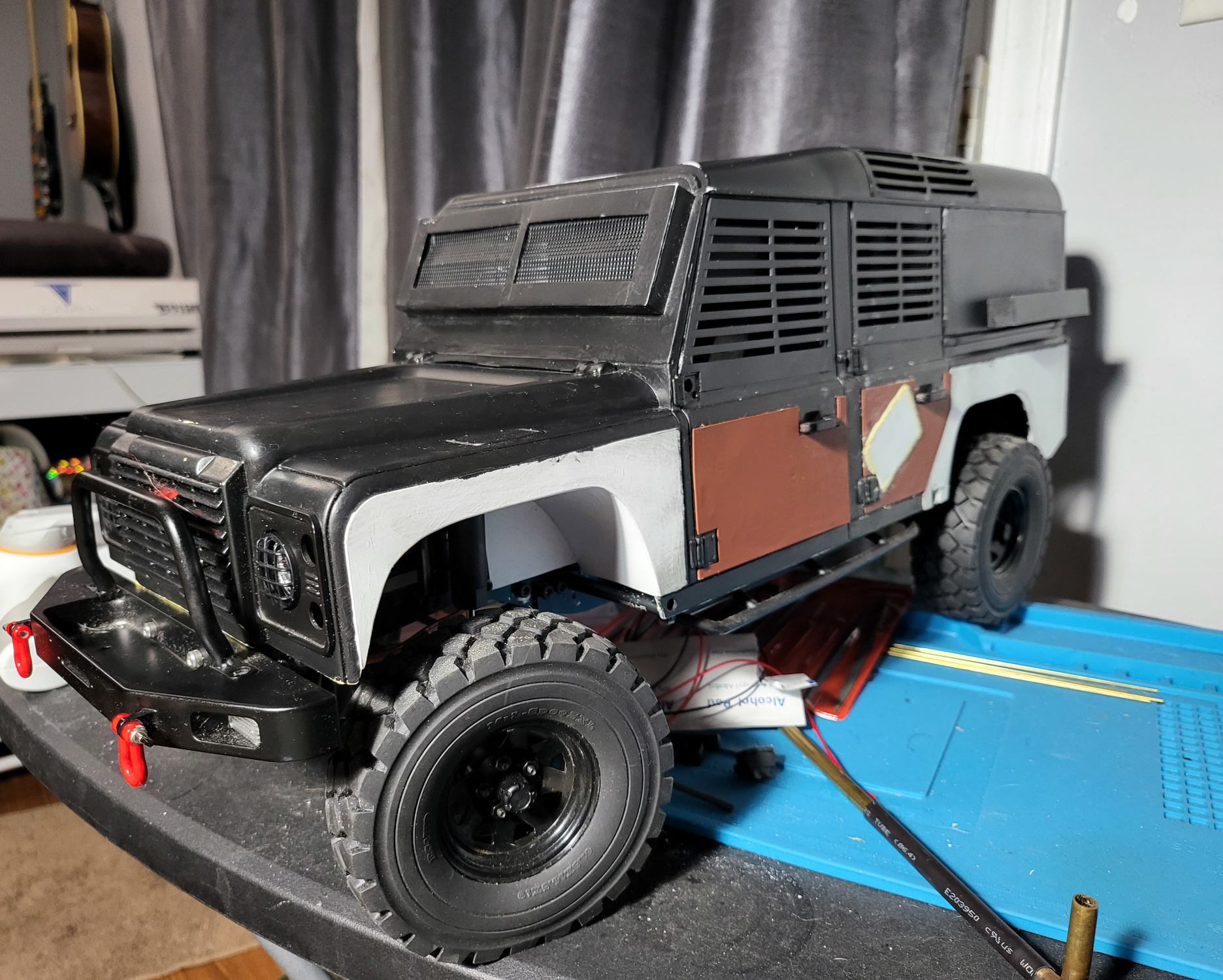 Based on various styles of uparmored SUVs and Land Rovers it's the most Styrene work I've done.
Much of the armor kit was machine cut using a silhouette cameo 3 equipped with the "heavy" blade as it's called.
The window mesh in the front and the unpictured rear is old speaker grill.
The paint is very intentionally bad, as in order to get the look of a Private sector vehicle that has been repainted a dozen times I have infact repainted it like 3 times.

Specs wise it has been given the leaf spring conversion as I wasn't a fan of the way it drove with the links.
It has also been given the rather fetching front bumper and a full set of 5 Mil-Specs. (The bumper is nightmareish to install. took me an hour!)
In order to accommodate such large rolling stock I drastically cut out the front fenders and even the rears.
It features the original and now upside down plastic sliders from Project : Why is it that color? and something I'm messing with is covering the headlights with axial light pod grills as they're a near perfect fit.

I also have an interior pan I built up. It is extremely basic as I want to finish the outside before I continue it.
But expect updates to this one slowly. I have no real direction and work randomly on this one. 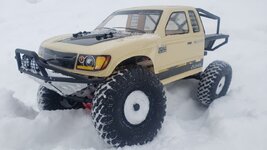 One of the first things I scratch built out of Styrene it's...honestly just fine. It serves the intended function. 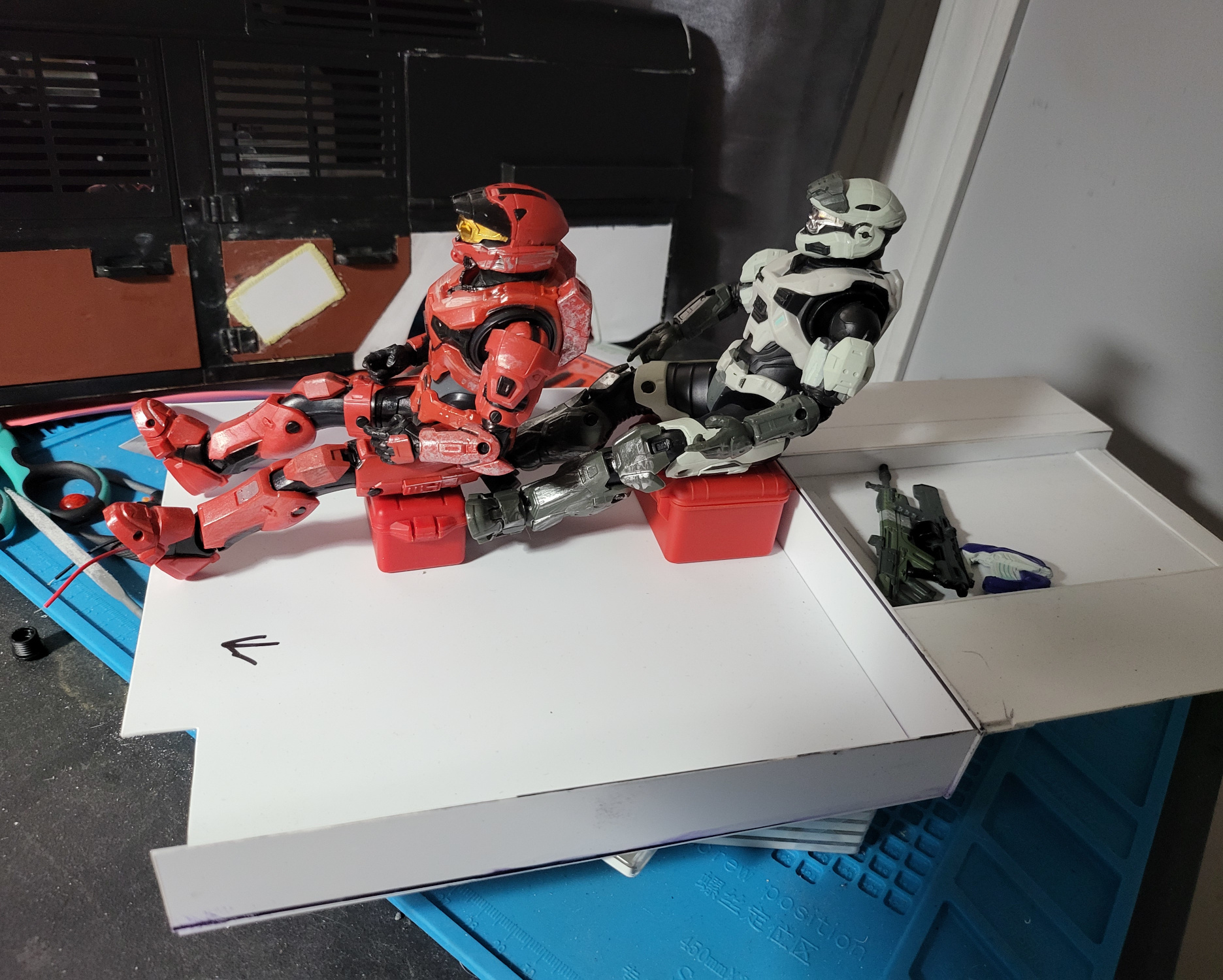 (Due to extreme UNSC budget cuts the spartans will have to settle for old, rather..."well loved"Land rovers.)

It roughly fits my intended figures. It will be much nicer looking than a flat nothing later. For now it's just a mockup. 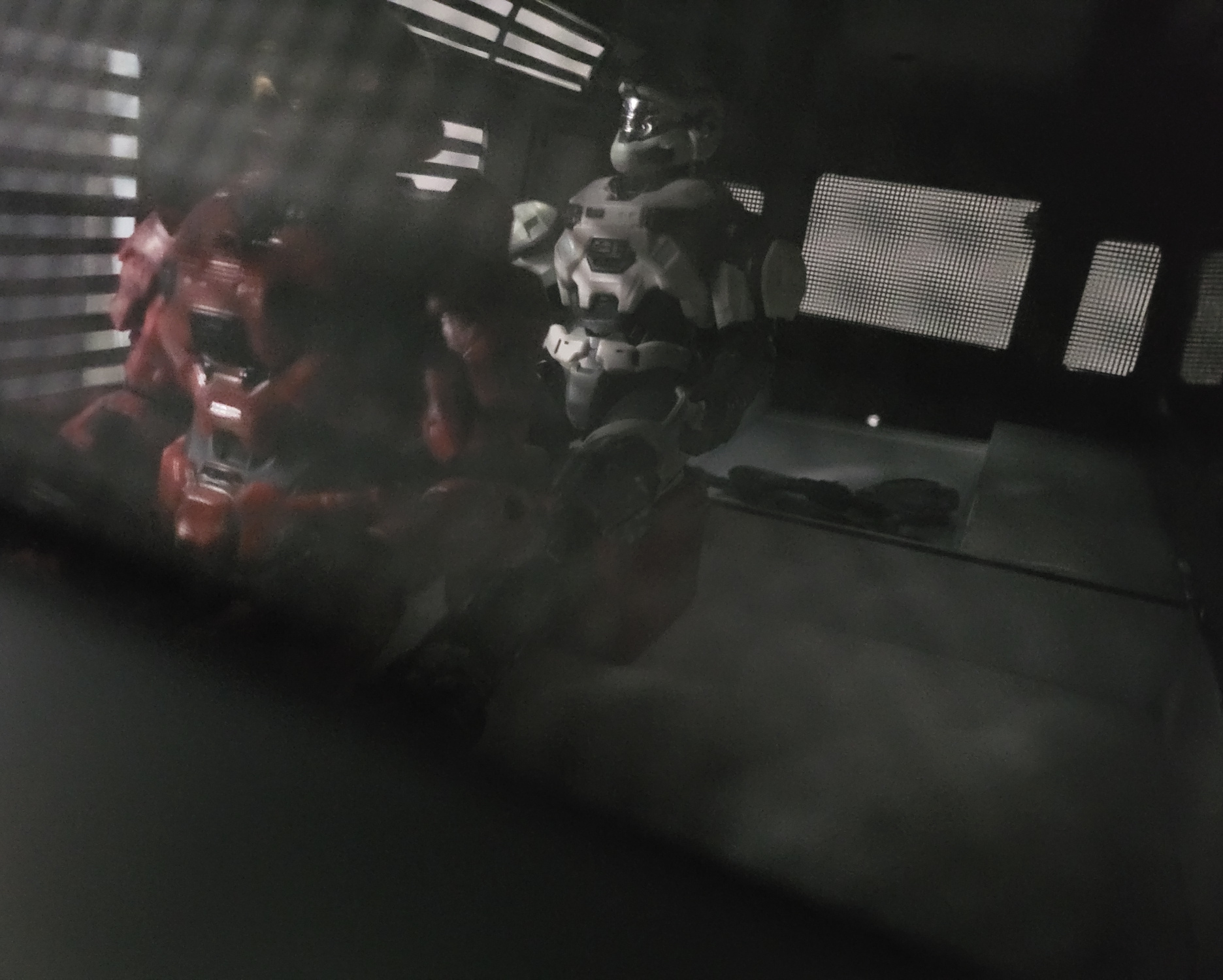 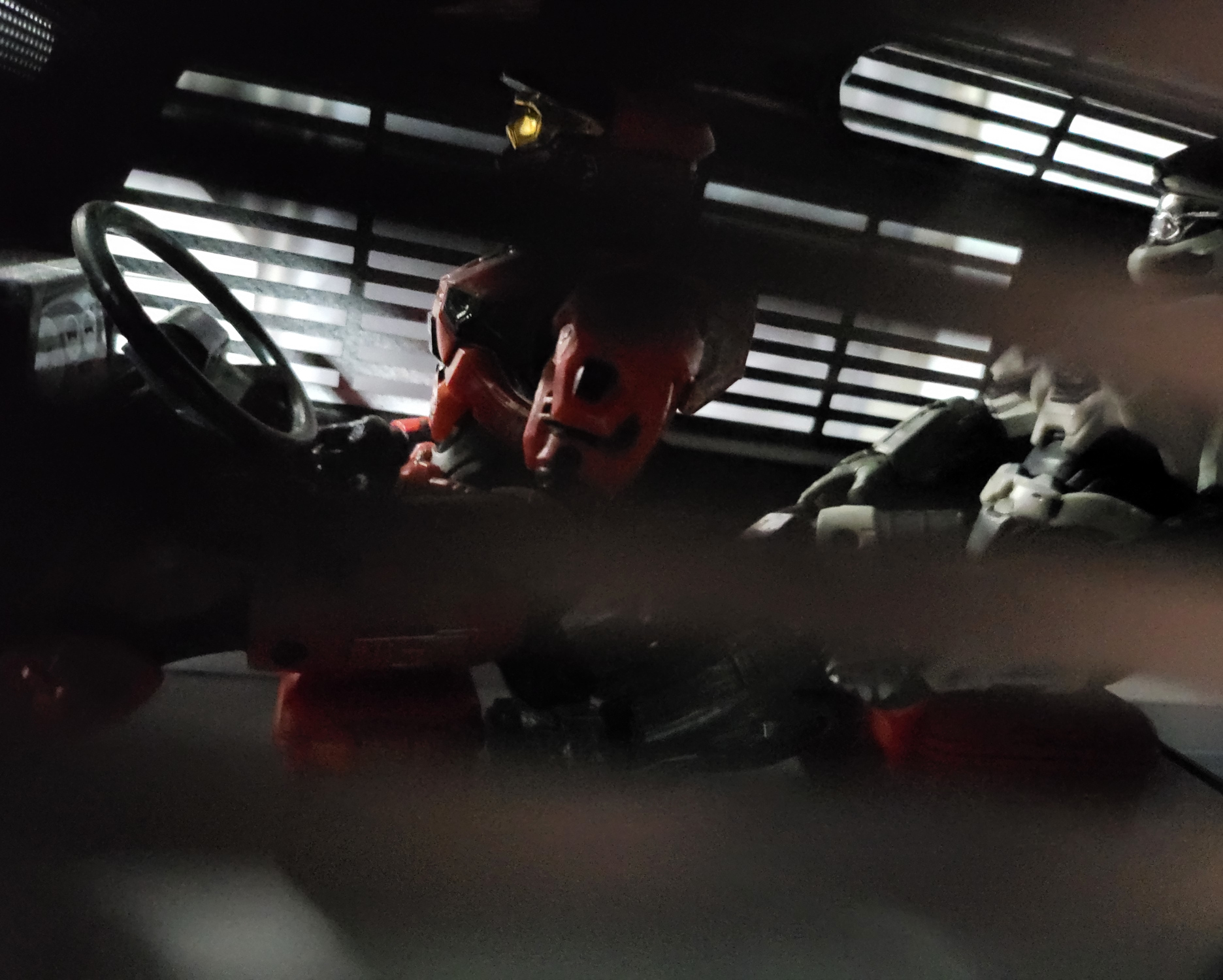 It is very hard to take pictures through the armor.

I like your style Kear. Looking forward to the updates

Awesome!! Where can I buy one of those M4A1 conversion kits?? Do they do them for my SCX10.2 or only the Gelande II?

It's currently running a 45T brushed with Tekin ESC, but I think a 76mm main gun, cast hull and R975 radial would really improve it's performance.....

Seriously though, I like the look you're going for, it's giving me strong Niell Blomkamp vibes.... very cool dystopian/military future feel.

TLC said:
Awesome!! Where can I buy one of those M4A1 conversion kits?? Do they do them for my SCX10.2 or only the Gelande II?

It's currently running a 45T brushed with Tekin ESC, but I think a 76mm main gun, cast hull and R975 radial would really improve it's performance.....

Seriously though, I like the look you're going for, it's giving me strong Niell Blomkamp vibes.... very cool dystopian/military future feel.

I think the conversion I used was for a TRX-4, but with enough cutting anything is possible. Buut I've been fairly happy with the appearance so far, it has been coming together slowly but well.

Since I bought it those years ago (jeeze where did time go?) I have always felt that the lighting situation on these now previous generation "RC atleast 3 wheels driven" Defender bodies is...poor. They look like exactly what they are. Modified toys from many, many years ago.
As such I took it upon myself and the free Axial light bucket kit included with my SCX 10.2 Taco to improve it.

Using the screw in panel mount style lights I've replaced the upper markers/turn signals and one set of taillights.
I to buy another light bucket kit so I can replace some more. Thankfully my local radioshack of all places sells Trail trucks and the parts they're made out of.

Theres still Radio Shacks out there? I thought they went belly up.

SurlyBurly said:
Theres still Radio Shacks out there? I thought they went belly up.
Click to expand...

Indeed. Although the one local to me is more an RC hobby store that happens to be a radio shack, as it's a private franchised one.

Uh- what-....right...clock says it's 2022...I guess I should do something with this eh? So when I last left off I'd added new lights on the front n' back. Well in usual landie fashion it's up on jacks half assembled.

....I'm sure I can sort that. The body might be a little more of a challenge though as I still need to finish the inner fenders for the front, buuuuuuuut there is a major problem.

Yeah, that is the headlight. Lovingly in the way. Now there are a few things I could do about that involving fancy work with styrene to make the inner fender lovingly curve around it or I could just ditch the wildly deep headlight buckets in favor of some custom flat ones that'll play nice. These are of course the problems that come with having wildly cut fenders while still holding onto a 'stock' look front end.