This is not my first tracked vehicle, but my first attempt at a snow groomer. I always wanted to build one since I first saw the Kyosho Blizzard many years ago. Always wished it had looked more scale so figured I'd try building one myself. I've searched plenty of forums for tips on how to create one and since I didn't fancy building the tracks myself I figured I'd cheat a little and use something already available, like the Blizzards metal track upgrade. I did something similar for my other build and it saves a lot of time and frustration (...also, its 1/8 scale so building tracks would require some fine machining/riveting that I wasn't too keen on).

I noticed most RC versions were modelled off the Pistenbully brand and since I wanted something else, and had a Prinoth local to me, I figured that would be the more interesting choice. After taking some measurements of the real deal I started planning the chassis layout and soon realized the track width were not 100% to scale. I re-evaluated creating my own tracks, but decided to alter the width of the chassis instead. Its pretty close!

With the size of the tracks the scale works out to be approximately 1/8 or close enough.

Started the build by printing some wheels and trying to make it look as real as possible with the restrictions of the belt width and the alignment of the running wheels to the tracks. The chassis followed based on the overall dimensions and although its wider than the original the body covers some of it and hopefully it will look Ok when done :) 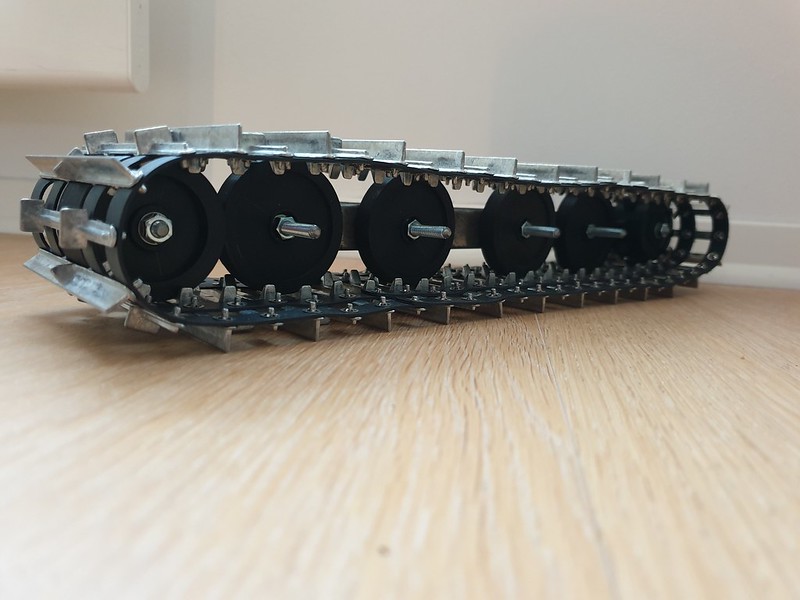 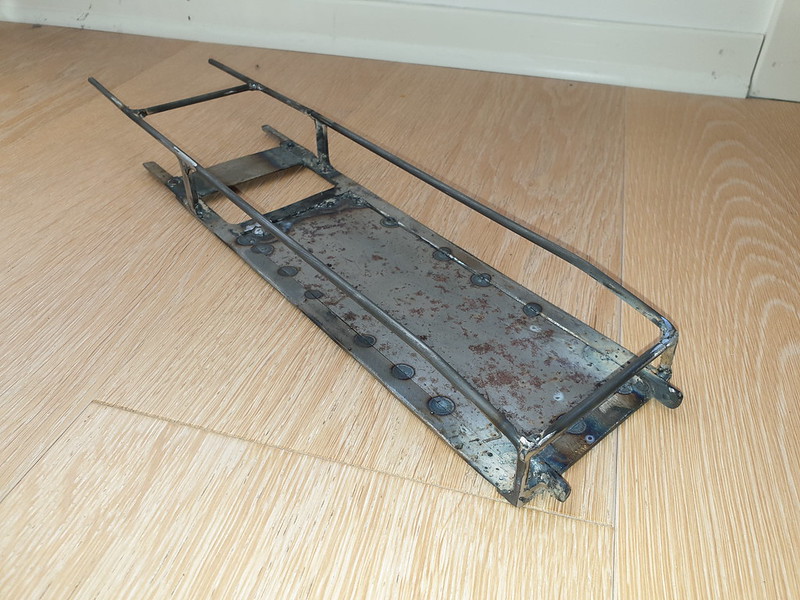 First attempt at engine mount. Locked the diffs, but the drive shafts were to weak and the gearing not low enough. 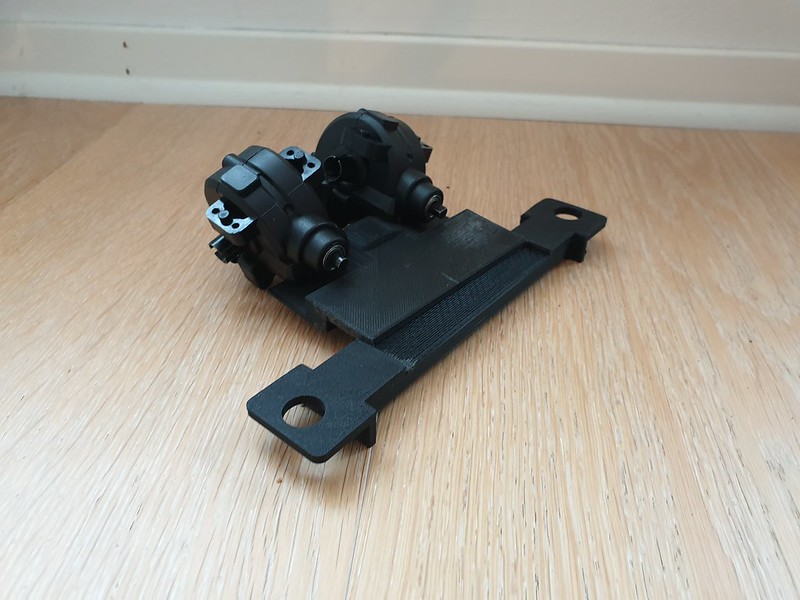 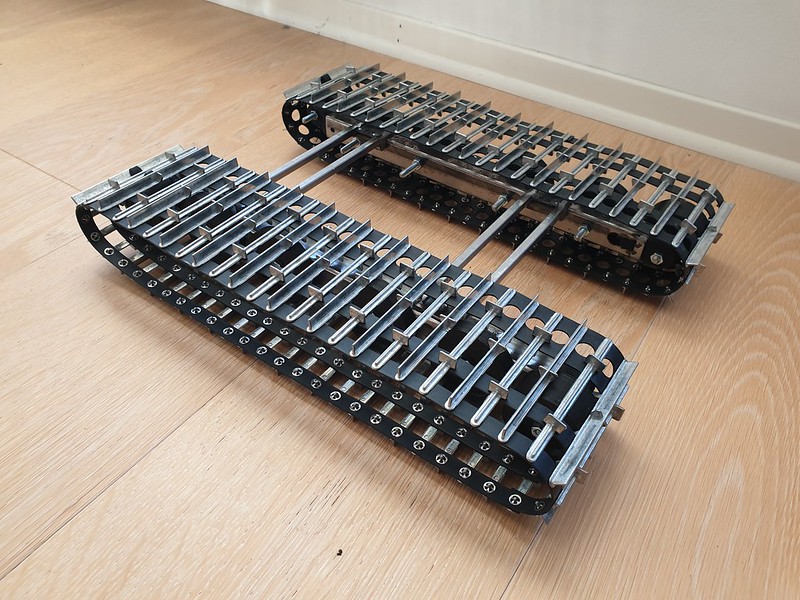 Wheel tensioner. The belt is pretty flexible so haven't had to adjust it much, which is good because there is not that much adjustment to be made :) 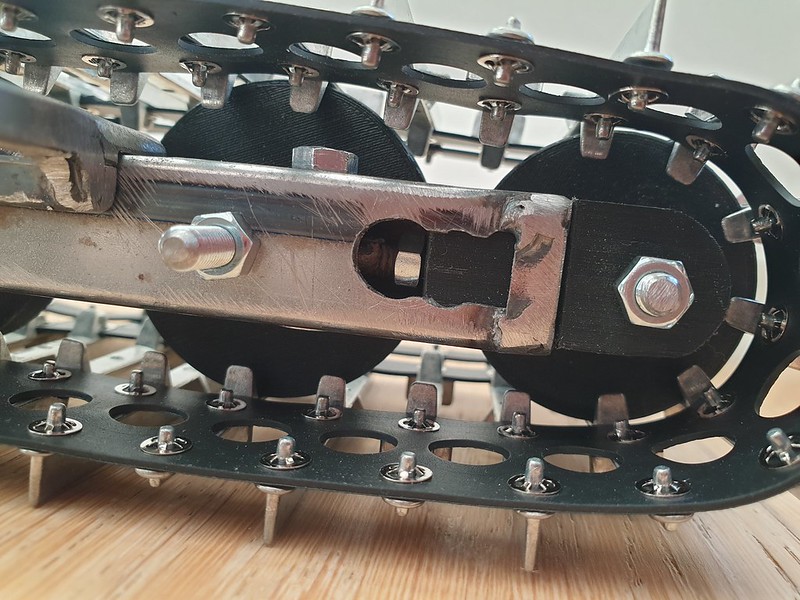 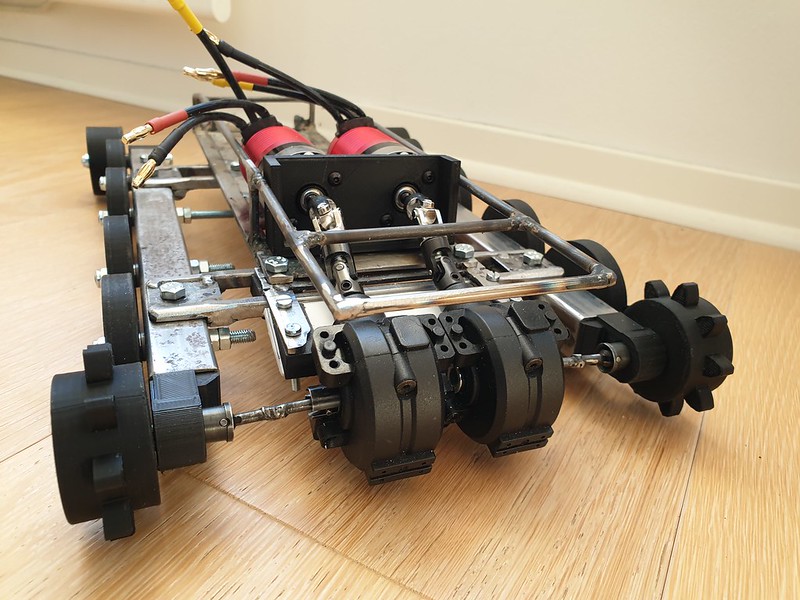 The weak link of the first prototype 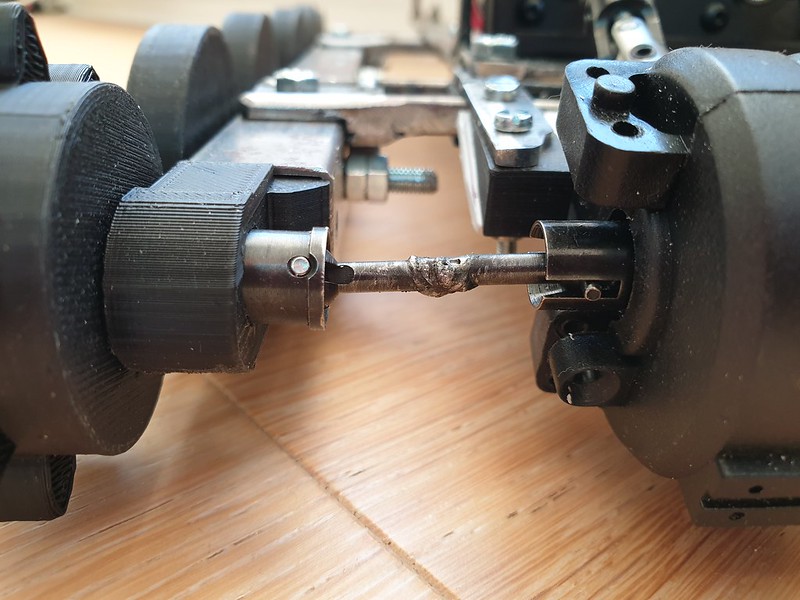 Blade made of steel. A bit heavy but its super solid. 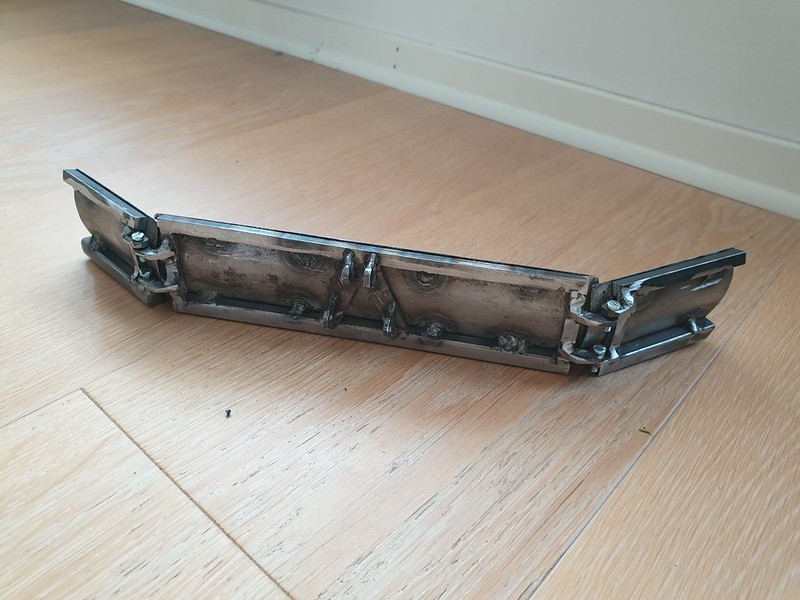 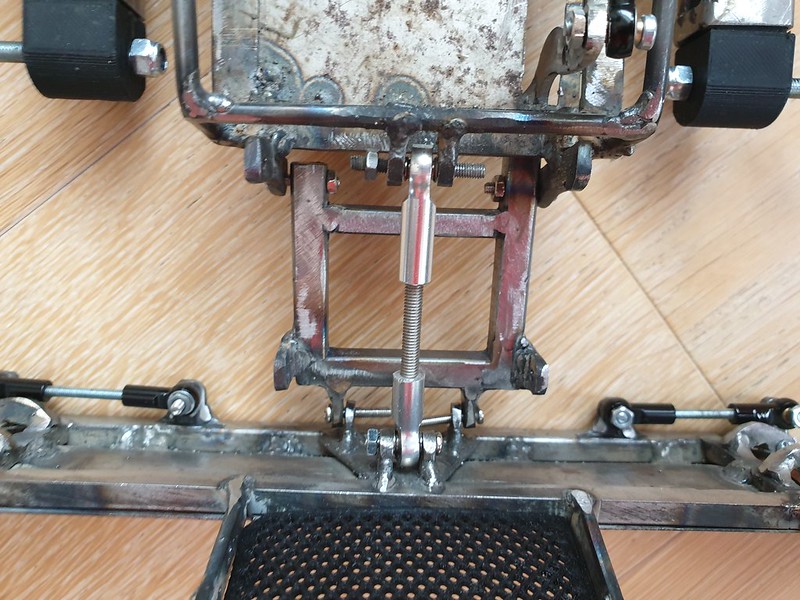 After I broke the drive shafts I reconsidered the engine layout and ordered som low geared motors of the interweb and its much easier to drive now. Much stronger too, which is good with the heavy and tiller. 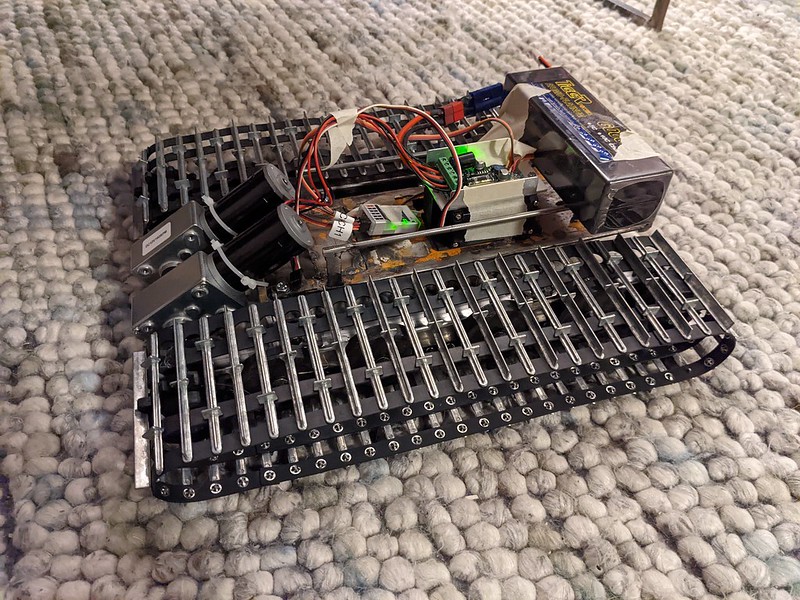 I also made a new chassis as I wasn't happy with the first one. It didn't look very scale, but it helped me figure out the dimensions I needed.
Saved some weight with the aluminum as well. Another reason was that I realized that Prinoth had come out with a newer model than the one I had based some of my dimensions on so I had to upgrade :) 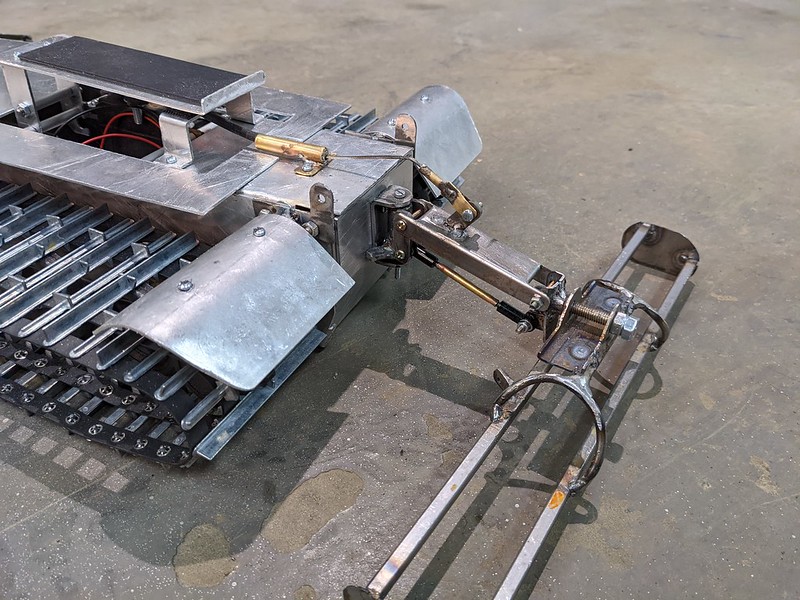 Improved the front blade mount as well and much happier with the look of the front now. 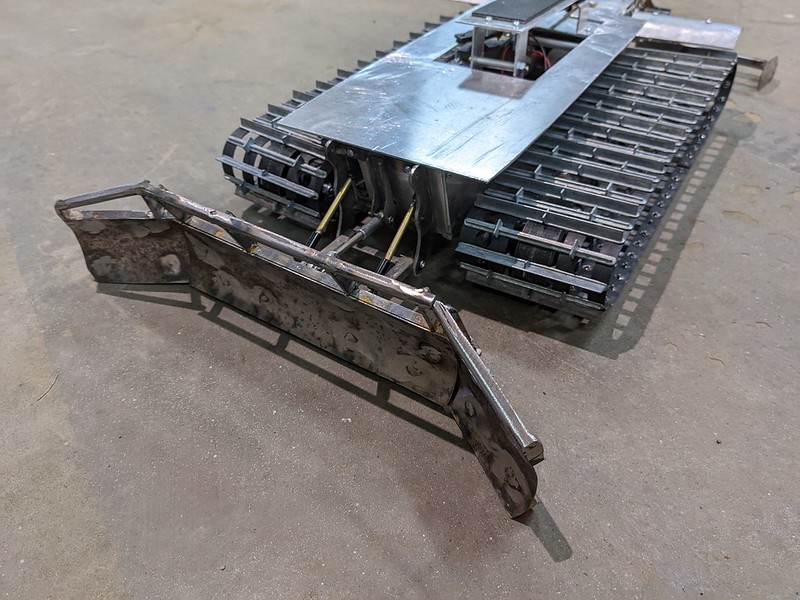 WOW! Super great fabricating work! Really like the direction you're taking this. Is the plan to have a tracked controller like the Sabertooth?
M

Yes, I'm using a sabertooth right now and it works much better than two separate speed controllers. I need to order som new motors with higher max rpm, but it drives pretty well as it is now, just a bit slow.

I also tested some linear actuators for raising the blade, but its a bit slow to react so the plan is to use some big servos and see how that works.

Here is the progress of the body. I found some rough technical drawings after I started sketching, but its not too much off.
I have since made the doors larger, and I might have made the light enclosure a bit too tall. 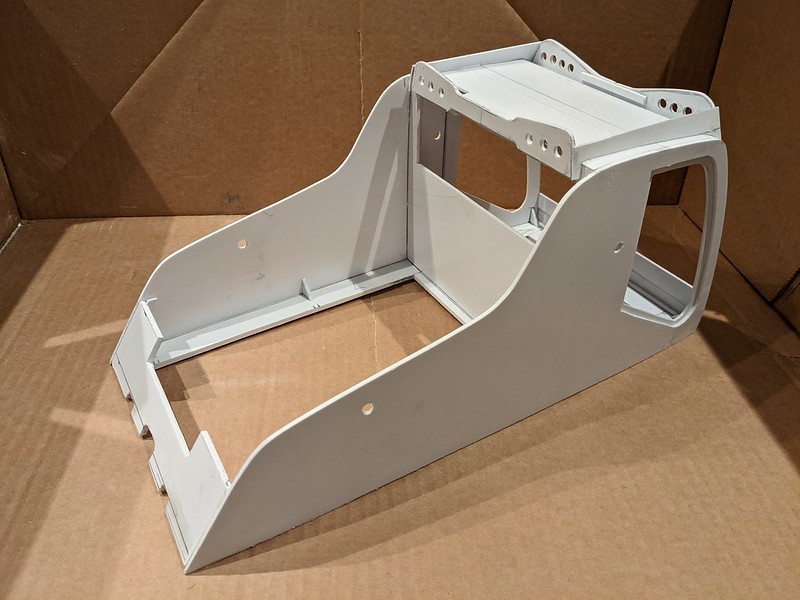 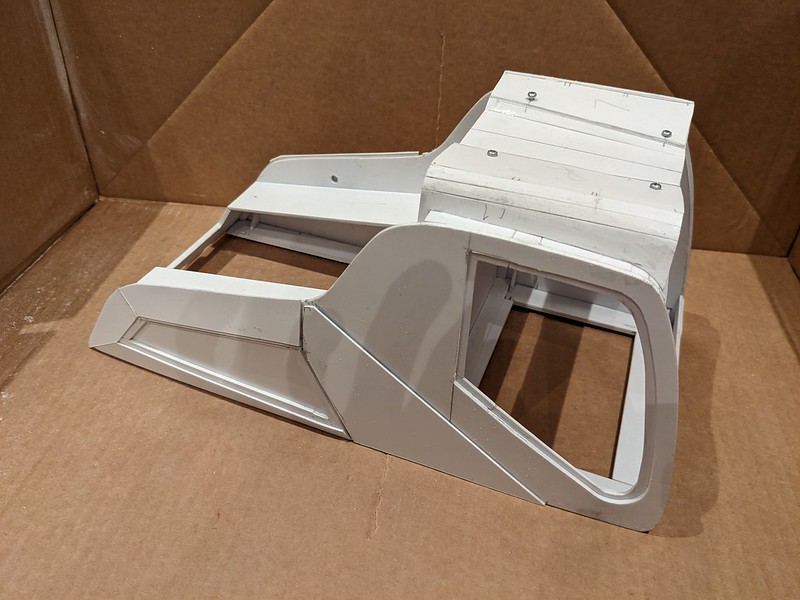 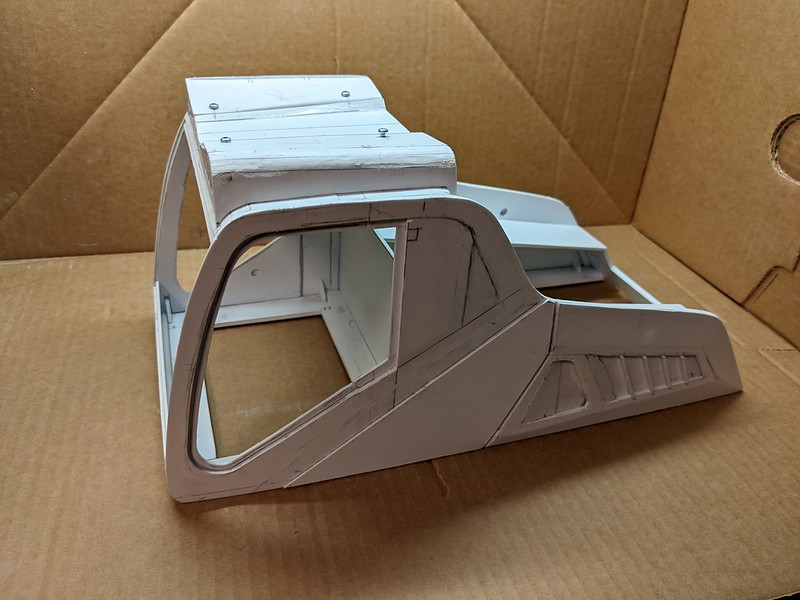 This is some beautiful work, I feel pretty humbled when I see this type of build.
M

Thank you! I've only done some minor work with styrene so this is my first attempt at doing the full body. My other project, the BV206, I ended up using balsa as it was easier to bend, but in hindsight it would have been nicer to use a more solid material that doesn't dent as easily. Future project maybe

I'm curious to see how hard it will be to get a good final finish after I start with bondo and sanding. Not really looking forward to it as I know how much sanding there can be...

I need a driver so if anyone knows of any decent scale figures that will look the part let me know :)
F

Looks like you're off to another really good start! Really digging how substantial you're making the chassis and attachments, should be bulletproof

Which type of 90 degree gearmotors did you upgrade to?

With the driver, what look are you going after? And about what scale?
C

Frizzen said:
Looks like you're off to another really good start! Really digging how substantial you're making the chassis and attachments, should be bulletproof

Which type of 90 degree gearmotors did you upgrade to?

With the driver, what look are you going after? And about what scale?
Click to expand...

I'm using "High Torque Worm Geared Motor 12V 24V In DC Motor Shaft Length 51MM Speed 5 To 470RPM Self Locking Adjustable Speed Reversed" from Aliexpress. I think I got the 160rpm/12V motors and running them on 3s lipo is just a bit too slow. Will probably get the 260rpm or maybe 470rpm next. I think they will be plenty strong for my application. At the moment it weighs alot, but on packed snow it seems to work fine. I have a feeling I'd need wider tracks for soft snow.
M

Working on the box/cage for the hydrogen canisters. This will double as a battery box and gives me some more room for the electronics. I haven't really spent much time on packaging and this makes it easier. 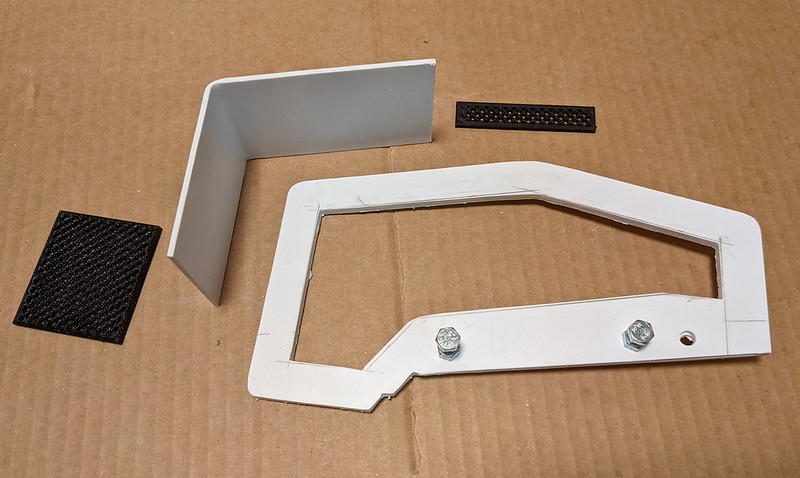 Frizzen said:
With the driver, what look are you going after? And about what scale?
Click to expand...

Forgot to answer this :) I'm just looking for male/female model that would look decent as a snow groomer operator. Don't need anything fancy :)
The scale is 1:8.

Found someone who mentioned classictvtoys.com and they look really good so I might theck that out. Looks like I will have to dress the figure too but seeing as the operator is so visible in this model I might have to splurge

Will have to take some measurements to see which height will match my model, but 8in seems about right.
F

I had thought either Bob McKenzie or Doug McKenzie figure from 'strange brew' and 'great white north' might look good in there if scale fits.
Or there are some Snowboarder figures that looked dressed for snow grooming

Thanks for the motor info. Any idea what size motors those use? I was messing with some of the same style smaller & cheaper Silver can 370 gearmotors, and it's not enough for that project. Thought i may need to look into those Black can gearmotors
M

Not sure, they are almost bigger than a 540 size motor and the gear box is almost as big. Not ideal for my application as they hang down too low, but they are super solid, strong enough and it seems to work, and I think the weight of my model would not allow it to float on top of powder snow regardless. Maybe if I could have reduced the weight even further and had wider belts it might perform like the real deal :)

And thank you for the figure suggestions!
M

Some more progress :) Worked on the hydrogen canister box yesterday and I'll have to start figuring out how to make the canisters themselves, and figure out how much room I actually need inside. 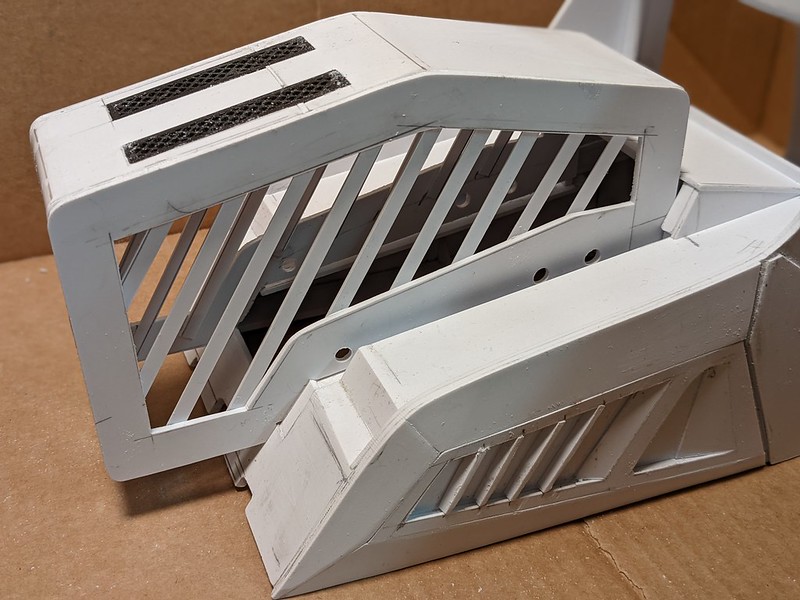 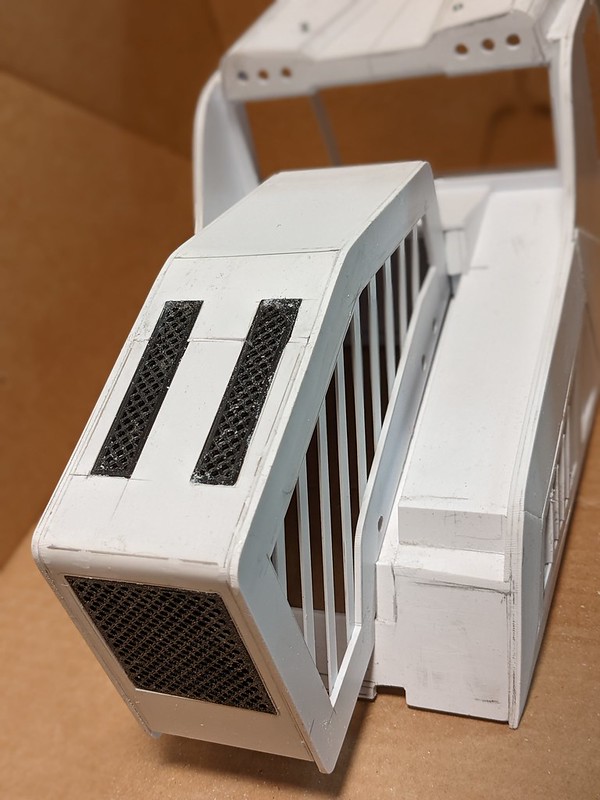 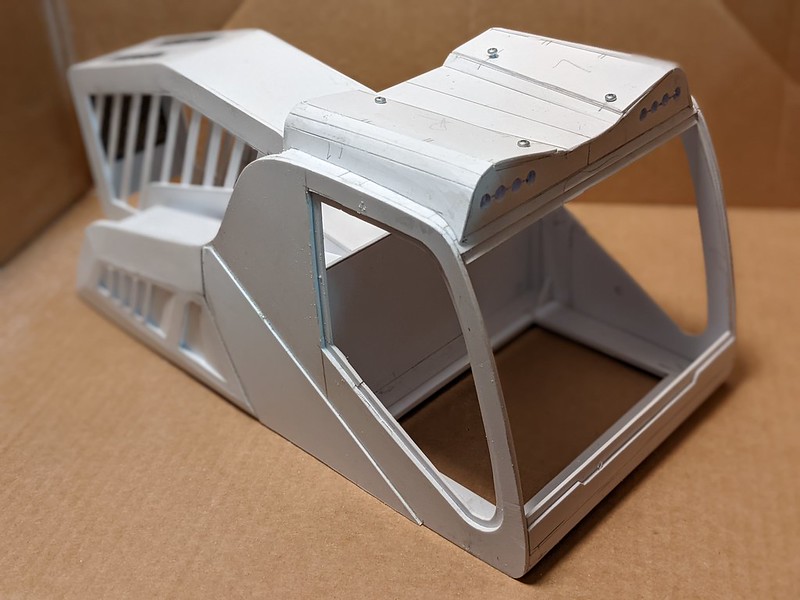 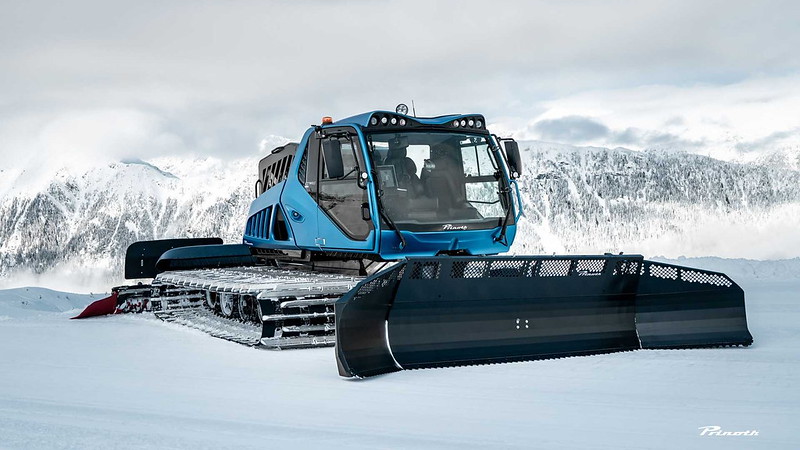 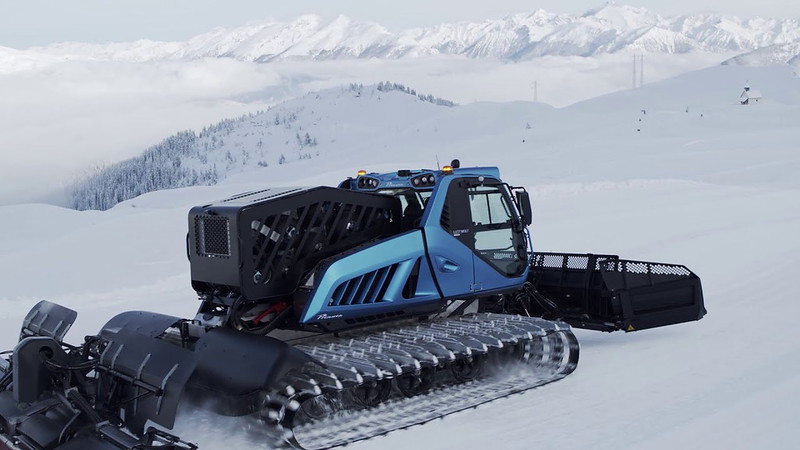