"Sometime in 2561 a group of Spartans managed to slip through the cracks of time, landing in 2021 they quickly realized something was wrong. They had no transportation. They quickly set to work to assemble an M12 Warthog. This is the thrilling story....that is barely even started."

Alright so- This is the first body I'll've ever scratch built. Why exactly did I choose the warthog? Simple. I want one. And I don't have the time and money to buy and cut up a hummer to build a real one so I may as well build a "tiny" one I can put my Halo Figures in.
Anyways I started by finding some good lineart of the M12B (The M12B is the version with realistic IFS and IRS.)
This proved kinda hard but with a little bit of...uh- luck?
I managed to find a good side view and using some special tricks with a 3d model of the Halo 5 rendition I managed to generate a top view. I then scaled it and printed it out.
Took 4 sheets of 8.5x11 for the top view! But with that sorted I set to work.
I'm going to be somewhat simplifying things as I can, as the M12B being from the newer Halo games is very detailed, having lots of strange little shapes and ridges in places.

Chassis Wise I'm thinking I'll get two Element IFS units and just kinda shove em on something until it fits, that'll solve the AWS too.
Thankfully I'll have plenty of room to play with for the powertrain as the warthog design suffers from what I call "Humvee" syndrome. Where the interior is tiny despite the extreme footprint.

Oh. Before I forget, could someone with an Element IFS truck get me a measurement of the hub to hub width while it's sitting at normal compression? This thing is wider than most bridges and I'm hoping I can get the stance right with some seriously scary offset. Which is correct for the in game version.
But enough talk. Have pictures. 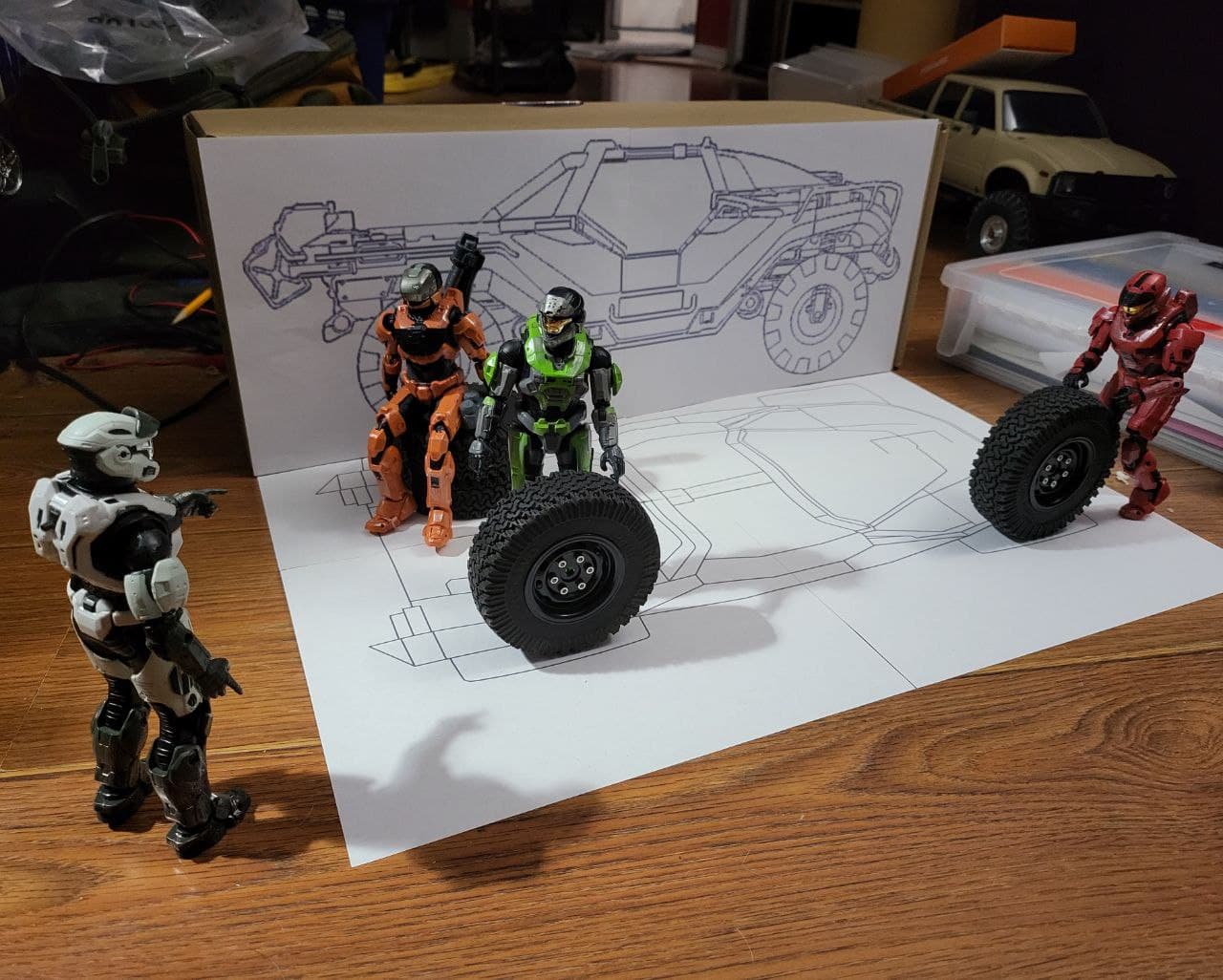 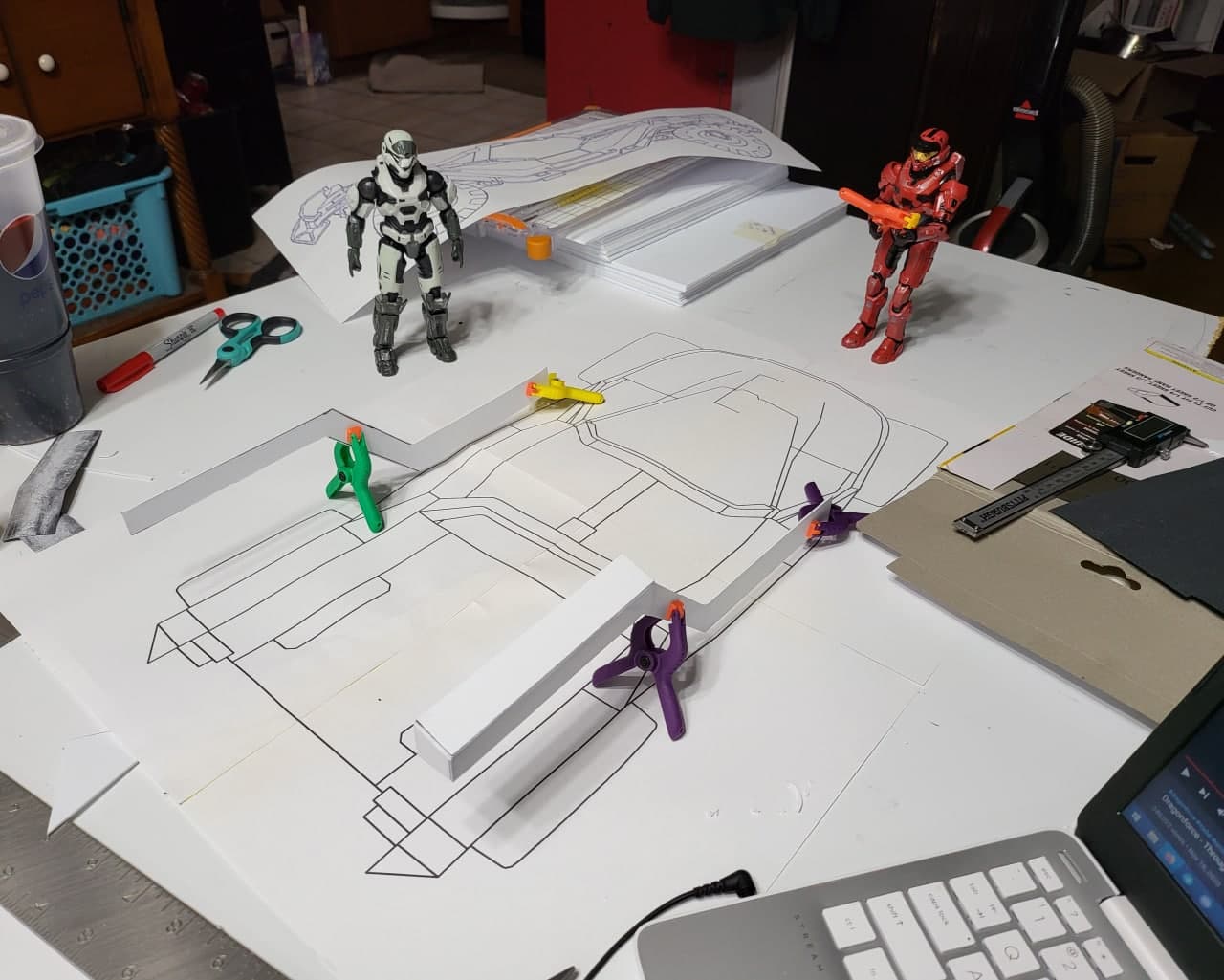 This thing is going to be massive. It's only 1/11 scale and it should have a 341mm Wheelbase.

Love this hobby, this will be amazing. I’ll keep an eye on this one

Here's a 1:1 scratch built Warthog, might be good for certain angles or inspiration. Luck mate.

UpsidedownRC said:
Love this hobby, this will be amazing. I’ll keep an eye on this one

SurlyBurly said:
Here's a 1:1 scratch built Warthog, might be good for certain angles or inspiration. Luck mate.
Click to expand...

I certainly hope to...hmm, not disappoint or underwhelm, those positions are taken already...has anyone claimed "Falling short of expectation?" or perhaps "Present the bare minimum?" Anyways. Here is a small update.

While certainly far from perfect and...perhaps rather crude. these are the most complex shapes I've ever made with Stryrene so far and I'm extremely pleased with how they've turned out. I've also decided that I'm most likely going to narrow the whole body from about 9 3/4 inches (247mm) to 9 inches (228mm) to make stancing the chassis easier This shouldn't affect the appearance any more than my shoddy craftsmanship will.

Off to a great start.
Going to be lots of scratch built angles awesome .
More please.
D

This brings me great joy

. Can't wait to see what paint scheme these Spartans go with...

Ah. Yes. I forgot to post an update because I are am have the stupids.

Anyways progress has been slow as I've been busy doing other, much much more boring things.

But so far I'm rather happy with the progress I have made. There will of course be my usual milliput work to make things look less..uh...bad.

I've also done more messing about with the over all width of the body I've found that I can make it between 8.5 and 9 inches and it'll not only fit nicely on a normal width trail truck but it'll look reasonable.