After this week's livestream, I realized that the main thing my trucks were missing was some Lynyrd Skynyrd at maximum volume, filling the ears of everyone around and bringing them incredible enjoyment and happiness.

In reality, I'd happened to order a small, cheap bluetooth amplifier and some 1.5" full range speakers to experiment with different style speaker enclosures a couple weeks ago. During the livestream, I realized that I was fixing to have some scale 15"s on my hands, and adding the requirement for the speaker boxes to have space constraints would be a fun challenge.

So, on to the components. The amplifier I picked up is a XY-P15W that was like $4 on eBay. 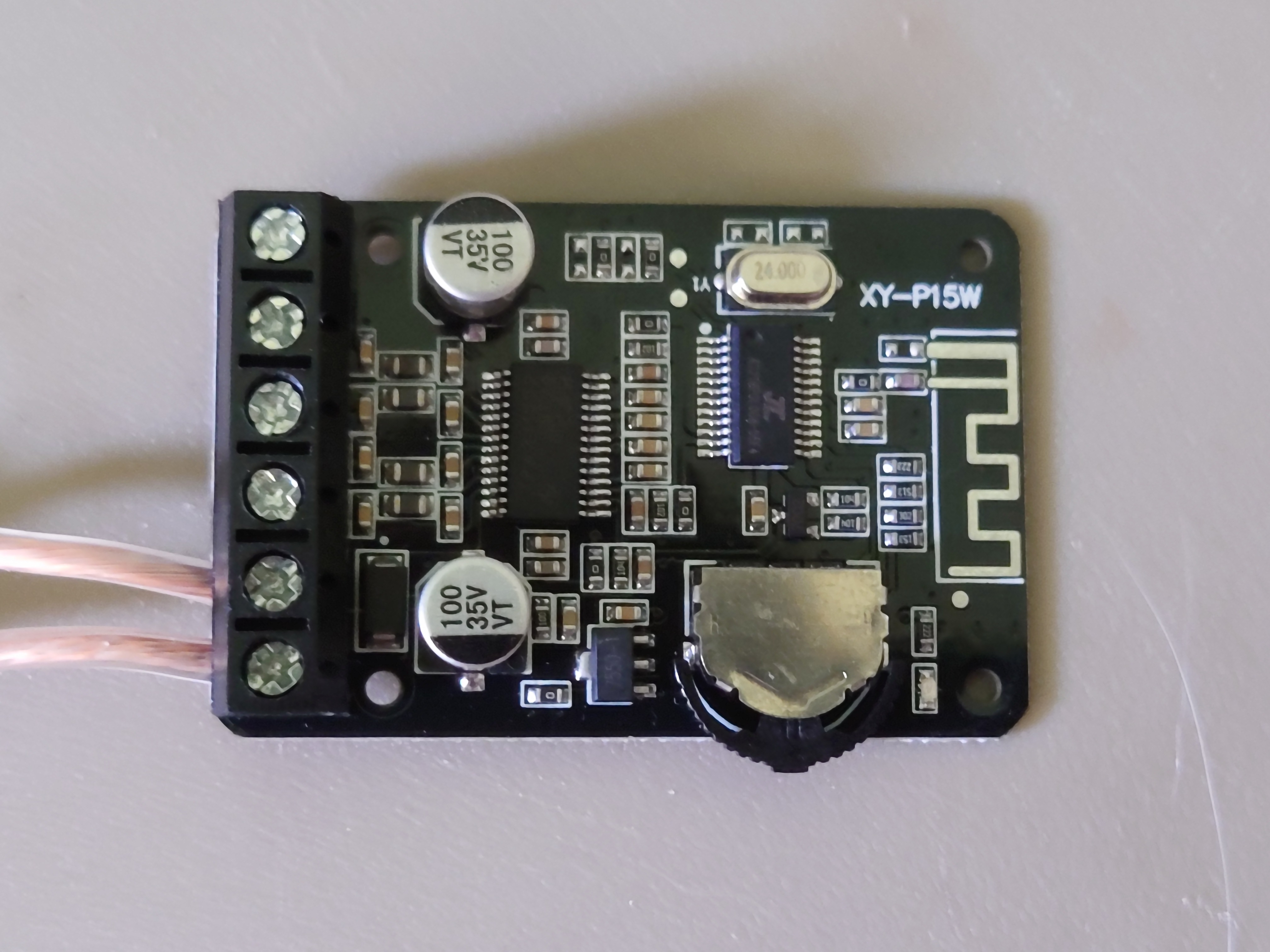 Supposedly, it's rated for 10W RMS at 8 Ohms for 12V, but who knows with cheap Chinese electronics. I was already planning on powering it with a 3S LiPo, so adding either an extra battery or a splitter on the truck's battery shouldn't be too big of a deal. It's surprisingly tiny, so hiding it somewhere shouldn't be very hard.

The speakers that I'd already ordered are Dayton Audio DMA45-8s. They're 8 Ohm, 10W RMS speakers so they match the amplifier pretty well, but most importantly, they're cheap and are supposed to sound reasonably good. Of course, where I've ordered them from has them back-ordered, so I'm still waiting on those to show up.

My initial design for the speaker enclosure is modeled after a basic dual subwoofer box and printed in wood PLA because I was out of everything else. 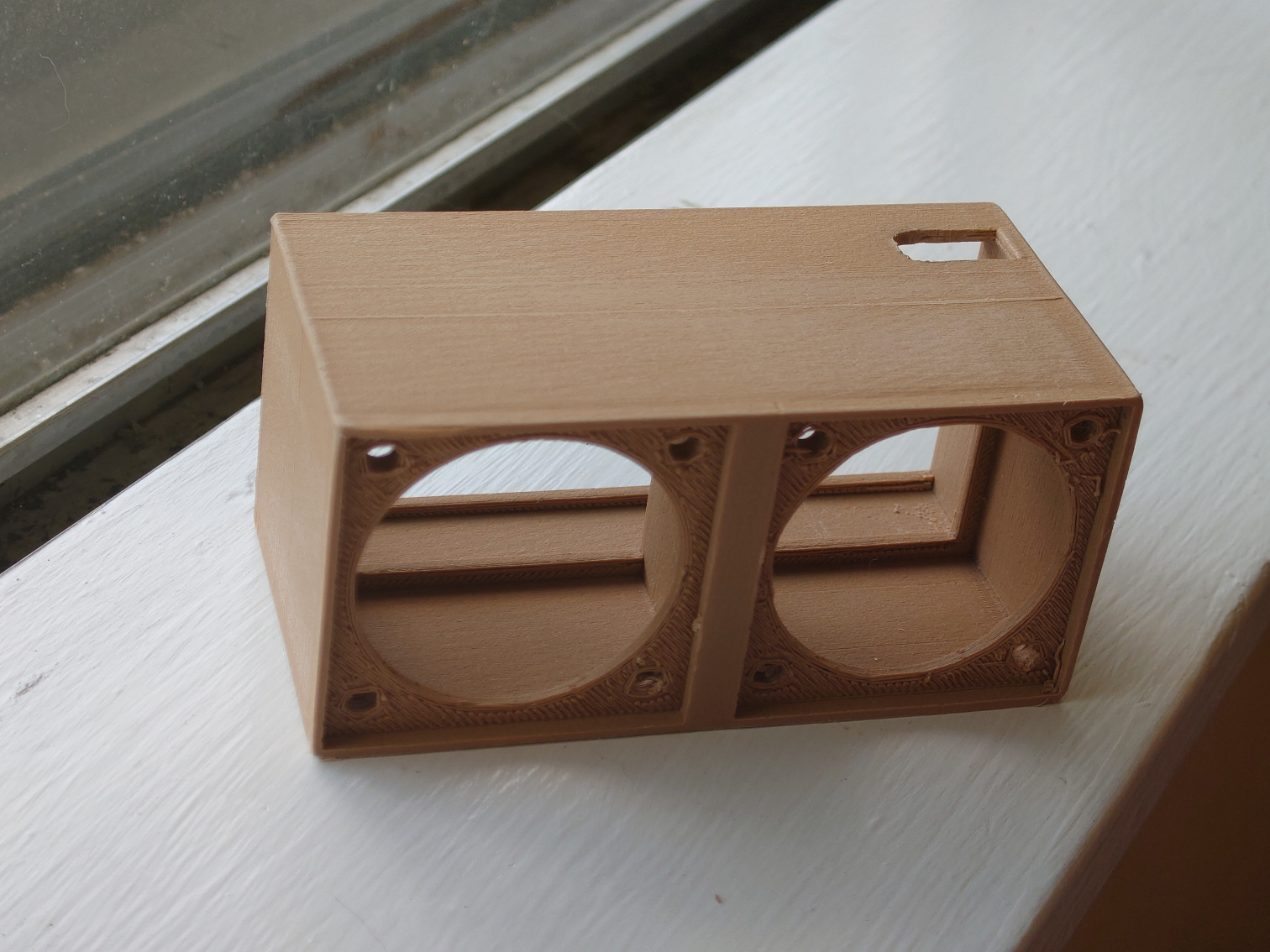 Each of the speakers will have its own sealed enclosure which I believe is the correct volume for the speaker according to the spec sheet, but it's probably off since there's not really any real displacement info available for the speakers and they haven't shown up yet, preventing me from measuring them like Archimedes in the bathtub.

A third section is located on the back of the box to hide the amplifier and wiring in. I've also put a XT60 sized hole in this section so I'll have an easy hookup to power, but I've already figured out that placing it on the far edge is going to interfere with most inner fenders, so that's going have to be moved on V2. But, I'm going to wait to print a second enclosure until I am able to do a test fit and listen once the speakers finally show up.

If you've somehow made it this far, rest easy knowing that I'm only planning on running this around the house not while out on the trails, since I'm not a huge fan of the whole "play my music real loud while out in the woods" thing.

Sphaxz said:
If you've somehow made it this far, rest easy knowing that I'm only planning on running this around the house not while out on the trails, since I'm not a huge fan of the whole "play my music real loud while out in the woods" thing.
Click to expand...

But how else will the birds and squirrels come to know the brilliance of Lil John?

SurlyBurly said:
But how else will the birds and squirrels come to know the brilliance of Lil John?
Click to expand...

Dang... I hadn't thought about the birds and squirrels missing out. How unthoughtful of me. I guess they'll have to make do with either using some tiny headphones or tuning into basically everyone else's Bluetooth speakers that they keep with them while hiking

Here's another little cruiser i started messing around with to have another Unique ride at the RC Trucking and Construction equipment meets. It's got a little bit different take on installing a "sound kit" When I saw this 'Canada Dry' Mercedes 560 SEC, at first glance i just thought it...
scalebuildersguild.com

Sharp looking sub enclosure.
How can you deny the birds and squirrels getting to hear Freebird for the 5,000,000th time? It's like you don't even want them to know they're free.

Hurry up and get your earplugs, the long unawaited update post is here!

The speakers I was waiting on finally showed up so I was finally able to do a test fit. Suprisingly, they kinda fit on the first go. Looks like the only things I've got to redesign on the enclosure is adding a few millimeters to the speaker sections, since it turns out, some pesky things called wires exist and they take up space that I didn't plan for. The only other things that I've got to change is moving the hole for the XT60 plug, since it'll interfere with basically any inner fenders being over on the very edge of the enclosure, and making the speaker cut outs slightly bigger to hopefully eliminate some buzzing. 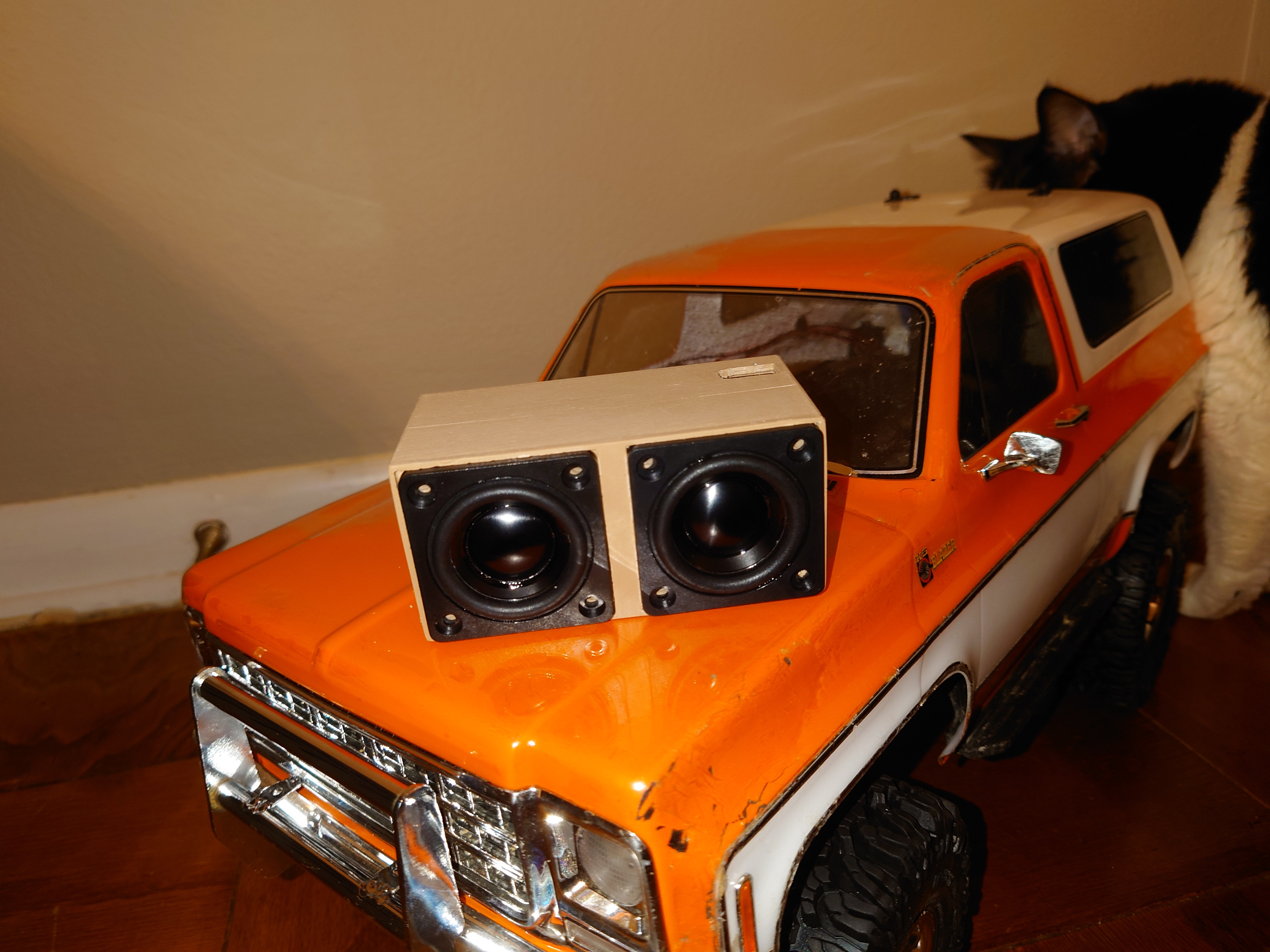