Articulated shock towers? why not!

I've been fiddling around my suspension setup and came up with this.
simple and effective, it add a nice articulation.
the idea come from a video on youtube which i modified a bit.
It is still prototype but i think the idea worth sharing.
Basically its just shock tower keys acting like a lever and its attached to the rails via some modified scx24 shocks.
(removed ball ends to fit bigger bolts and replaced the springs for stiffer ones) 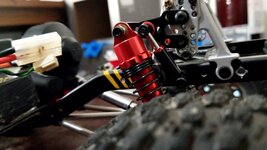 i think it's pretty cool, what do you think?

Sort of like shooter shackles for leaf spring, neat idea and clean execution.
But in the end there is not much reason for that much flex.
How's the torque twist on this setup?

there's surprisingly almost none forward.
There is a little twist on reverse tho when i give it full throttle but i never backup fast so i can live with it easily.

zanthrax said:
But in the end there is not much reason for that much flex.
Click to expand...

yeah.. just testing things out on my first rc haha
so my main reason is just plain fun and keeping my mind creative

little update in case someone is interested in the future...
in the trails; it give me in incredible smooth ride.
crawling; it affect the steering too much.
removed at the front kept the rear ones and all good go well