This truck was dropped off to the shop is this shape, as the customer got in over his head slightly. I was asked to sort out the little issues and do some styrene work on it. It might go further than that but we will see.
The body is designed by Scale 3DRC and printed in abs. The chassis is a rc4wd leafspring scx10 chassis with a gcm trans. 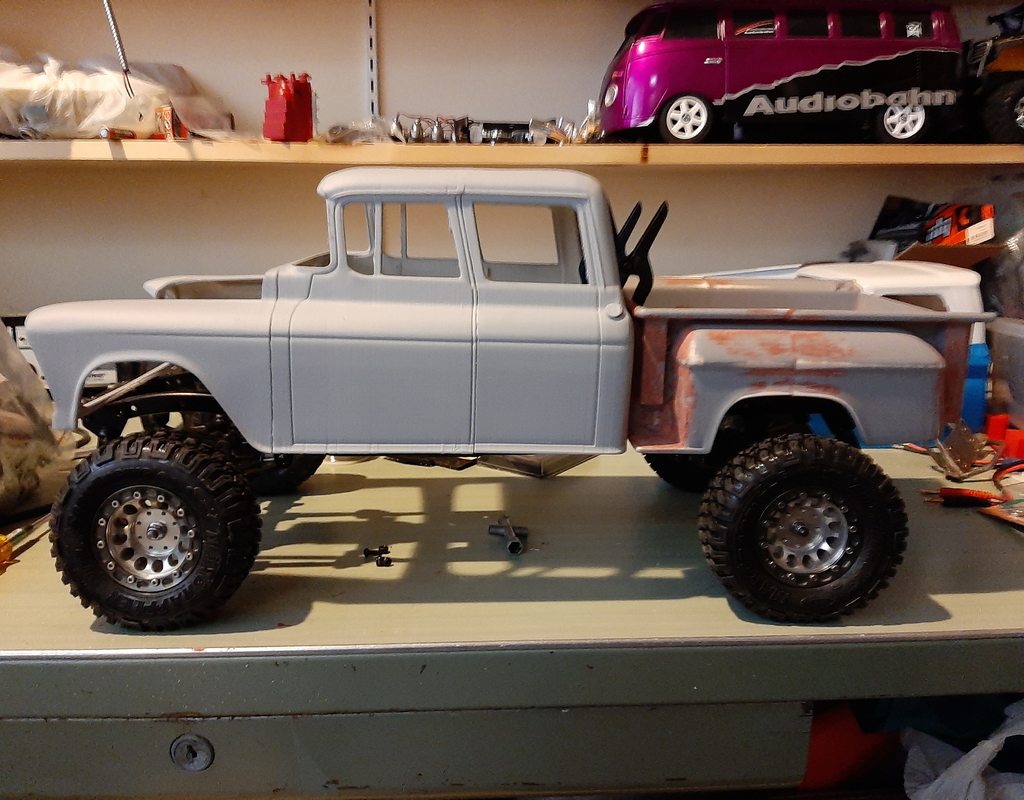 The customer asked to see if it was possible to under slung the ar44 axle to try and lower the truck. It is possible but would require a 3 or 3.2 tall wheel to fit the opening. Ground clearance is really lacking at that point, but it is doable. 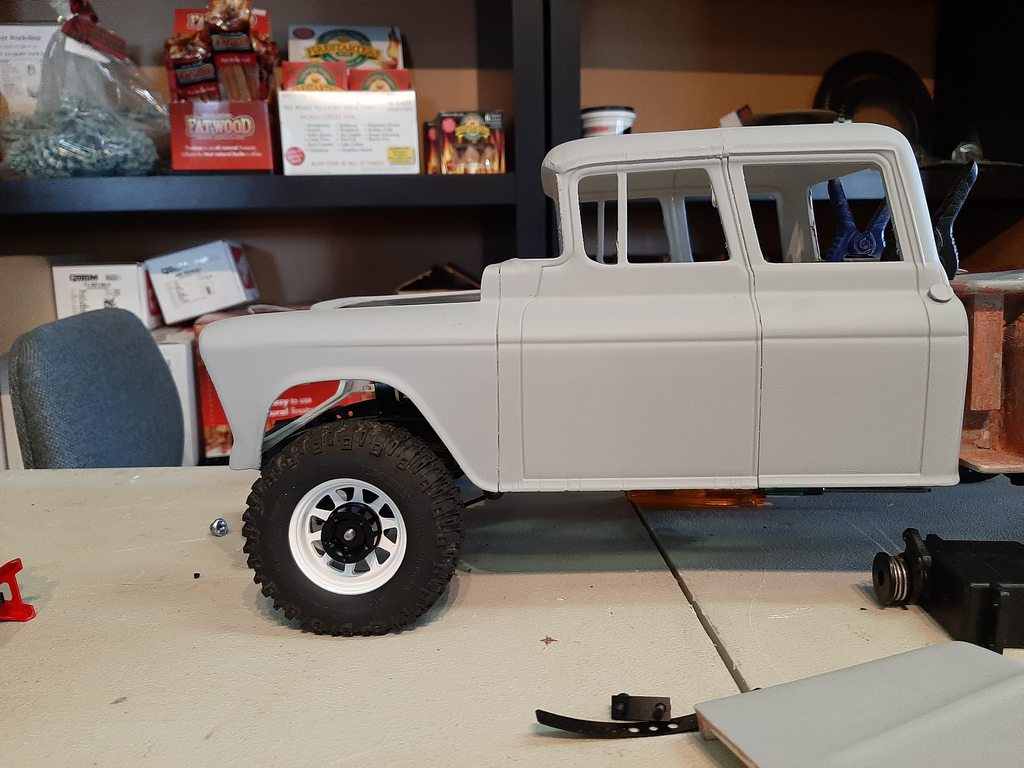 The first big issue is that the gcm mount wants to sit right where one of the bolts for the leaf spring is. 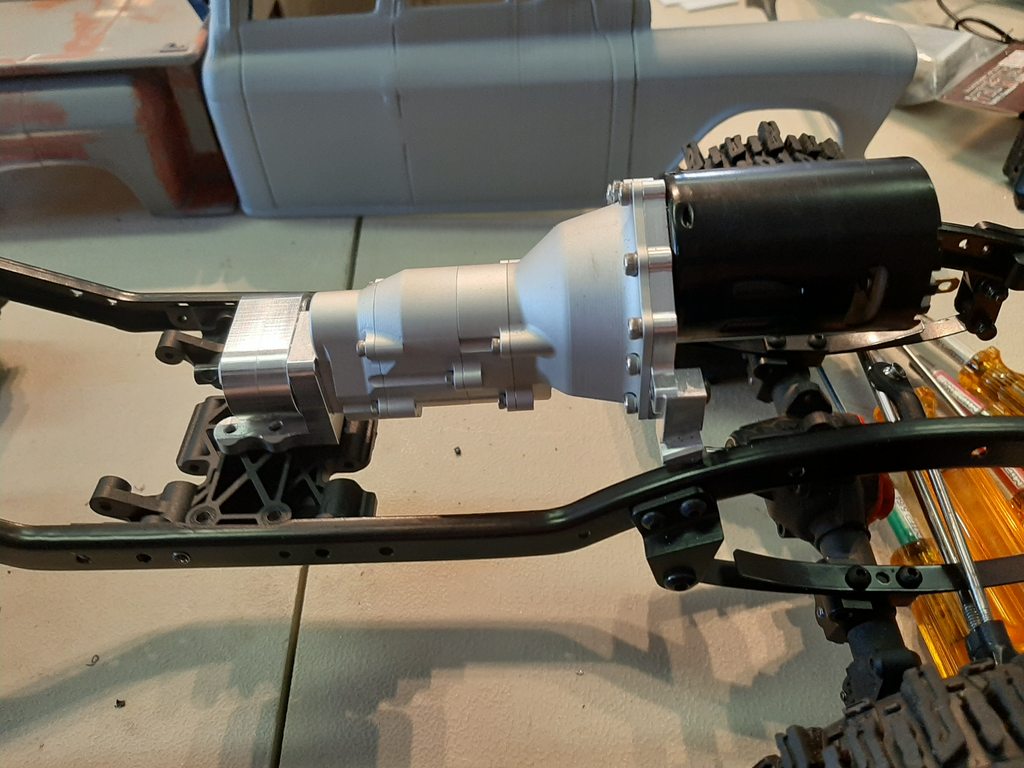 The mount got a slight trim to clear the head of the bolt. 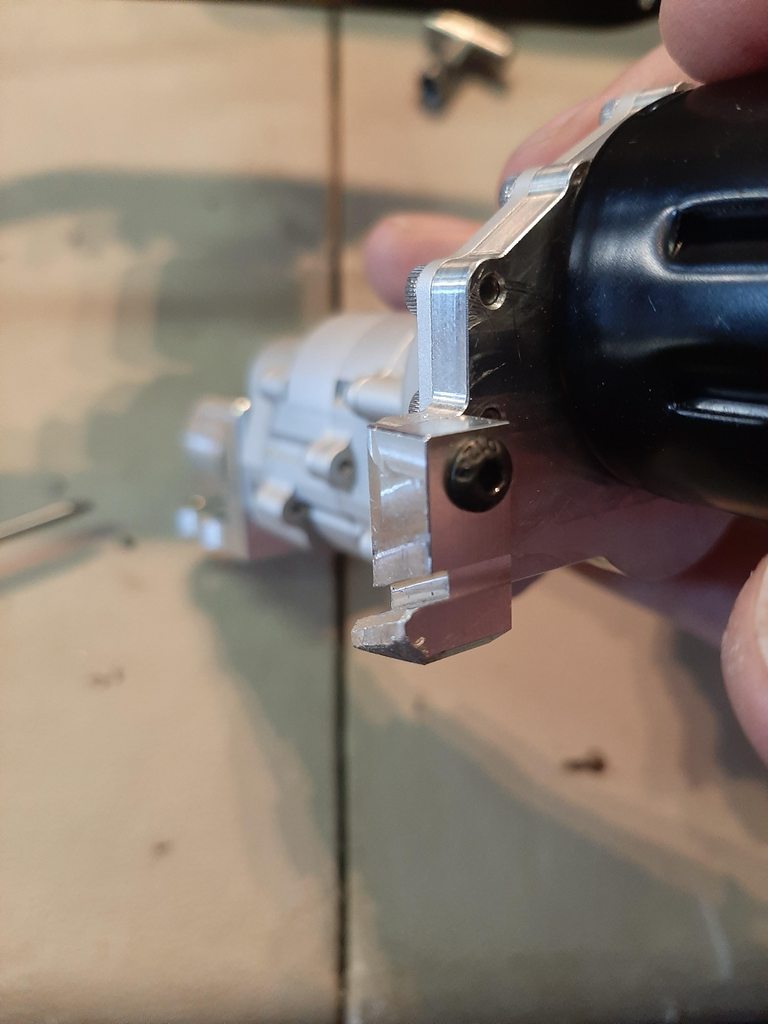 The mount in place with the bolt and nuts flipped in the mount. Now everything clears just barely. 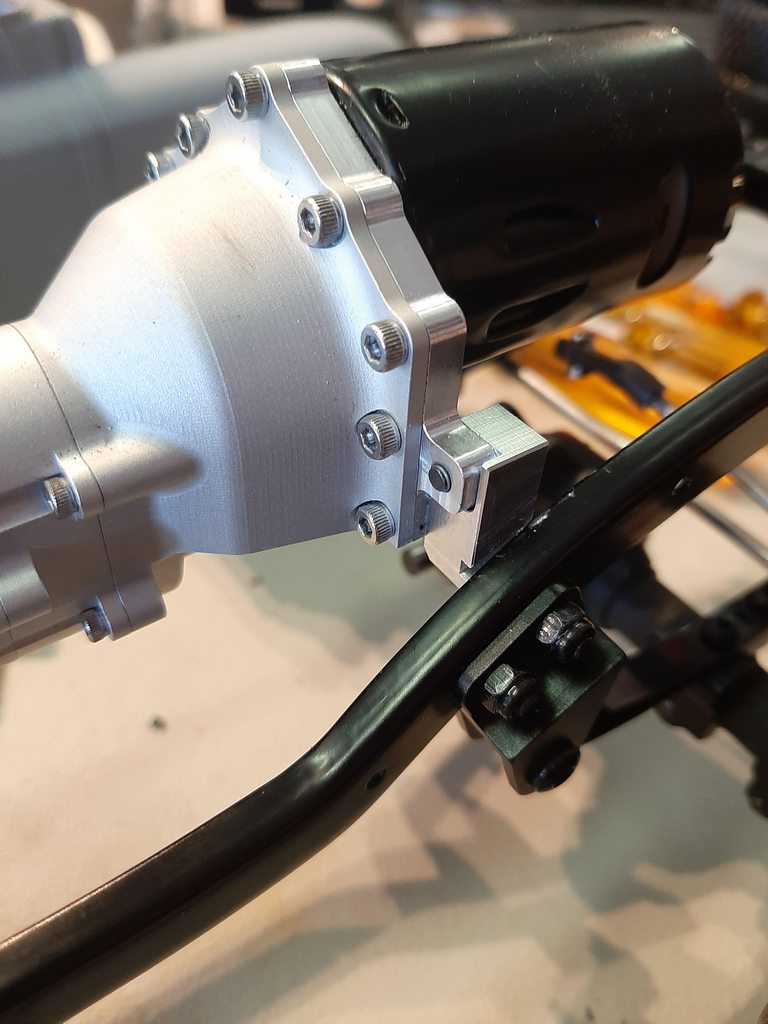 Overall shot of the chassis, with everything back in its place. 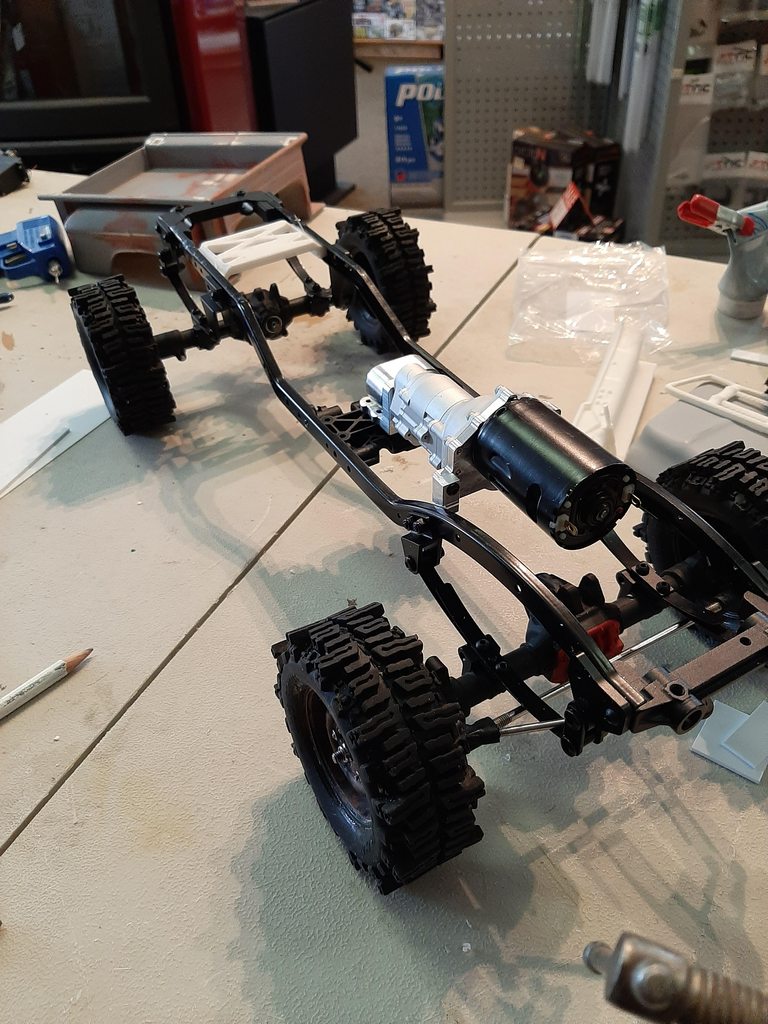 Next mod was to change the front wheel opening so that there is a little more clearance for the front wheels. About 3mm at the bottom of the front of the opening was removed and tapered up into the curve 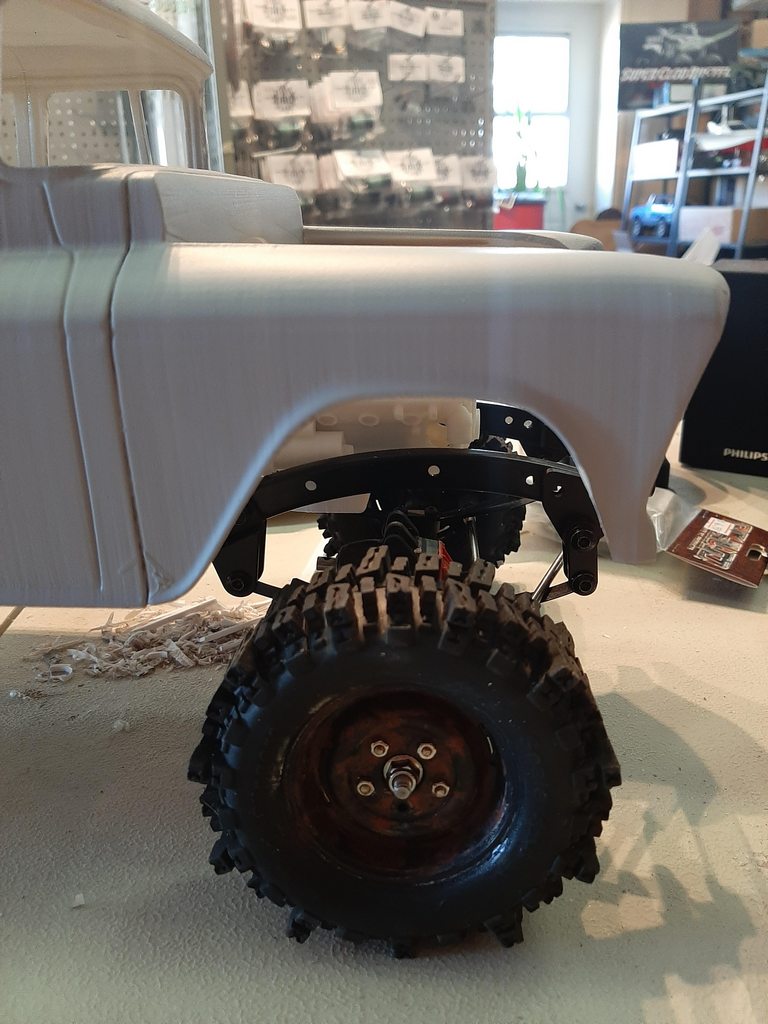 The next part was to fill in the gap at the back of the cab. As the floor is full depth. 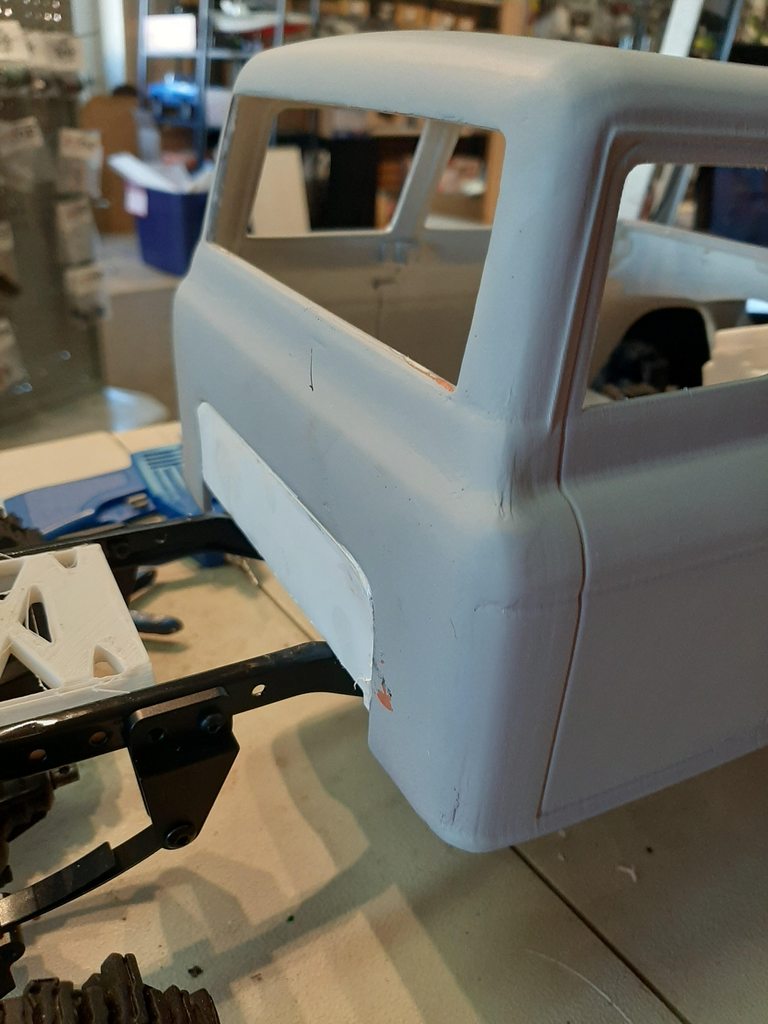 The floor than got cut out out of a sheet of styrene. For now i am only cutting out enough to get pieces where i want them. 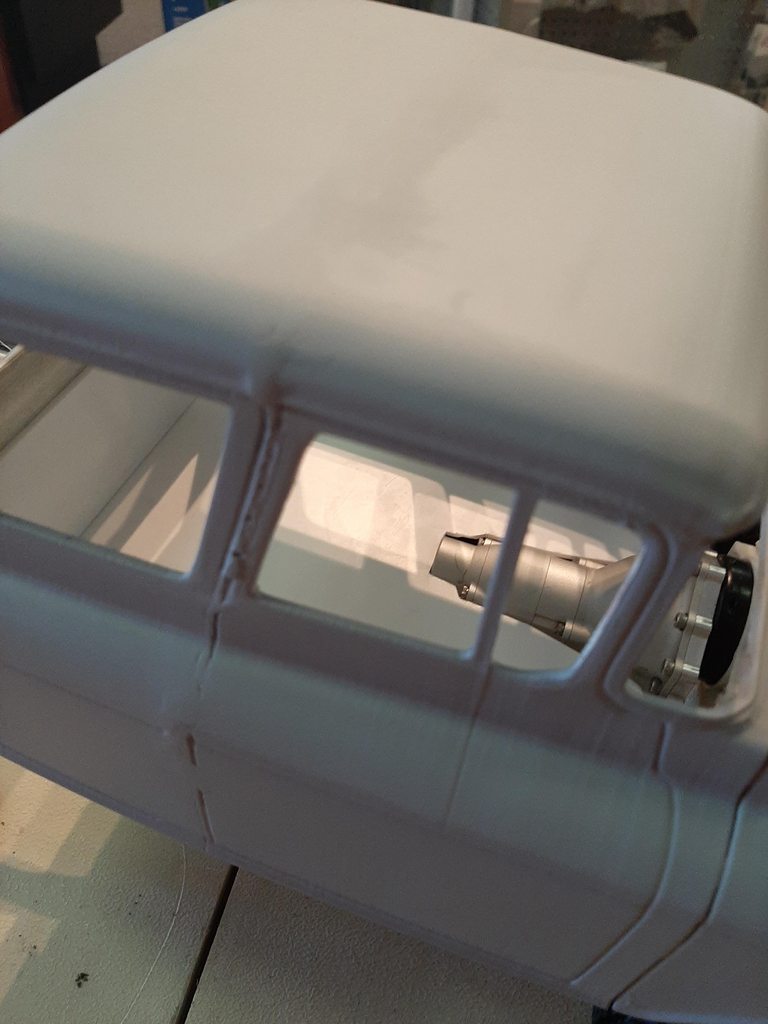 Next up was building a firewall. I went right over into both fenders to seal off any holes that show up. Also trying to replicate the way the real trucks are built. 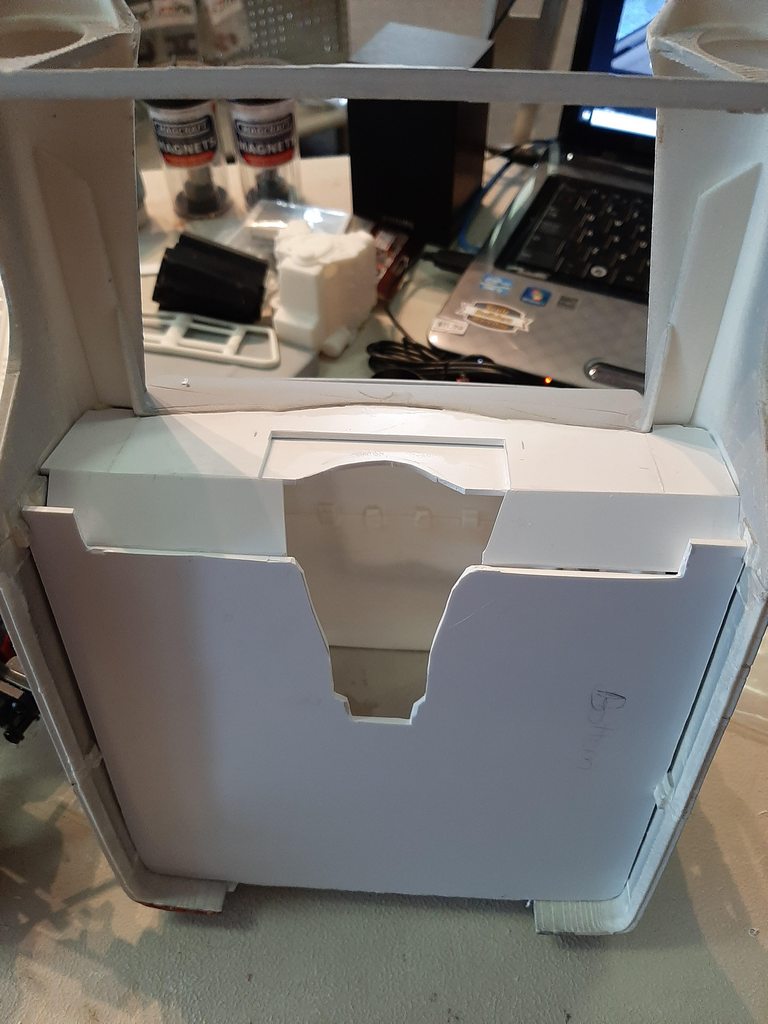 Then i made the door card base. These are glued into the body and will have the inner door panels glued on top. The base also becomes the way the floor get screwed in place. The back wall got some styrene added just for the floor to rest on. 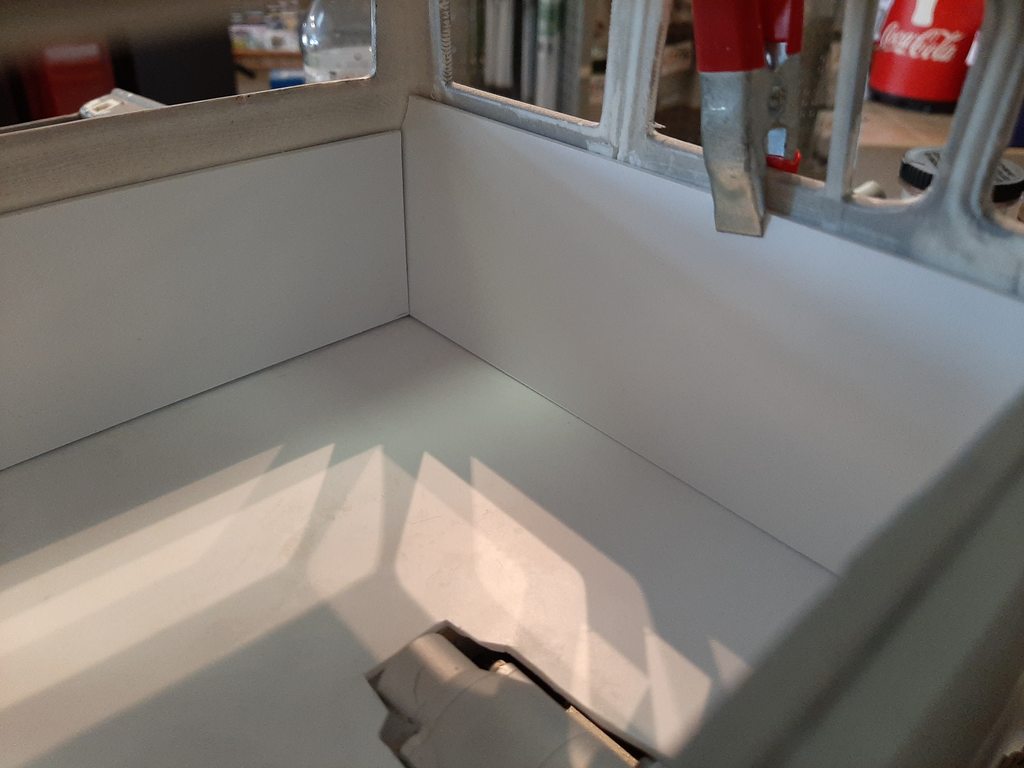 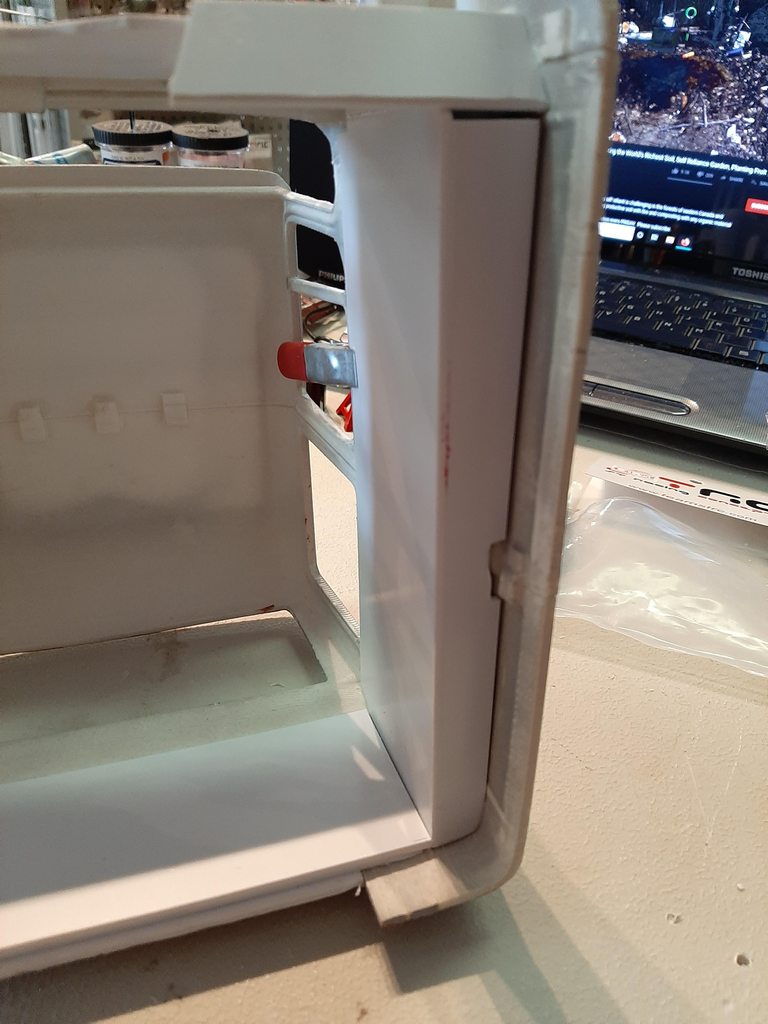 Everything sitting all together on the frame. 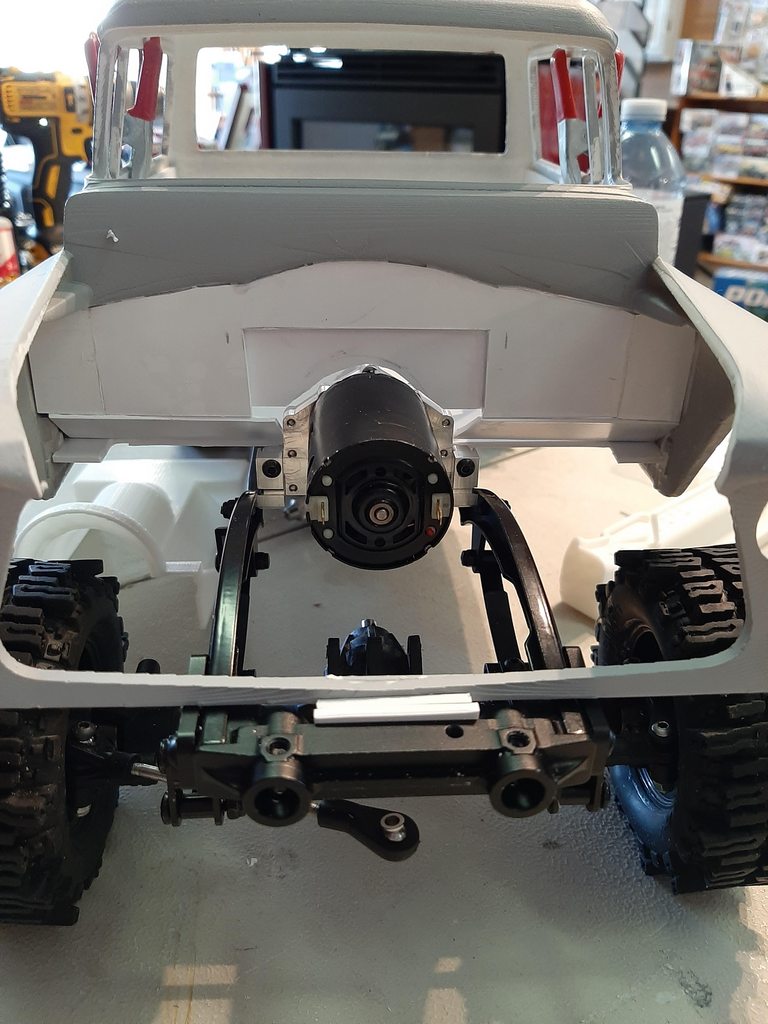 During working on this truck and everything else, i also designed a truck dash to print. Because its a truck of course. 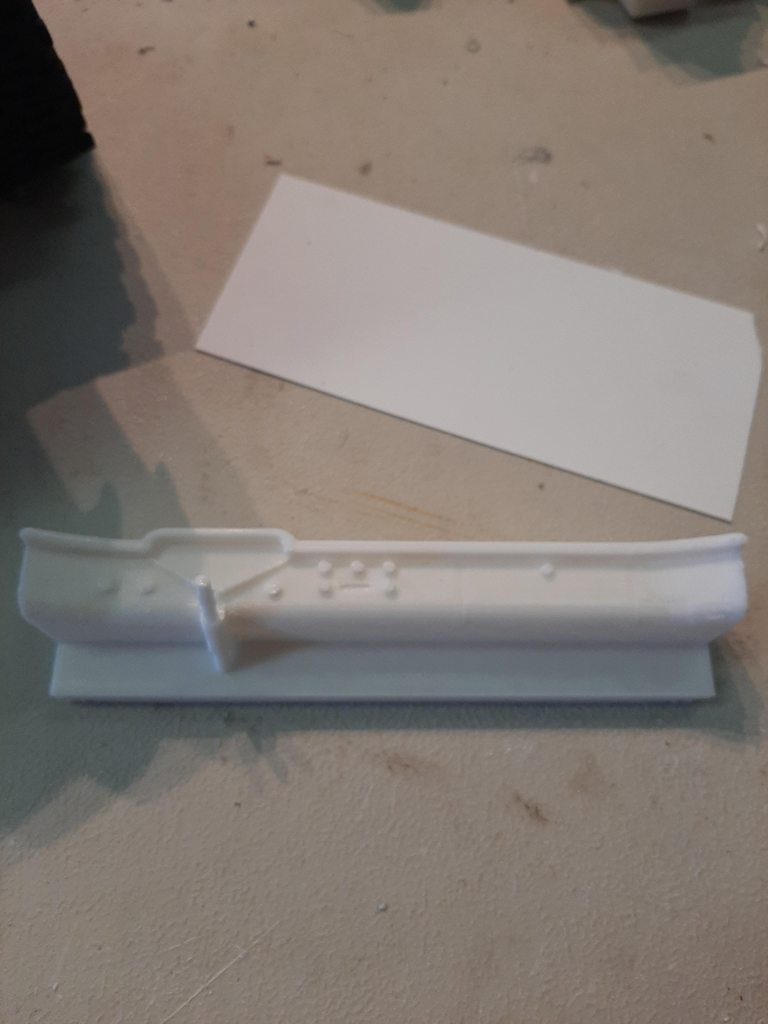 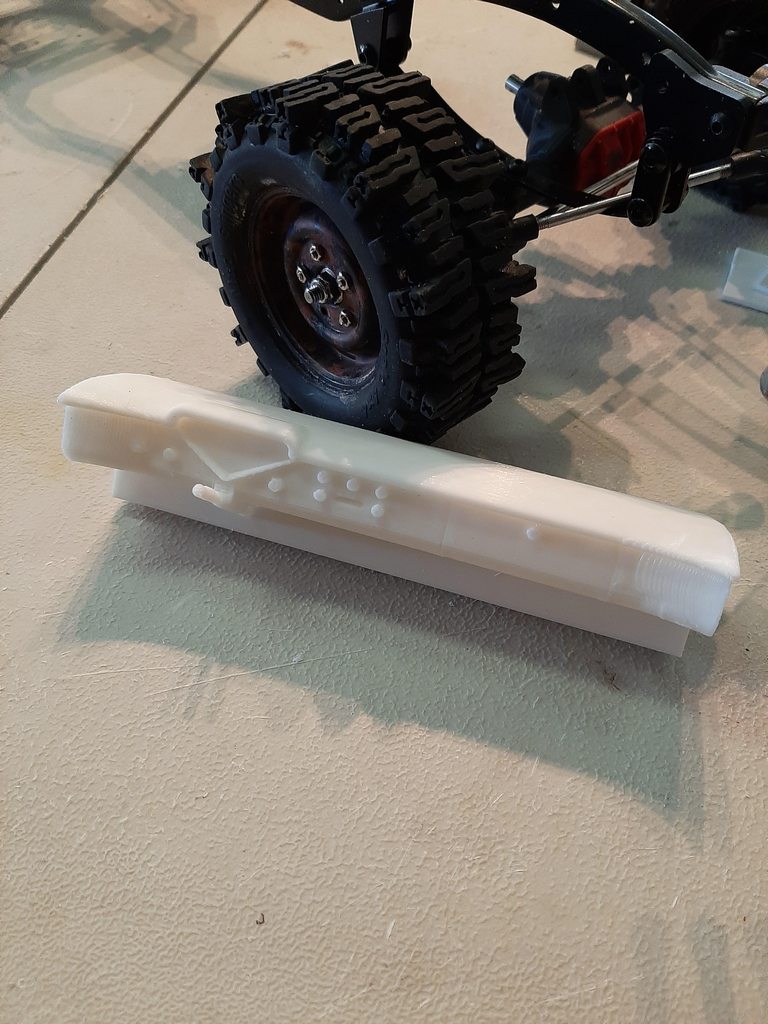 The front grill is going to be different than the designer created. It will be more like the 55 crate grill, but not quite the same. 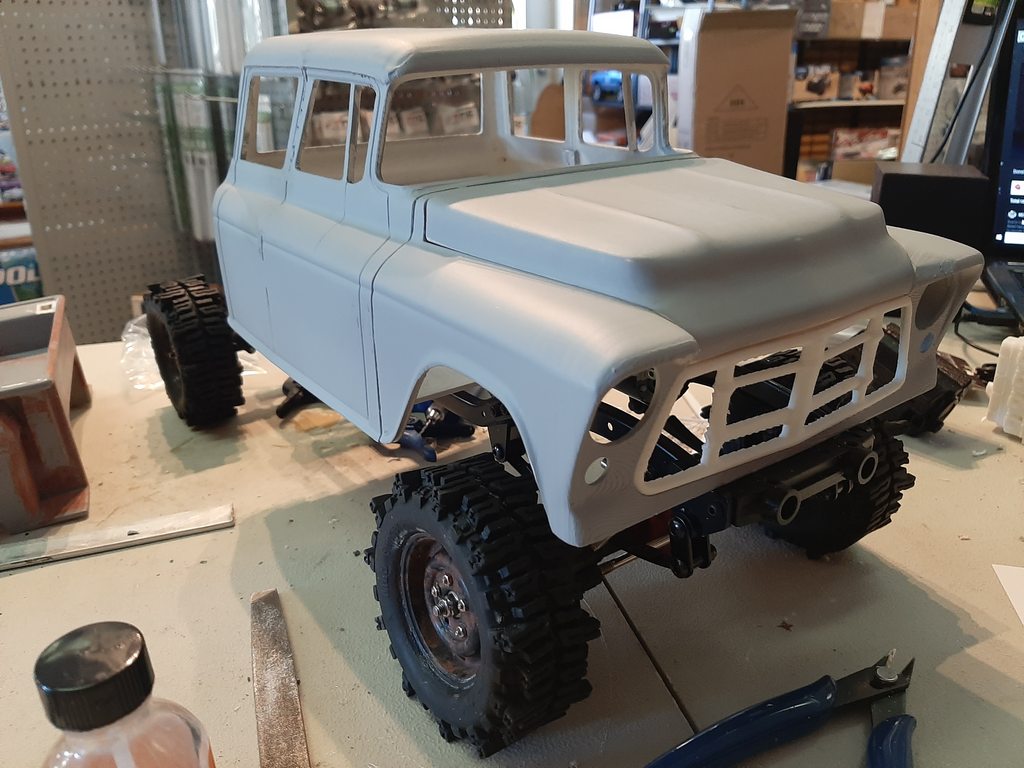 Under the hood will be one of my small block chevy motor, but making some changes to it so that it replicates a 265 motor that would have come in the truck. The overall goal for the truck is to be a resto-mod with a lift and nice set of wheels. Most everything else will be stock looking and some what plain, just the way a work truck would have been ordered.

This one will be unique for sure.
Lucky customer no doubts, its in good hands to be finished up.
More please.
J

Craig your the man, I can’t wait to come take a look at the work.

Looking forward to following on the journey!

Thanks guy for all the great comments. This trucks is kinda a blast to work on, seems all the custom bits are just coming together easily.
The inner fenders worked out decent and will have some magnet mounting in the lower edge to hold the front of the body down. 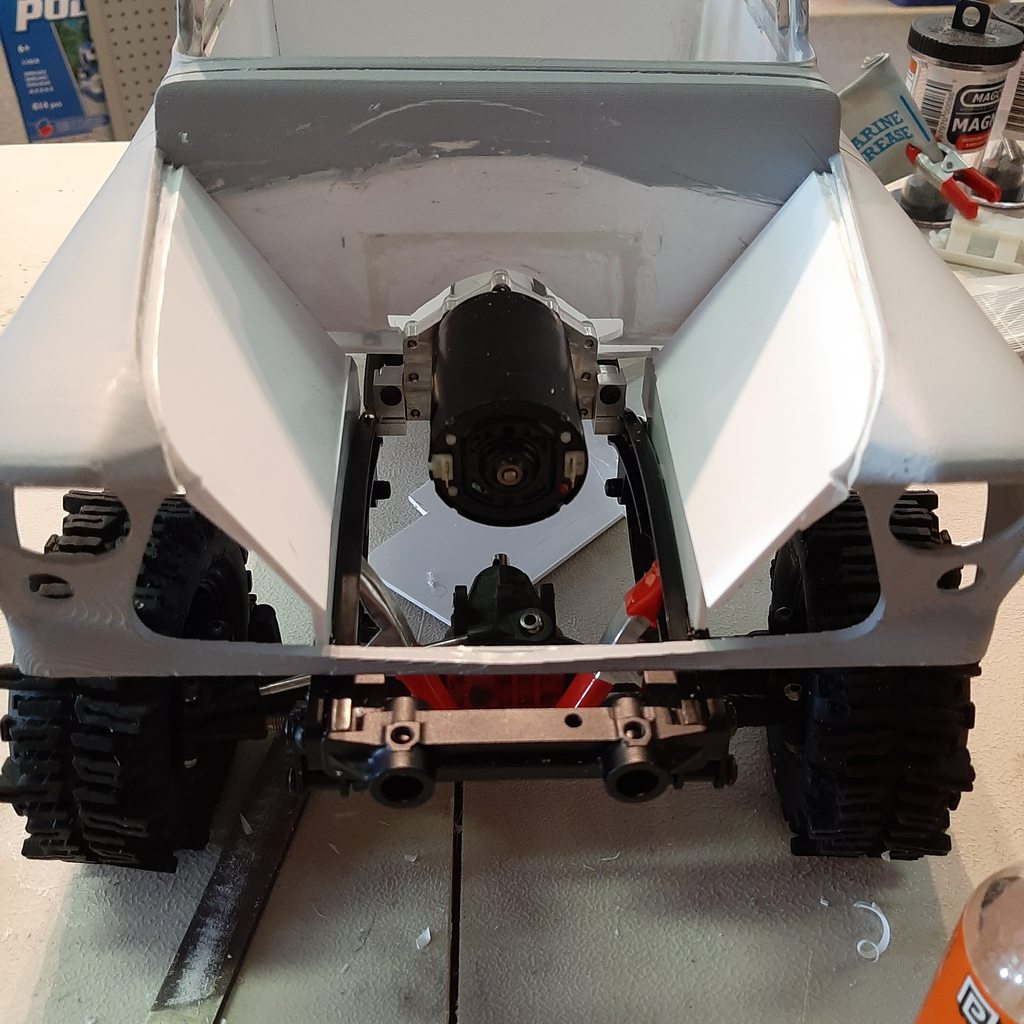 The customer made a small power change and now the truck is getting a big block chev motor with 2 four barrels. The tunnel ram just doesn't clear the hood right. 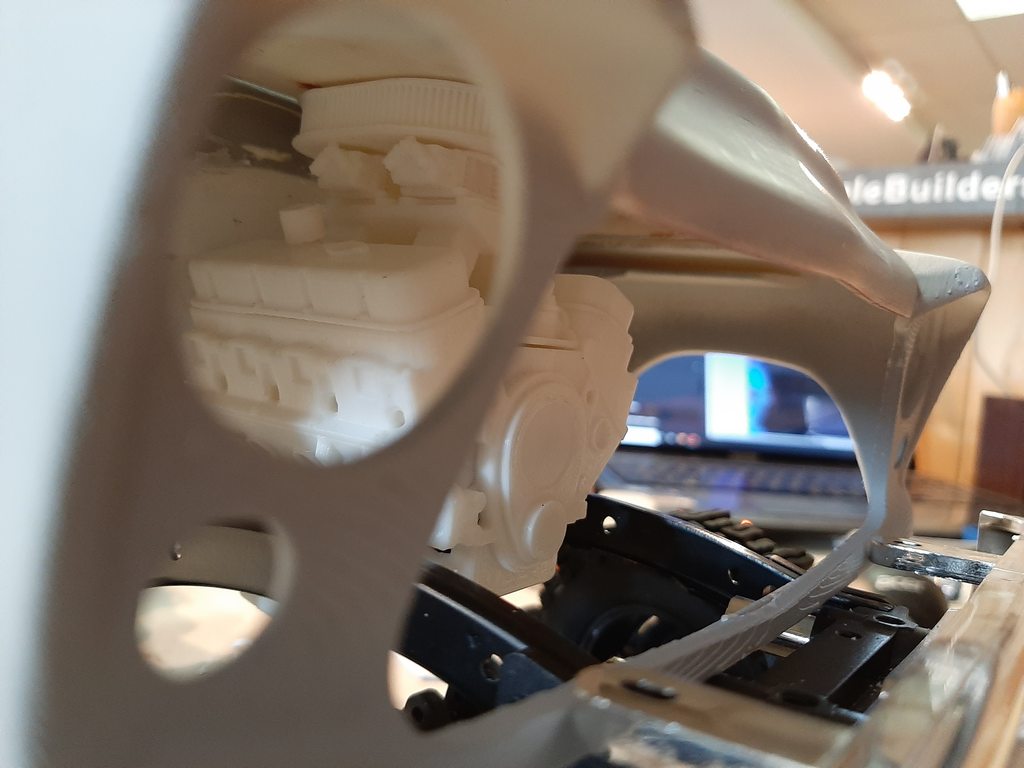 So a vintage style 2x4 manifold has designed up in TinkerCAD and will be printed shortly. 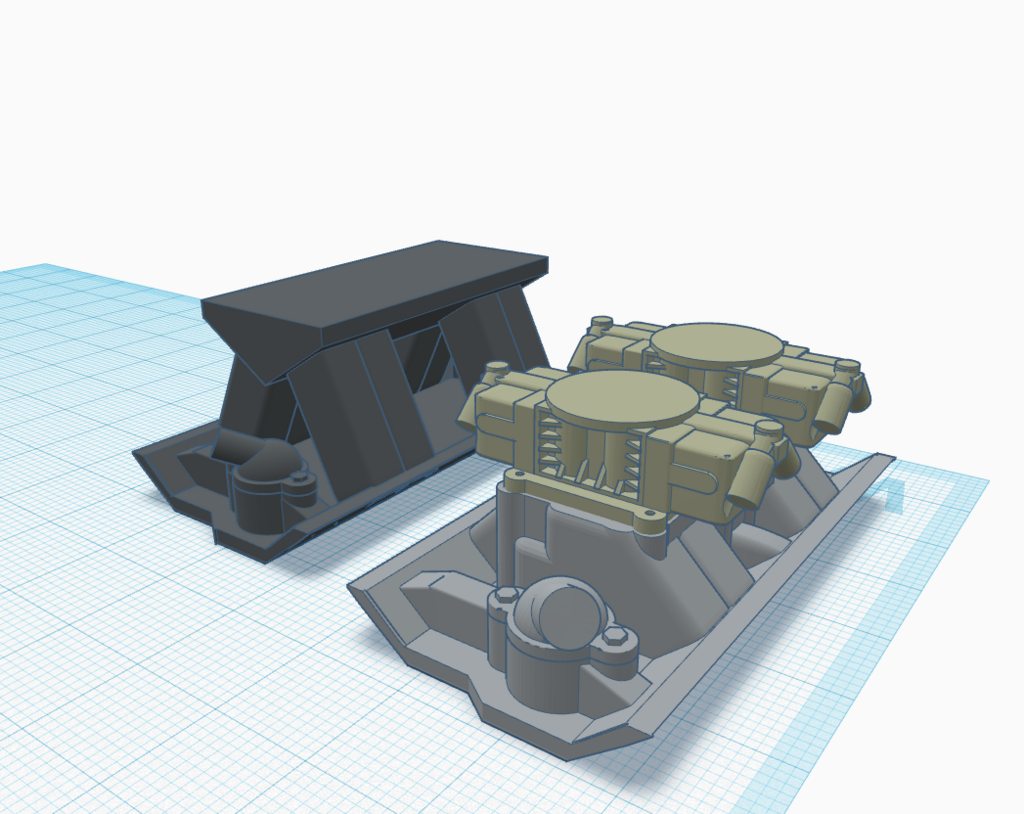 And of course you need headers.
Long tube headers might have problems staying put and i would have to hack holes in the inner fenders. Some mid length seem just right and i can use part of the motor mount to support the end of the header. 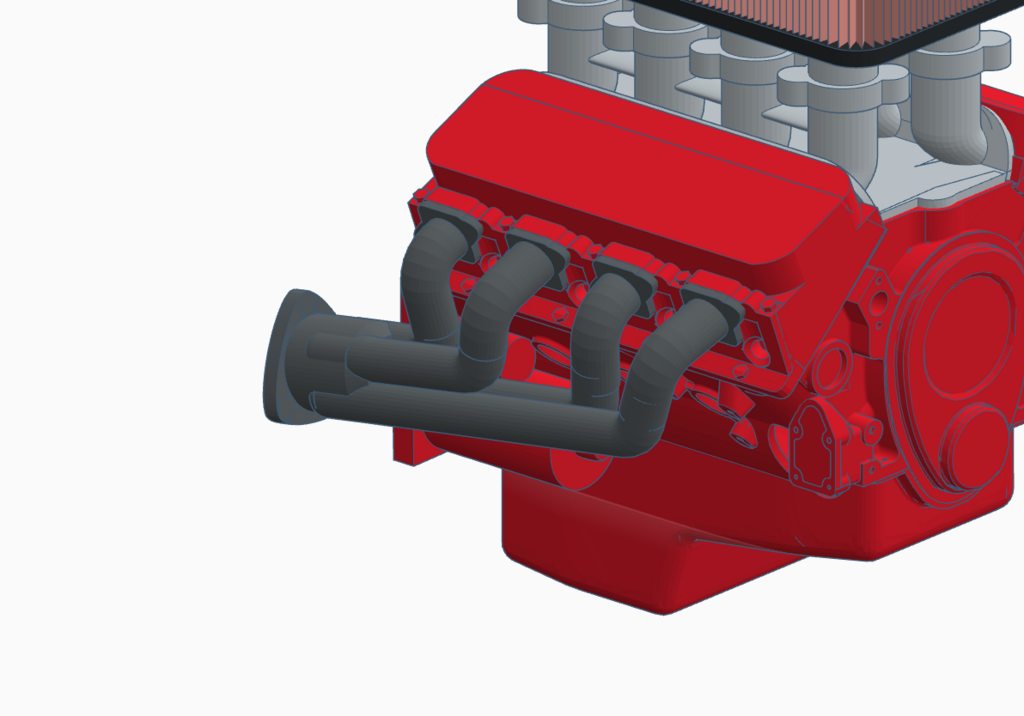 First is the new tailgate for the box, as the truck is trying to stay as stock as possible on the outside. 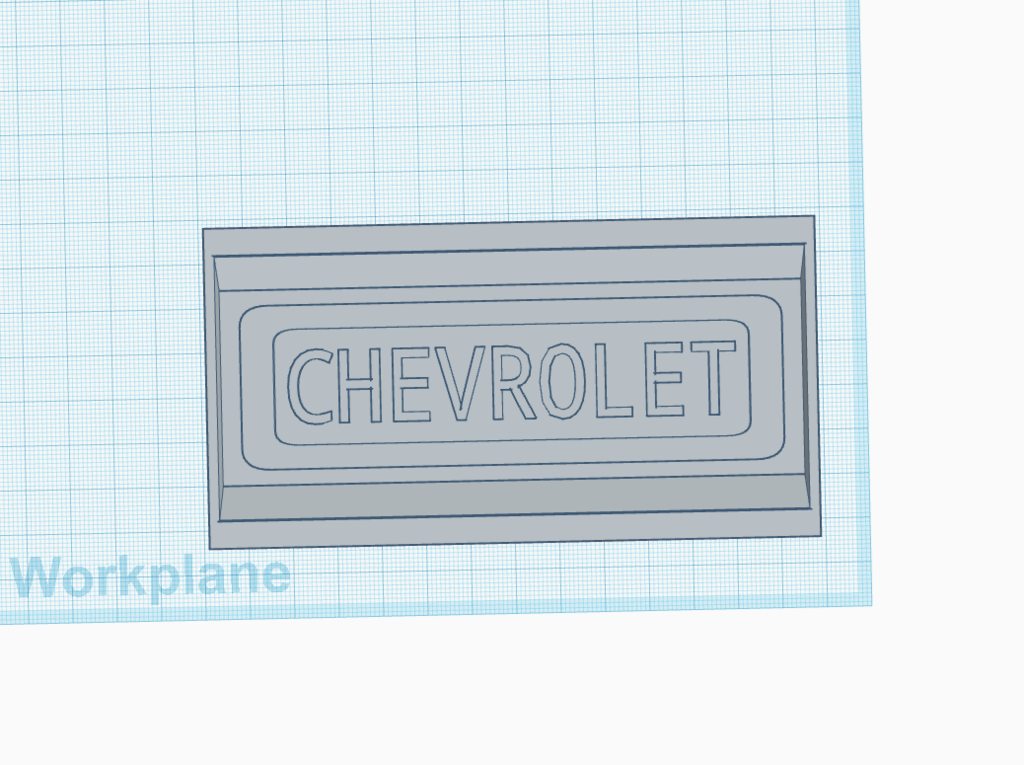 Also the new motor with all the new pieces on it. 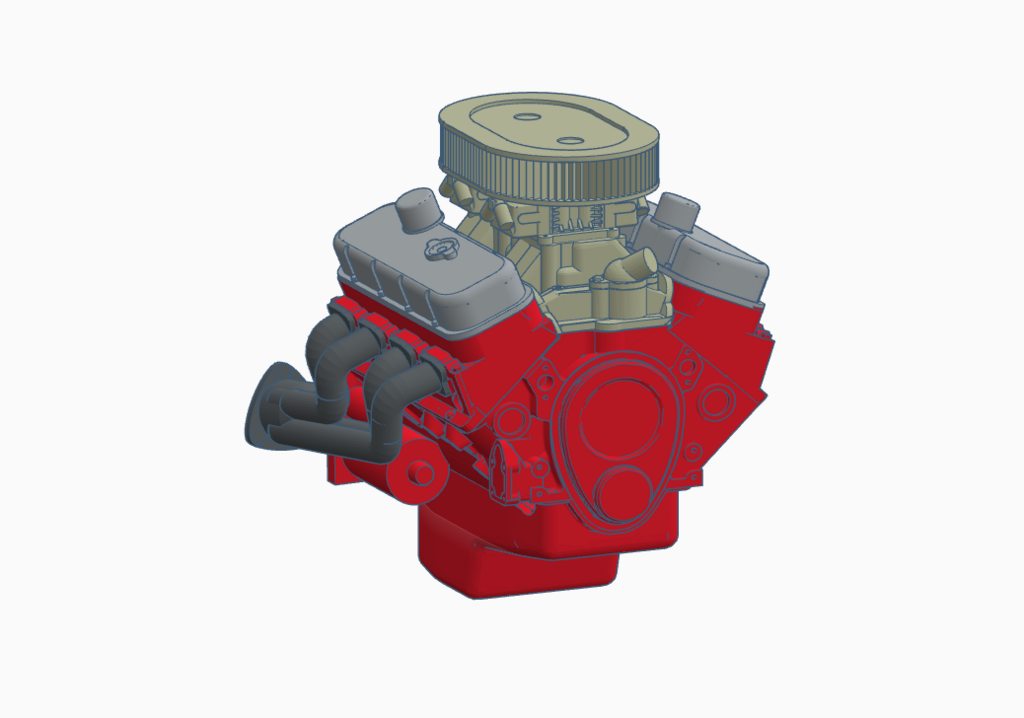 Of course the mid length headers won't fit. So i designed a full length set of headers that should go under the tranny mounts and just clear the frame. Won't know until i print another set. 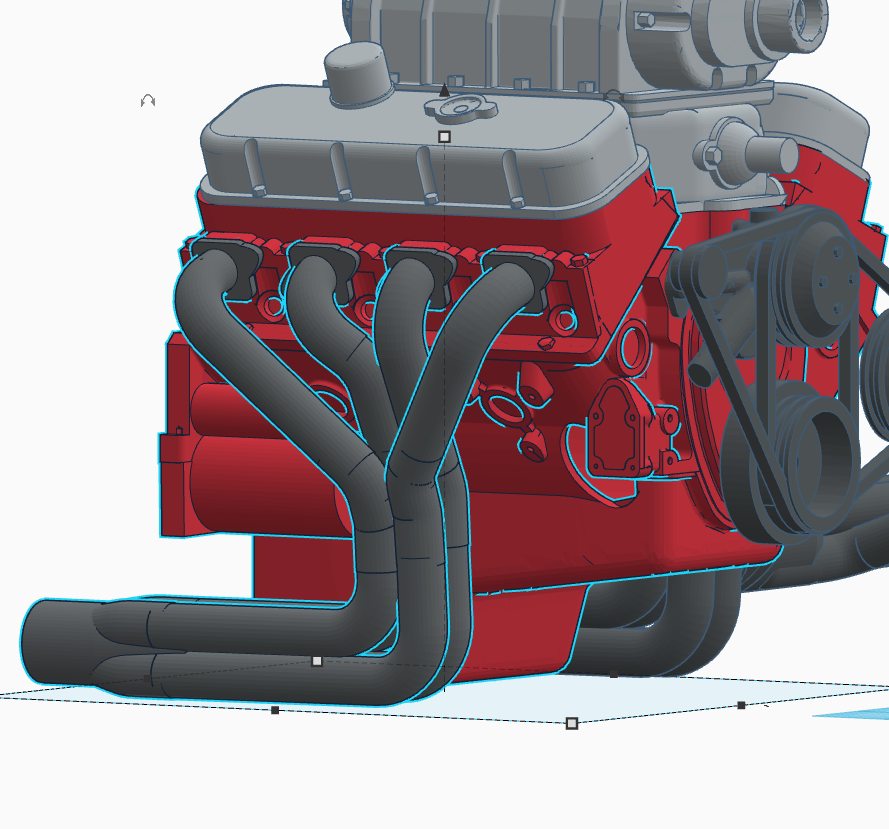 I also now have the inner fenders glued in and built a rad cradle to hold the rc4wd rad. I also wasn't happy with the hose as they are supplied. I wanted them to look like a formed hose, so was looking for something to fit inside. Turns out solder fits inside perfectly and bends so nice and easy 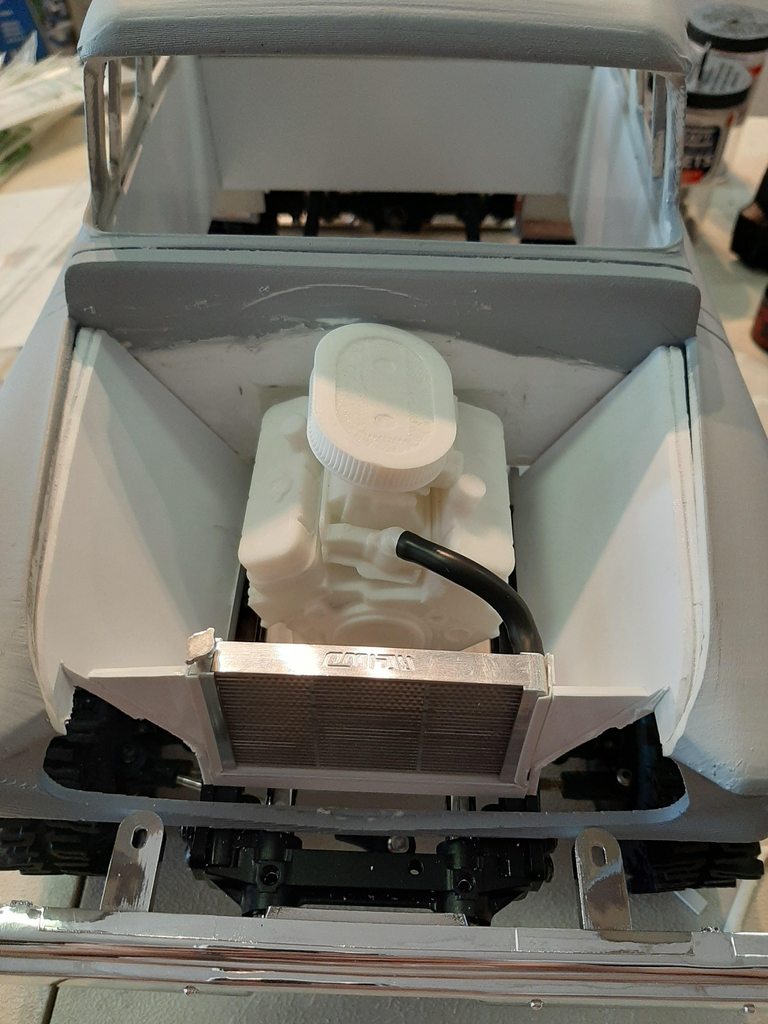 New goodies are the bomb.

This is coming along great. Can?t wait to see more.

Post up some more progress, I’m extremely impressed with the work your doing and can’t wait to get out and talk some more ideas, and oh ya bring the lense’s for the lights..

I got into a building mood the last couple days while it was slow at the shop and got some little details knocked out. The whole grill area is now closed in and the whole truck body is very rigid. 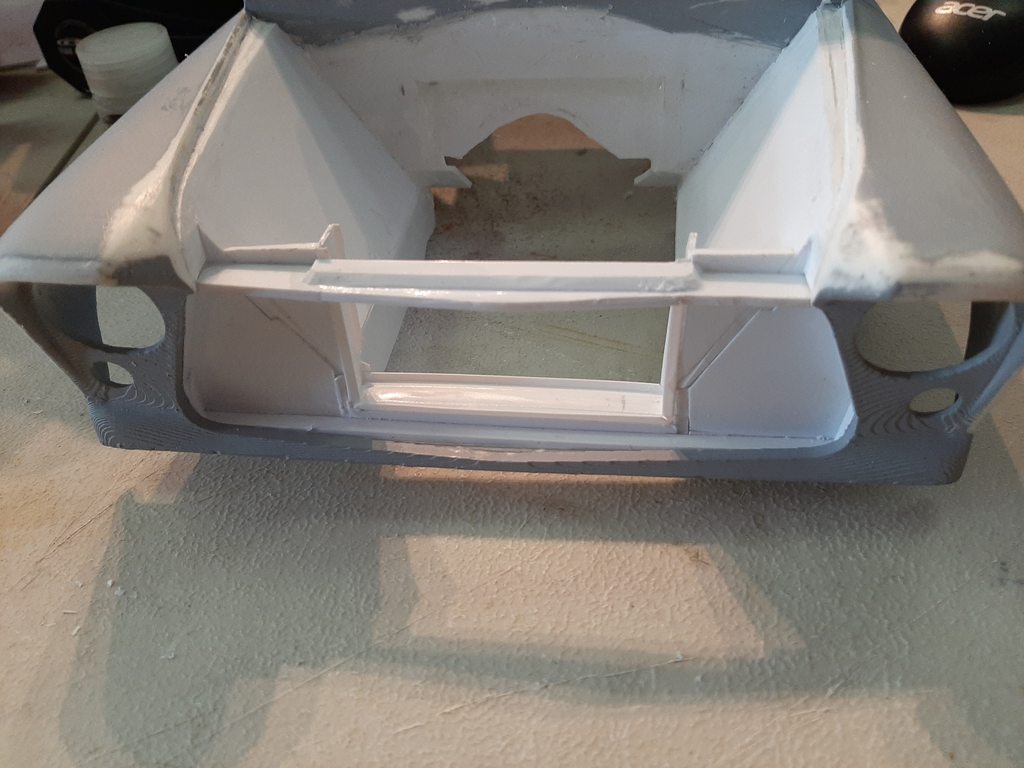 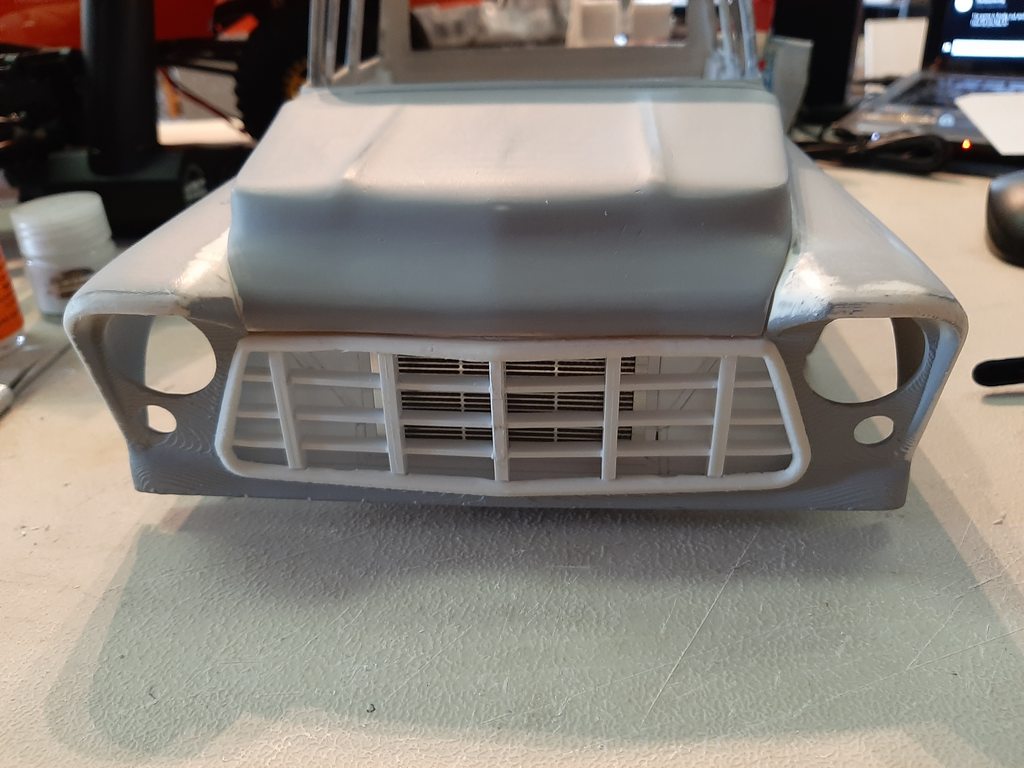 All in place and just about ready to start body work 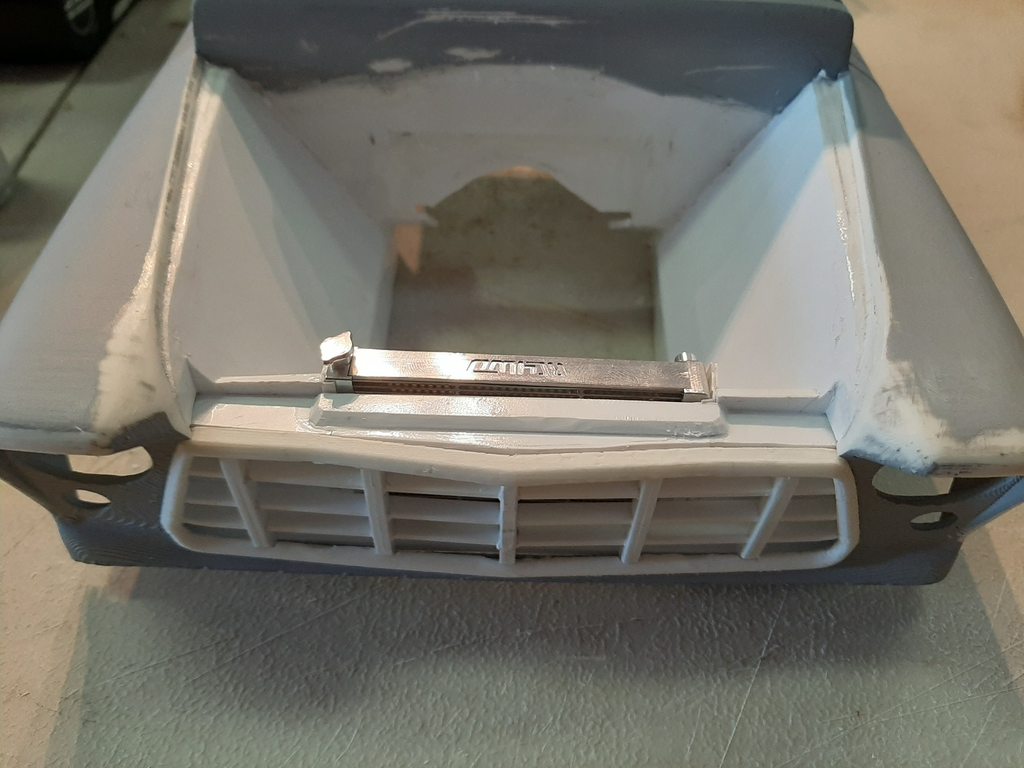 this is really nice.

That radiator is cool.

Thanks guys for the kind words.

Not much progress this week, as things have been busy. I did get some body work done and the first coat of scratch fill primer on the cab. 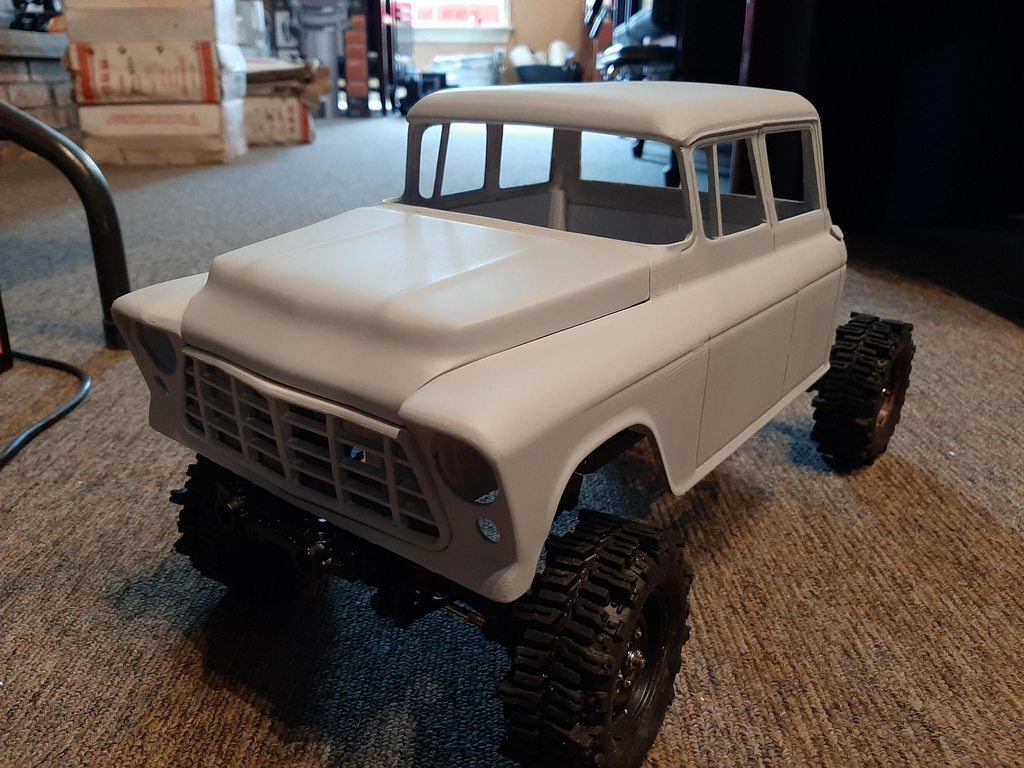